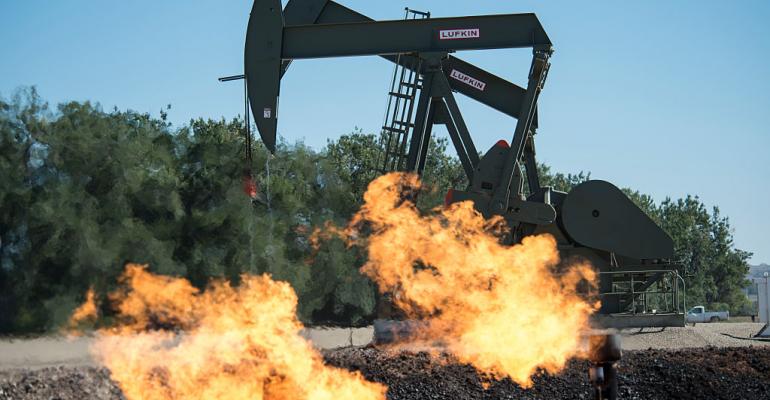 Naureen S. Malik (Bloomberg) -- A Denver-based company that installs data centers at shale drilling sites to take advantage of excess natural gas supplies says it now has eight operations across the U.S. and plans another 30 in the first half of next year.

The centers are being touted as a way to solve the growing problem of gas flaring, where energy companies burn off excess gas. Flaring has risen to a record in Texas this year amid a lack of pipeline capacity.

Closely held Crusoe Energy Systems Inc. is harnessing some of the surplus gas at source to turn it into electricity, powering the data centers that in turn generate revenue by mining Bitcoin. The company will install 70 units next year, each with a capacity of about 1 megawatt, which would keep about 10 million cubic feet a day of gas from being flared, Chief Executive Officer Chase Lochmiller said in an interview.

“It’s a very creative way to solve an environmental and economic problem for the oil and gas industry,” said Alex Urdea, the chief investment officer of Upper90 Capital Management LLC, which has agreed to provide Crusoe with $40 million of project financing. The business model is attracting interest from large oil and gas producers, and it could eventually involve revenue sharing, he added. Crusoe also raised $30 million by selling equity to investors including Bain Capital Ventures.

Earlier this year, Crusoe raised $5 million of seed capital from investors including Winklevoss Capital Management LLC. Multiple units can be deployed at a single site to build scale. As the number of active units increases, Crusoe plans to start using some of that computing capability to develop a new artificial intelligence cloud-computing service.

--With assistance from Catherine Ngai.