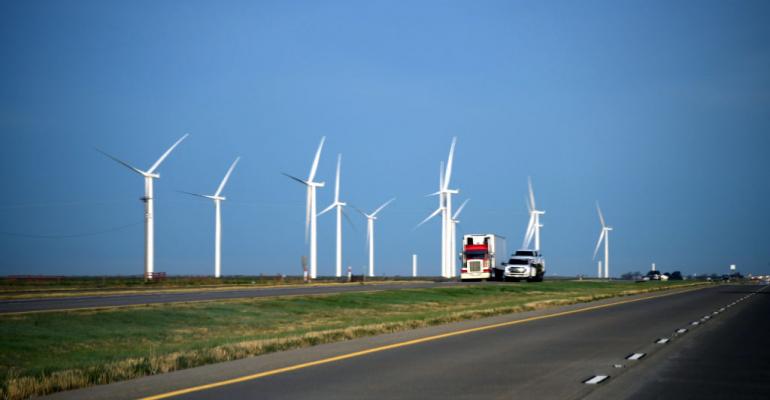 As weather becomes increasingly unpredictable, so do prices in the state’s uniquely deregulated energy market.

In the early afternoon on July 2, energy prices in Texas briefly spiked 25-fold, reaching north of $920 a megawatt-hour before dropping to $30 or $40, Bloomberg reported.

The spike – it appears to have been caused by a combination of hot weather (which causes air-conditioning use to rise) and less wind spinning the state’s many wind turbines than anticipated – didn’t last long enough to cause much turbulence in the market. But it did underscore the unique conditions big energy consumers, such as data center operators, work under in Texas’s deregulated energy market, where bitcoin-like fluctuations in energy prices are common.

The price spikes also fuel concerns that, as climate change causes more and more unpredictable weather events, and as more and more weather-dependent renewable generation comes online, grid operators will find it increasingly difficult to forecast energy demand and match it with adequate supply on their systems. That means higher risk of outages and more exposure to price volatility for customers in deregulated markets.

On the other hand, the flexibility of deregulated energy markets gives big energy consumers exponentially more options for sourcing renewable energy. Many regulated markets, which are often single-utility monopolies, either don’t offer any renewable options or offer options at uncompetitive rates. On several occasions, companies like Alphabet or the data center provider Switch have spent years lobbying – and in Switch’s case suing – utilities and regulators in such markets just to be able to buy renewable energy for their facilities at rates that make business sense.

The primary mechanism data center operators in Texas and other deregulated markets use to hedge against price volatility are long-term fixed-price contracts with energy producers. Depending on market conditions and its needs at a point in time, a company may “lock” its price for a few months or a few years ahead. They don’t usually do that for their entire load in a market but for enough of it to avoid serious exposure to unpredictable swings.

This strategy usually works, but it can only do so much to buffer against spikes that are high in magnitude and lengthy in time, Jeff Hanson, director of energy supply chain at Digital Realty Trust, told DCK in an interview. Digital Realty owns 31 data centers in Texas, totaling 105MW of capacity.

Digital had enough energy secured at a fixed price to protect it against the short-lived spike earlier this month as well as “a few spikes last year,” Hanson said.

But the rates can jump high enough and stay that way for long enough to affect the company’s operating costs, he said. The spike up to $900 per megawatt-hour this month was high, but the cap on energy rates in Texas is $9,000, he pointed out, “so, it can certainly get a lot higher.”

The last time there were sustained price spikes in the state was in 2011, “when we had a very hot summer in Texas, and that, coupled with a drought, resulted in having many hours of price spikes,” Hanson said.

David Rinard, senior director of global sustainability at Equinix, which operates nine data centers in Texas, said price spikes were common, caused by factors including weather-related fluctuations in renewable generation and the retiring of coal-fired power plants, but so far, none have been long enough to affect Equinix’s operations.

While price volatility is common, its extent can be controlled by “reserve margins” grid operators build into their supply-demand projections. In other words, an operator plans to have somewhat more power on the grid than they expect will be needed.

In Texas, this reserve margin is usually smaller than in any other market in the country. While it doesn’t seem to have caused major problems for customers so far, it is something big energy consumers like Digital Realty and Equinix pay close attention to.

Price spikes like the one this month occur when the operator – which in Texas is an organization called the Electric Reliability Council of Texas, or ERCOT – projects lower demand or higher supply of power on the grid than there is. If ERCOT plans on a certain amount of load to come from wind turbines at a certain point in time, for example, and wind doesn’t blow as expected, supply becomes overly constrained, and the price of energy goes up.

A wider reserve margin can help in these situations and in ERCOT’s case may become necessary in the future, as more wind generation comes online in its territory.

The North American Electric Reliability Corporation (NERC), the non-profit industry group that creates standards for electric utilities in the US and Canada to ensure grid reliability, recently pointed out that ERCOT’s reserve margin for this summer is well below what NERC thinks it should be: 8.5 percent versus NERC’s recommended 13.5 percent.

“Data from the NERC Regional Entities and ISOs/RTOs indicate that planning reserve margins for all regions, except ERCOT, will be adequate this summer,” a NERC report from May reads.

But ERCOT isn’t outright gambling with reliability, NERC acknowledged, and has a backup plan. If demand does cross its reserve margin, it may “call an energy alert,” which would allow it to take emergency measures like requiring some big energy consumers to reduce load (“demand response”), importing energy from neighboring regions, and asking customers to voluntarily cut back on their energy use.

The NERC report also points out that ERCOT managed to avoid such “load curtailments” while maintaining system reliability last summer, when its reserve margin was also below NERC’s “reference margin level.”

An ERCOT spokesperson declined to address questions about the reserve margin but offered a general explanation of how the operator regains balance on the grid when there are surprises.

ERCOT’s system takes a pulse of the grid every five minutes, measuring demand and selecting the most efficient resources to serve it, the spokesperson explained. Energy prices are determined based on how abundant or scarce the supply is compared to demand during each interval.

During one such cycle on July 2, the system “determined there would be insufficient capacity to meet the demand during the next five-minute interval. Prices went up during that time to reflect those tight conditions and encourage more generation to come online.”

Bruce Frandsen, senor manager of global utilities and sustainability at Equinix, said the fact that price spikes in Texas have been short indicated that ERCOT was good at bringing additional supply online quickly enough to accommodate its small reserve margins.

“We recognize ERCOT’s reserve margins are lower, and it is something we monitor,” he said. “However, up to this point in time, there have not been any outages, and the primary impact has been short-term price spikes in the real-time hourly pricing.”

Digital Realty’s Hanson pointed out another unique feature of the Texas energy market. When it was deregulated in the late nineties, the architects decided not to establish a “forward capacity market,” which is a mechanism that pays generators to ensure they have enough capacity to meet demand for years ahead.

“Lack of a capacity market is a key reason for [volatility in] that region,” Hanson said.

While volatility is a concern, however, no other energy market in the country compares to Texas in terms of liquidity, the variety of energy products, and the creativity in new products coming to market to meet customer needs, he said. For one, it’s created an environment that’s been very conducive to adding renewables to the grid (Texas produces more wind energy than any other state), and that’s benefitted Digital and other operators there who want clean energy for their data centers.

ERCOT’s grid-management strategy held last summer, when temperatures in Texas hit record highs. The strategy is being tested again this summer and next. “We’ll see how well we do,” Hanson said.

If the strategy continues to hold, other states seeking to bring more renewables online will have more reason to take a page out of Texas’s playbook.