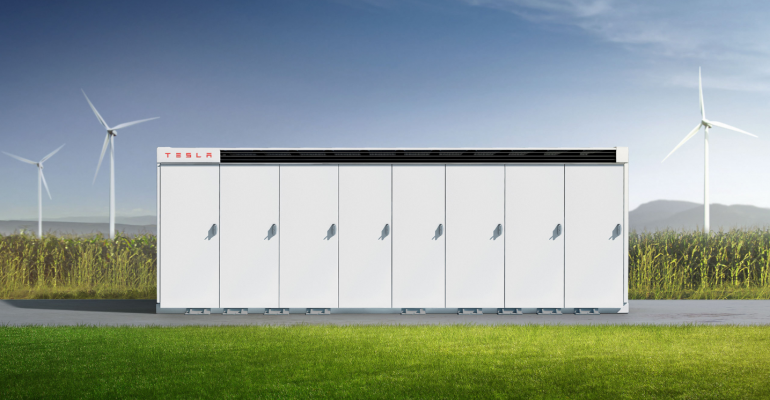 The Megapack utility-scale energy storage system will help customers of three solar farms ride through when there isn't enough sunshine.

Three massive solar energy generation projects underway in Nevada that will power data centers by Switch, among other things, will rely on Tesla’s new utility-scale energy storage technology to ride through periods when the sun isn’t shining.

Las Vegas-based Switch has made a 25-year purchase agreement for solar and battery power from Capital Dynamics, which will own the overall project, said Adam Kramer, executive VP of strategy for Switch.

Renewable energy has been gaining in importance as a factor in companies' data center sourcing decisions. With their own corporate sustainability goals to meet, many enterprises are more likely today to choose data center providers that can give them computing infrastructure powered by renewables.

Energy storage to address the intermittency of wind and solar, renewable energy’s Achilles heel, had for a long time been cost-prohibitive. But the cost of solar-plus-storage combination has gone down enough in recent years (due in large part to the falling cost of lithium-ion batteries) to make it competitive with fossil energy.

The three projects in Nevada financed by Zug, Switzerland-based Capital Dynamics will begin coming online in 2022 and are scheduled to be completed by 2023, Kramer said. Switch has been using power available from the local grid for its data centers, and only a portion of that power is renewable, he said.

Capital Dynamics and Switch said in 2018 that they intended to create solar power projects in Nevada. That started with the Townsite solar project, which Capital Dynamics purchased in August 2019 for an undisclosed price.

Located in Boulder City, Nevada, Townsite originally was expected to produce 180MWac/231MWdc, and the companies said last year that it was planned to also feature a 90MWac/360MWh energy storage facility. Now Townsite is planned to produce 240MW, with 240MWh of battery storage.

At the time it was purchased, it was expected to be fully constructed by the end of 2021. The project was expected to create 300 jobs with a peak demand of 400 jobs during a 12-month construction period and 10 full time onsite and offsite employees.

The other new solar project is in Clark County (which includes Las Vegas) and consists of 188MW of solar and 200MWh of battery storage, the company said.

The third project, Citadel, will produce 127MW of solar power and have 240MWh of battery storage, is located in Storey County. That’s one county over from Reno and is also home to the Tesla Gigafactory battery manufacturing plant, where Megapack batteries that will store energy for the projects will be made.

Altogether, the three projects are expected to create 1,000 jobs, 555MW of solar power, and 800MWh of battery storage.

The energy will be stored by Tesla’s Megapack battery systems, which the company announced a year ago. Each Megapack comes with up to 3MWh of storage and 1.5MW of inverter capacity, according to Tesla, allowing for a total of 250MW, 1GWh in a three-acre space, the company said.

The Megapack consists of freestanding modules designed to be outside, near the solar farms, Kramer said. “By utilizing the energy storage as part of our solar strategy, it allows us to have more control of our energy rates long-term,” he said. That also helps the company keep its costs low, he said.

The solar power panels are being constructed by First Solar, which is based in Tempe, Arizona. Switch emphasized that First Solar was an American company.

Switch’s Las Vegas data center campus consists of 12 buildings, Kramer said. The Reno one is just a single building, but it is 1.3 million square feet, which he claimed made it the single largest data center in the world.

While the Storey County project is located in an Opportunity Zone, Switch is not taking advantage of the tax break, Kramer said.

Altogether, Switch has four campus locations in the US, the other two being in Grand Rapids, Michigan, and in Atlanta. The Michigan facility uses wind energy, Kramer added.