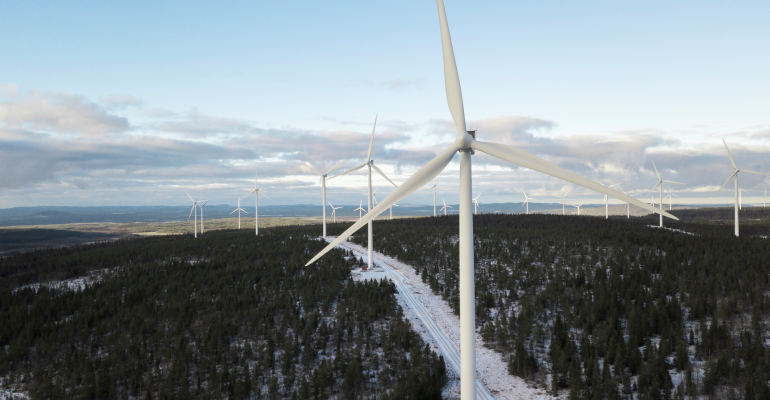 The Tech Behind Microsoft’s Sustainable Data Center Plan in Sweden

The company has co-developed a demand-supply matching platform with its energy supplier in Sweden.

Microsoft plans to open new sustainable data centers in Sweden next year to meet increasing demand for cloud services in the country. It will be the first deployment of a system that uses Azure IoT technology that monitors energy consumption to match it with renewable energy from its power company Vattenfall on an hourly basis, ensuring that its data centers use 100 percent renewable energy, the company said.

The cloud giant announced its plans to build the new data center region in late November. A cloud availability region is a geographically dispersed set of data centers, which in this case will be built in the cities of Gävle, Sandviken, and Staffanstorp. The new facilities will provide access to Azure, Microsoft 365, Dynamics 365, and Power Platform service in Sweden.

Powering data centers with renewable energy directly and around the clock is a complex puzzle some of the largest operators have been working hard to solve in recent years. Renewable energy at utility scale is often produced far from where data centers are built; that, combined with its intermittency, has pushed data center operators (and most other large energy users looking to go green) toward schemes that appear to balance out dirty energy consumed in one place with clean energy produced elsewhere but don’t actually reduce the amount of carbon emitted to power their facilities.

“These investments will enhance our ability to support our customers’ digital transformation and bring the benefits of customer data residency in Sweden,” Brian Janous, Microsoft’s general manager of energy and sustainability, said in an interview with DCK.

The company is not disclosing the cost of building the data centers, but Janous said this type of facilities typically involves capital investments in the hundreds of millions of dollars.

In recent years, hyperscalers and major data center providers have increased their efforts to source renewable energy for their facilities because they want to operate more sustainably and because many of their customers demand it.

Earlier this year, Microsoft announced plans to switch to a 100 percent renewable energy supply for all its data centers, buildings, and campuses by 2025. It also plans to become carbon negative by 2030 and remove the equivalent of all its past carbon emissions by 2050.

In Sweden, Microsoft will make sure the new cloud region is powered completely by renewable energy through its use of the Vattenfall 24/7 Matching solution, which the two companies co-developed and which uses Microsoft Azure IoT Central technology.

The solution matches renewable energy generated by Vattenfall, such as wind and hydro power, with the amount of energy its customers – in this case, Microsoft – consume on an hourly basis.

“Microsoft data centers are powered by renewable energy, using the electricity grid as an intermediary. The Azure-based 24x7 Matching solution ensures that there is direct and exact matching between the amount of renewable energy supplied and the consumption of the customer,” Janous said.

For auditing and reporting purposes, the solution records all matches to ensure that any unit of renewable energy is only sold or matched once, according to him.

Data center operators in Europe buy Guarantees of Origin (GOs), which are electronic documents that prove that the energy they consume comes from renewable sources. Historically, the industry has used GOs to match energy consumption with renewable energy production over a one-year period, according to Vattenfall, so the ability by the Vattenfall 24/7 Matching solution to perform the matching on an hourly basis is a huge improvement.

The technology allows Vattenfall to more precisely understand its customers’ renewable energy demands, while allowing Microsoft and other Vattenfall customers to validate energy consumed every hour is renewable.

Microsoft and Vattenfall initially piloted the hourly matching technology at their respective Swedish headquarters in 2019.

Azure IoT Central, a hosted IoT application platform that allows for the easy and secure management of a large number of IoT devices, helps enable the matching, Janous said. When the Microsoft data center region in Sweden is built, Vattenfall will ingest data from its renewable energy portfolio and from Microsoft’s data center equipment.

That will allow the utility to match in real-time specific units of renewable energy generation with Microsoft’s usage – and dispatch energy from storage if there’s a shortfall – to ensure Microsoft is continually supplied with renewable energy, Janous said.

As part of Microsoft’s data center investment in Sweden, the company announced it is investing in $1.25 million (U.S.) dollars to support STEM programs in the country. Its goal is to provide digital skills training for up to 150,000 Swedish citizens, the company said.