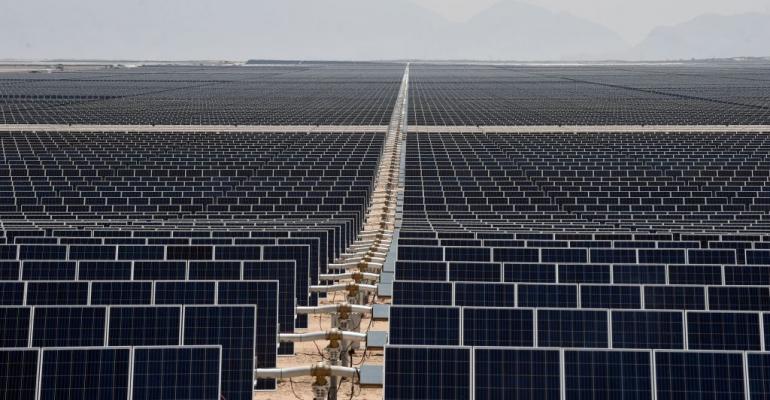 ALFREDO ESTRELLA/AFP via Getty Images
The Villanueva photovoltaic power plant operated by the Italian company Enel Green Power in the desert near Villanueva, a town in the municipality of Viesca, Coahuila State, Mexico.
Energy

Renewable energy for data centers is harder in the US than in Europe. Here’s how one French ad tech firm solved the puzzle.

Advertising technology company Criteo has long focused on being green and sustainable. So last year, when Digital Realty offered to power Criteo’s US data center operations with solar energy, the company jumped at the chance.

Its advertising platform enables businesses like retailers to serve personalized display ads in browser windows and mobile apps. The Paris-based company makes $2.26 billion in annual revenue and relies on a globally distributed multi-data center infrastructure to meet the needs of its 20,000 customers worldwide.

Criteo doesn’t have a formal global environmental policy in place, but it does have a goal to power its data centers with 100 percent renewable energy, Matthieu Blumberg, Criteo’s VP of engineering infrastructure, told us. According to him, 84 percent of Criteo’s data center energy consumption is currently being offset by Renewable Energy Certificates – up from 75 percent in 2018.

“Criteo is conscious of its environmental footprint and aims to minimize it,” Blumberg said. “Our infrastructure team has always had sustainability and carbon footprint in mind.”

In recent years, Digital Realty and other major data center providers have stepped up efforts to source renewable energy for their facilities, responding to growing customer demand. Their clients, from the largest hyperscalers to smaller enterprises, are increasingly trying to operate sustainably.

Those client-side efforts have accelerated this year, with announcements like Microsoft’s commitment in January to become not only carbon neutral but “carbon negative” by 2030, or Amazon’s formation earlier this month of a $2 billion venture fund for clean energy innovation. There’s growing pressure to clean up operations from investors too.

The announcement could push more chief executives across the globe toward greater sustainability. Fink wrote in his letter that each company’s prospect for growth is tied to its ability to operate sustainably – including sustainability of its supply chain.

As customers increasingly focus on sustainability, data center providers can differentiate themselves by lowering their Power Usage Effectiveness and procuring renewable energy, such as wind, solar, and hydro, to offset their carbon usage, said Todd Traver, VP of IT optimization and strategy at the Uptime Institute.

“Data center operators want to do the right thing for the planet, but they also know there is customer demand for it,” Traver said. “In many cases, it’s driven bottom up by the customers. It’s much like buying a car. Customers don’t want to buy a gas guzzler when they can buy an energy-efficient hybrid or electric car.”

The San Francisco-based company has a broad sustainability strategy that includes building energy efficient data centers that are LEED and Energy Star certified and powering them with wind, solar, and hydro facilities, he said.

Since 2016, Digital has procured enough wind power to power its US retail colocation business. It has also sourced enough renewable energy to offset the carbon footprint of its European data centers. Overall, by the end of 2019, the company had 324MW of new solar and wind power under contract, Binkley said.

Criteo’s home country France is a leader in environmentally sustainability, and its government works with the private sector to fight climate change. The company has long advocated for sustainable operations.

It focuses on running the most efficient IT infrastructure possible and works with its vendors to improve sustainability – down to details like asking server manufacturers to stop shipping unnecessary parts, such as front panels, user guides on DVD, and power cables, Blumberg said.

While renewable energy is common in European data centers, Criteo discovered in 2014 that it wasn’t so in the US.

Renewable energy is cheap in Europe, because nuclear power is native and considered “non-carbonated,” he said. But in other regions, including the US, where renewable energy is purchased through a data center provider or through a Renewable Energy Certificate, the energy’s total cost of ownership is usually higher than traditional fossil-based energy, according to Blumberg.

Criteo’s engineers, however, try to offset the additional cost of each 1kWh through smarter infrastructure design or code refactoring, he said. By optimizing hardware configurations, the company gains three to four times performance within the same power envelope.

“In the end, we are making an impact with less, which we’re proud of,” he said.

In 2014, when the company needed to refactor its infrastructure, it decided to simultaneously invest in renewable energy in the US and move its US data center from New York to Northern Virginia.

Criteo invited about 10 data center providers to participate in a Request for Proposals. But it soon realized only a few providers offered renewable energy, so it narrowed the discussion to those providers, Blumberg said.

The RFP included questions about energy saving processes, energy sourcing, PUE, and other eco-related topics, he said. In the end, the company chose Digital Realty, partially because of the provider’s sustainability strategy.

“Even though this is not the most decisive criteria in our data center qualification process (with hundreds of questions and a site survey), this brought some ‘brownie points’ to Digital Realty in the final scorecard,” Blumberg said.

Criteo inked a deal for a 1MW setup in Digital Realty’s data center facilities in Ashburn, Virginia, and in 2016, the company moved its data center operations from New York.

Later, in 2018, Digital Realty announced that it would begin sourcing power from a nearby solar farm, newly built by SunEnergy1. When the energy output from the solar farm became available in early 2019, Criteo became an early adopter.

“For Criteo, we were able to match their load with renewable energy,” Digital’s Binkley said. “What’s nice is the solar farm is in the same utility territory, so we have geographical alignment with our data centers.”

Criteo’s data center equipment is not directly powered by the solar energy from the nearby solar farm. But it means Digital Realty is ensuring that there’s an amount of renewable energy being generated that’s equivalent to Criteo’s consumption.

“The whole process aims at having a zero balance sheet where carbon footprint is compensated,” he said.