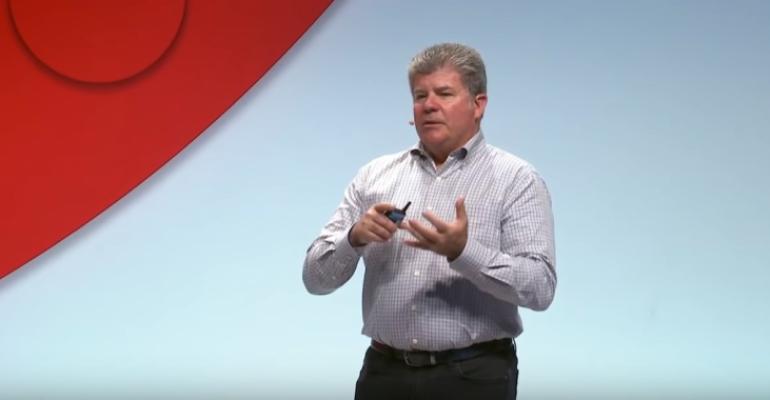 Google Says It ‘Can Do Better’ in Renewables for Data Centers, Offices

In 2017, Google marked the first year it bought enough renewable energy to match the energy consumption of all its data centers and offices around the world. While that was a huge step toward sustainability by a global corporate giant, it didn’t mean that Google operations ran on 100 percent renewable energy that year – far from it.

Renewables aren’t available in every place Google has an office building or a data center. Ideally, every local utility grid a Google facility is plugged into would be fed by solar installations or wind farms, piping clean energy to the building, but that isn’t the case everywhere. In places where it is the case, the facilities are still powered by utility grids fed by a variety of sources, including coal and natural gas plants, relying on the full generation mix to keep running when the wind doesn’t blow or the sun doesn’t shine.

Today, the company simply adds up the amount of energy consumed by its operations globally and the amount of renewable energy it’s purchased in regions where it’s most available, such as central US and Northern Europe. As long as the two totals are equal, it can say it’s matched its consumption with renewables.

Recognizing that buying the output of a 5MW wind farm in country A does little to reduce the carbon emissions from a coal plant powering a 5MW data center in country B, the company back in 2016 said in a whitepaper that it would work toward matching all its operations with locally produced renewables.

Receiving an award for sustainability last week in Europe, Google’s VP of data centers Joe Kava restated that goal. “While in 2017 we matched 100 percent of our data center consumption and Google enterprise consumption with renewable energy, we can do better, and our new commitment is to match hour for hour, 24 hours a day, seven days a week with renewable energy,” he said from stage after receiving the award from the data center industry group Infrastructure Masons.

“That’s really almost impossible today,” he continued. “There’s new technology that has to be developed to enable this, but I think that we can do it, and we’ll be demonstrating and showing the industry how we can do this and leading the way so that others can follow suit.”

Technology is only one of the obstacles. In the 2016 paper, Google outlined three challenges it would focus on to get there, technology being one of them.

The main technological challenge to solve is the intermittency of wind and solar generation. “To this end, in complement to our wind and solar purchasing, in the future we may pursue dispatchable, zero-carbon generation energy options for our portfolio,” the paper’s authors wrote.

Among others, those options could be:

Some of these technologies are either not mature enough or aren’t cost-effective at Google’s scale, but the company hopes innovation, economies of scale, and public policy “will speed the pace of adoption and bring the costs down over time.”

Another challenge Google is focusing on is availability of renewable generation on the local grids where it has operations. That’s not only a matter of funding new solar or wind farm construction; there are still many markets where local utility business models and regulations simply don’t have a mechanism to allow customers to buy renewable energy.

The answer there has been to spend countless hours lobbying and negotiating with those utilities and regulators to create such mechanisms. Google has successfully achieved this in places like North Carolina, Georgia, and Taiwan.

This is connected to the third area of focus Google outlined in the paper, and it has to do with pushing governments to design policies that can accelerate the transition to a renewable energy supply.

Those could include taxing carbon emissions (or “mechanisms that ‘internalize the externality’ of GHG emissions,” as the authors put it), increasing direct government investment in energy R&D, financial incentives for deployment of renewable projects, investment in energy infrastructure, and deregulating energy markets to make renewables easier to buy.