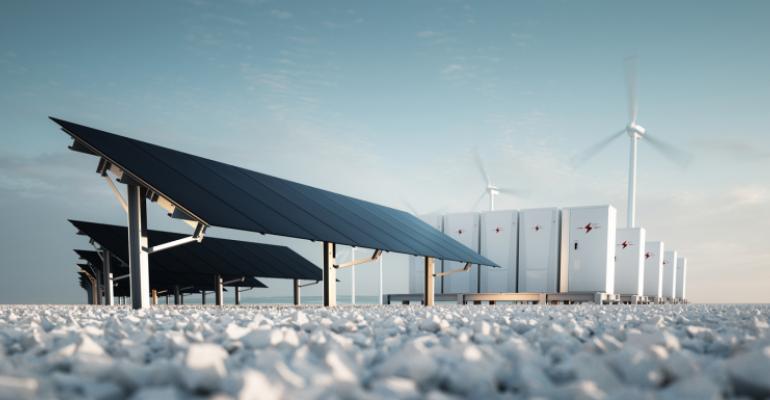 Billionaire Gautam Adani wants his conglomerate to be a world leader in green data storage, with data centers run entirely on clean power.

(Bloomberg) -- Billionaire Gautam Adani wants his conglomerate to be a world leader in green data storage, with data centers run entirely on clean power playing a key part in his ambition to recast an empire built largely on coal mining and trading into a renewable energy giant.

“It is inevitable that massive data center infrastructure will become the largest energy-consuming industry to ever exist,” Adani, chairman of Adani Group and Asia’s second-richest person, said at the Bloomberg India Economic Forum on Thursday. As India exponentially expands its clean energy capacity at one of the lowest costs, it “will make us the greenest choice to warehouse not just India’s but perhaps much of the world’s data.”

The conglomerate has committed to invest a total $70 billion by 2030 across its green energy value chain to become the world’s largest renewable energy producer. It is one of the two biggest tailwinds behind Prime Minister Narendra Modi, who made a surprise pledge at COP26 for India to touch net-zero carbon emissions by 2070. Reliance Industries Ltd., helmed by Asia’s richest man Mukesh Ambani, plans to spend $10 billion on renewables over the next three years.

Adani will face multiple challenges in powering data centers as they require 24X7 power supply, according to Shantanu Jaiswal, BloombergNEF’s head of India research. “Adani must invest in storage of renewable energy or find other sources to ensure uninterrupted power supply when the sun isn’t shining or the wind breeze is weak,” Jaiswal said.

Notwithstanding the hurdles, the 59-year-old billionaire sees a booming demand for data centers as ultra-speedy 5G services, quantum computing and cloud storage applications expand. Digital transactions also got a massive boost during the Covid-19 pandemic that forced people to work, study and shop from home. India is becoming a hot market for providing data storage services to global firms such as Amazon.com Inc. and Alphabet Inc.’s Google amid rapid surge in smartphone usage and cheap mobile data tariffs.

“The Adani Group is well positioned to benefit from this trend given our ability to build data centers, connect data centers, and provide 100% green power to data centers – a provision that will be hard to replicate at an economic scale elsewhere in the world,” the tycoon said.

The Adani conglomerate is rapidly ramping up its solar energy portfolio and its ports business aims to be carbon neutral by 2025. Adani firms have raised almost $1.1 billion in green and sustainability-linked dollar bonds in 2021, and another $1.35 billion in offshore loans -- making them the biggest issuers of ESG debt from India, data compiled by Bloomberg show.

“We are doing all we can to make renewables a viable, affordable alternative to fossil fuels,” said Adani, a first-generation entrepreneur who started off as a diamond trader in Mumbai in the 1980s, then helped run his brother’s plastics business in his home state of Gujarat before setting up Adani Enterprises Ltd. -- the group’s flagship company -- as an agri-commodities trader in 1988.

In the past two decades, the group has rapidly diversified into ports, power generation and distribution, airports, data centers and digital services. The tycoon has added $52 billion to his net worth this year -- one of the biggest gainers in 2021 -- pushing his wealth to almost $86 billion, according to the Bloomberg Billionaires Index.

Adani’s sustainability claims, however, are criticized by climate campaigners who point to the group’s Carmichael coal mining project in Australia, which will expand supplies of the highly-polluting fossil fuel. The Adani Group opted to self-fund after having trouble in securing external funding and is targeting the first shipment by the end of this year.

Adani also spoke about his group being well positioned to produce the world’s cheapest green hydrogen, calling it “a miracle fuel and a miracle feedstock” which can disrupt many industries such as the chemicals and metals sectors. Ambani’s Reliance too is aiming for green hydrogen at $1 per kilogram by the turn of this decade -- a price that could threaten fossil fuels.

“Indian billionaires understand the importance of green hydrogen for deep decarbonization of the economy,” said Rohit Gadre, an analyst at BloombergNEF, adding that Adani will face intense competition from home-grown as well as global rivals in its pursuit of pole position as the world’s top renewable power producer.

The Adani group has been adding muscle to its renewable portfolio. In May 2021, it paid $3.5 billion to buy SoftBank Group Corp.’s local clean energy unit as it gets closer to its goal of having 25 gigawatts of renewable power capacity by 2025 up from an installed capacity of 5.4 gigawatts currently.

The conglomerate “has had an early start and our portfolio includes increasingly green ports, green airports, green power, and green transmission,” Adani said. “No other company has yet made so large a bet on developing its sustainability infrastructure.”