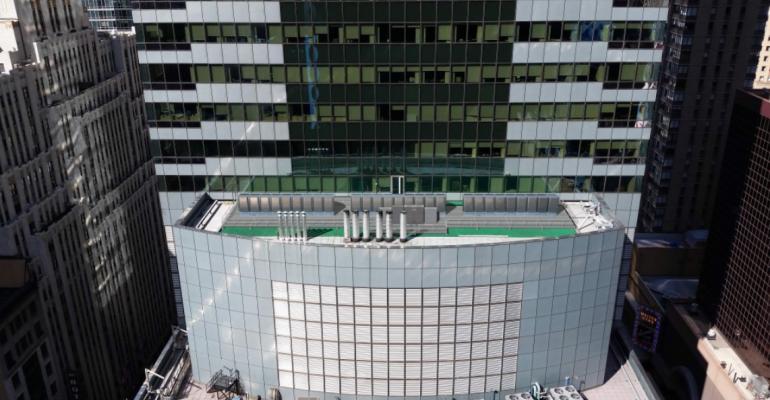 The city’s new restrictions make Bloom’s prospects in one of the hottest markets uncertain.

Bloom Energy is suing the City of Santa Clara, alleging that a new limit on the types of fuels that can be used to power on-site generation plants will increase greenhouse gas emissions instead of lowering them.

Speaking with Data Center Knowledge, a Bloom spokesman also suggested that the city was abusing its regulatory power to muscle out a competitor to the city-owned utility Silicon Valley Power. SVP and city officials said earlier that their motivations were not at all business-oriented, and that the point of the rule was “to align with the City’s sustainability commitment and advance the City’s local climate action plan goals.”

The new rule at the center of the conflict prohibits SVP customers from using on-site generation plants powered by non-renewable fuels, such as natural gas. (The rule does not affect existing plants.) Bloom manufactures fuel-cell systems that can be powered by natural gas or biogas but says the latter option makes little business sense in Santa Clara, where biogas, a renewable fuel, is not readily available and hence prohibitively expensive.

SVP and San Jose, California-based Bloom, which went public last July, compete for customers in a city where most of the energy demand comes from data centers. Silicon Valley is one of the biggest and most sought-after data center markets in the US. Santa Clara is at the heart of the market, which is projected to add hundreds of megawatts of new data center capacity in the coming years. SVP’s new rule effectively bars Bloom from that enormous business opportunity.

2018 was the first year in about a decade in which SVP’s load did not grow as quickly as expected and its sales were down, Manuel Pineda, Santa Clara’s interim chief electric utility officer, told the City Council earlier this year. “Fuel-cell installations are part of that,” he said in a Council meeting that took place not long before the new regulations were proposed. Fuel cells currently represent 1 percent of the power load in SVP’s territory, according to him, but their portion is expected to soon exceed 3 percent.

Other reasons SVP’s revenue growth has slowed include data center operators building more efficient facilities or upgrading existing ones, Pineda said. “So it’s good but also means less sales from our end. Obviously, if we’re selling less power, our budgets are affected, and part of that is the contribution in lieu to the General Fund,” he said, referring to the amount of money the utility would be able to contribute to the city budget.

In the same presentation, Pineda pointed to the new data center capacity expected to come online in Santa Clara in the coming years, which he said could lead to anywhere from 40 percent to 80 percent more revenue for SVP.

Bloom points to Pineda’s statements as an illustration that the utility’s new rules, adopted in May, might have been motivated by more than just climate change. The rules were proposed “just a few weeks” after the City Council meeting “where they said they’re losing money, losing customers to Bloom,” David McCulloch, Bloom’s VP of corporate communications, told us.

The company doesn’t mention its competition with SVP and the suspicion that the new restrictions may not have been imposed in good faith in the lawsuit it filed with the Santa Clara County Superior Court Wednesday. Instead, the petition asks the court to block the rule because the city did not complete a state-mandated environmental impact study before enacting it.

Reached by phone Thursday, Lenka Wright, director of communications for the City of Santa Clara, declined to comment. “At this time, we are not commenting on the lawsuit,” she said.

The city, Bloom argues, should have completed an Environmental Impact Report required by the California Environmental Quality Act before imposing the restriction. City officials claim the resolution to adopt the rules qualified for an exemption in the CEQA guidelines, but Bloom says the city did not meet the exemption’s requirements.

Citing a report by the consulting engineering firm Ramboll Group, Bloom says limiting the use of natural gas to fuel its energy servers will increase greenhouse gas emissions because it will increase reliance on three natural gas-powered generation plants SVP owns and operates in California as part of its generation mix.

Several experts from business and academia have come out in Bloom’s support. They include among others Raouf Abdel, executive VP of global operations at Equinix, the world’s largest data center provider and a Bloom customer; James Sweeney, professor of management science and engineering at Stanford University; Jack Brouwer, a mechanical and aerospace engineering professor at UC Irvine and director of the university’s National Fuel Cell Research Center; and Catherine Sandoval, associate professor of law at Santa Clara University (also a Bloom customer). Silicon Valley Leadership Group, an industry group founded by Hewlett Packard co-founder David Packard, has also voiced support for Bloom.

In a letter addressed to Santa Clara Mayor Lisa Gillmor, Equinix’s Abdel argued that not only was Bloom’s solution sustainable but it also compensated for relatively poor reliability of the utility grid. “Unfortunately, the aging grid and the increasing severity of natural disasters mean that traditional forms of centralized power and delivery do not provide sufficient reliability or power quality for our needs,” he wrote.

In their responses to Bloom and its supporters, Santa Clara officials have maintained that the new regulations don’t preclude anyone from installing Bloom fuel cells – as long as they’re fueled by biogas or, alternatively, as long as they’re disconnected from the utility grid. But neither of those options is realistic, Bloom has argued.

The Problem with Biogas Is…

Biogas has played a big role in Bloom’s marketing over the years, helping the company tell a green story about its technology. But the fuel is available in few places today, and there isn’t a well-developed infrastructure for delivering it to customer locations, so that story has been of a more aspirational nature, talking about the future potential of biogas.

The current reality is that there’s simply no cost-effective way to get biogas to where it could be used to generate baseload power not only in Santa Clara but in the entire state. “If you wanted to run your systems on [biogas], it’s going to cost in the region of three to five times more” than natural gas, McCulloch said.

There are two ways of procuring biogas for energy generation, he explained. One is to connect the generation plant directly to a biogas source, such as a landfill, a wastewater treatment plant, or a dairy farm.

The other is to buy biogas where it’s available and the source already connected to a local pipeline, push that gas into the pipeline, while applying the renewable credit to natural gas used by the customer – a system similar to renewable energy credits used by solar and wind farm customers.

“We do have customers doing that,” including Apple and Ikea, McCulloch said. “These are companies that have chosen to prioritize their environmental footprint over cost. For most organizations, that’s not economically viable.”

Disconnect from the Grid?

The other option for complying with the new regulations – running fuel cells on natural gas without connecting them to the utility grid – takes away much of the value in using the Bloom solution. The solution is designed to serve as the primary energy source for a building with the utility grid as the backup. If, in other words, the supply of gas is cut off for some reason or the Energy Server malfunctions, the grid takes over to ensure the building stays powered.

That scheme is attractive to customers, especially customers like data center operators, because they can forego the expense of installing and managing backup generators and the associated power failover infrastructure. These savings are a big part of the calculation when customers decide whether to deploy Bloom’s fuel cells.