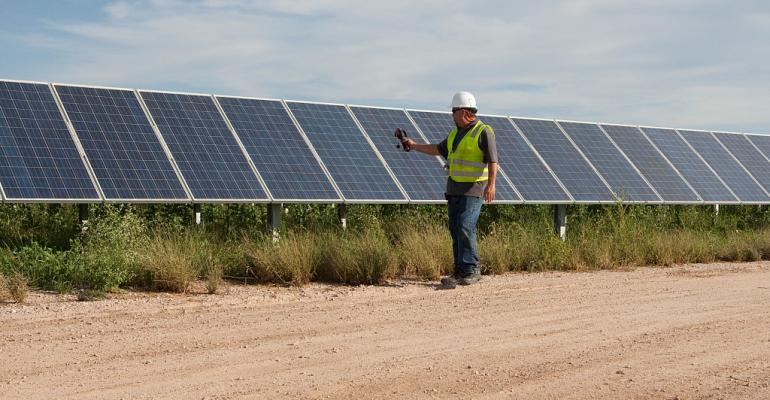 The giant’s latest solar energy buy in Texas is expected to bring it to 70 percent renewable in the Dallas-Fort Worth market.

Digital Realty will soon be buying enough renewable energy in Texas to cover for most of the energy consumed by its extensive data center footprint in the state.

The company last week announced new investments in Dallas: an agreement to purchase solar energy to help power its data centers in the region as well as plans to expand colocation capacity.

Digital said it will buy about 160,000MWh of solar energy per year from Pattern Energy’s new Phoenix Solar Project in Fannin County. The 12-year power purchase agreement comes on the heels of an announcement it made in April of a deal to buy 262,800MWh of renewable energy annually from a new wind generation project being developed in Texas by Bearkat Wind Energy II.

Both projects are expected to come online in the middle of 2021. When they do, Digital will have gone from buying enough renewable energy to cover for more than 20 percent of its data center energy consumption in the Dallas-Fort Worth market to 70 percent, Aaron Binkley, Digital Realty’s senior director of sustainability, told Data Center Knowledge.

The company operates 13 data centers in the Dallas area. It also announced on Monday plans to increase colocation capacity in its downtown data center at 2323 Bryan Street, a major regional interconnection hub.

“We look to add renewables where we are growing most rapidly and most robustly, and we have a sizeable footprint in the Dallas area, and that footprint is growing, including colocation and our hyperscale offerings,” Binkley said.

In recent years, Digital and other major data center providers have increased their efforts to source renewable energy for their facilities because of growing demand from customers who want to operate more sustainably.

The Dallas-Fort Worth Data Center Market

Many of Digital Realty’s customers in the Dallas-Fort Worth data center market want renewable energy, Binkley said. Its customers there are primarily enterprises and hyperscalers.

“Many data center operators do want low-carbon energy supplies, and they do want renewable [energy] that is available in Texas,” Binkley said. “Texas has the most liquid market in the country for renewables, so if you want wind and solar, it’s there, and it’s cost-competitive.”

Dallas-Fort Worth is one of the biggest data center markets, for a variety of reasons. The key factors are its business-friendly regulatory environment, a strong startup community, and a pipeline of skilled workers supplied by the area’s universities, a Digital spokesman said. Furthermore, major companies have committed to move to the region, such as Tesla, he said.

Another big factor is Dallas’s location, in the central part of the country, which allows cloud users with instances running on the west and east coasts to back up their workloads in the middle of the country, the spokesman said.

Renewables Around the Clock

As for the latest renewable energy agreements, the solar power generated during the day is a perfect complement to the wind power, most of which will get generated at night, Binkley said. The company expects the agreements to ensure there’s renewable energy being generated around the clock to offset the massive consumption by its data center operations.

While the wind turbines do turn throughout the day, they produce most of its energy at night, he explained.

“What we found is that (wind) covers the load well in the evenings, but not as well during the day,” Binkley said. “Solar is a perfect complement during the day. There is good alignment to match our loads more completely.”

Since 2016, Digital Realty has acquired enough wind power to offset energy consumption of its US retail colocation business. The recent agreements for solar and wind power in Texas will contribute to that. But they will also assist Digital’s efforts to meet a science-based emission reduction target, Binkley said.

In late April, the company announced that it would set a target aligned with the Science-Based Targets Initiative, a collaboration of 860-plus global companies committed to setting carbon emission reduction targets backed by climate science rather than internal self-defined parameters, Digital Realty CEO Bill Stein explained in a blog post. The organization’s standards complement Digital’s long-term goal of becoming 100 percent renewably powered, he wrote.

“We are going through a rigorous process of analysis and data validation with the Science-Based Targets Initiative,” Binkley said. “We haven’t finalized our target, but we will finalize it in the near future.”