Data Centers: A Force for Good That Is Getting Even Better

We need a conversation on not only the use of clean energy, but also other actions that drive sustainability, like energy efficiency, ethical sourcing, and a circular economy. 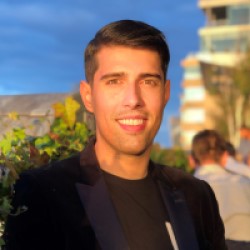 Every year on April 22, Earth Day marks the conception of the global environmental movement in 1970. Since then, the world has gotten 2ºC warmer and the need for action more urgent. While governments around the globe work on broad agreements and country- and industry-wide commitments, many of the largest organizations in the world are leading the way with concrete action to reduce climate change today. Communications service provider and broadcaster Sky kicked off its carbon-neutral program in 2006. IT equipment vendors like Apple and Microsoft are working on making popular consumer products such as the iPhone and the Xbox carbon-neutral. And the data center industry is not falling behind.

Hyperscale data center operators like Facebook and Google have made commitments to reduce their emissions and are reporting on their progress on an annual basis. For example, in its latest report, Facebook highlighted that it has halved its carbon emissions in two years, with most of the energy used in its data centers coming from renewable sources. Smaller, specialized equipment vendors and service providers like high performance computing (HPC) vendor Atos are making commitments of their own. Atos announced a partnership with HDF Energy to supply its data centers with electricity from hydrogen, which is generated emissions-free from renewable sources. The list goes on.

Despite these actions, questions about the sustainability of the data center industry remain. As Omdia was developing its 2021 research agenda, sustainability was the most highlighted topic by analysts and clients. With this report, we seek to frame the topic and provide readers with a first glance at the research perspectives Omdia will highlight this year.

Data Centers are a Force for Good

Omdia sees one data point increasingly quoted in the media, research publications, and industry events: data centers are responsible for 1% of the global electricity consumption, emit as much CO2 as the commercial airline industry, and, most importantly, are projected to continue growing. Some projections are much worse. Nature magazine, for example, estimated that when telecommunications networks are added, the production of the technology and consumer devices necessary to access the internet, the figure is closer to 10% of the global electricity consumption. So, how can digitalization and data centers be a force for good?

The American Council for an Energy-Efficient Economy (ACEEE) estimated that for every 1kw of energy consumed by the IT sector, 10kw are saved in other sectors due to the increase in economic productivity and energy efficiency. This quickly makes sense when considering the amount of infrastructure needed to run all public, social, and private services face-to-face rather than virtually. In the UK today, one can renew their driving license, passport, and bank details, buy a house, and pay their taxes virtually in a matter of minutes. This reduces the number of public buildings that need to be powered, as well as the emissions produced in traveling to these buildings. More importantly, it creates processing efficiencies and has changed the way business and society operate.

There are many ways to define sustainability, so to set the scene for Omdia’s upcoming research projects, we highlight the four main areas of focus:

Talking to industry leaders, Omdia analysts learned that the Carbon Trust’s categorization of greenhouse gas (GHG) emissions is widely accepted terminology that can provide a helpful taxonomy for understanding the four areas above. The GHG Protocol formalizes three groups or scopes that can be used across all four topics, as highlighted in Figure 1. 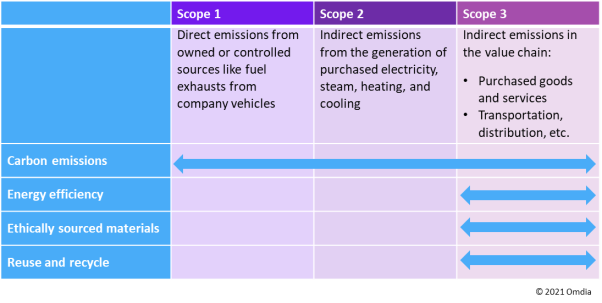 A lot of the industry discussion is focused on scope 1 and scope 2, with corporations committing to using clean energy like wind or solar power. Google, for example, has been using renewable energy to power 100% of its annual electricity consumption since 2017, making it the world’s largest corporate buyer of renewable energy. However, it does not power all of its data centers with clean energy every hour of every day. Rather, Google compensates for the times when the wind is not blowing or the sun is not shining by buying surplus renewable energy at other times.

Apart from more companies following Google’s example, it is important that data center operators and their clients focus on scope 3 sustainability efforts. A first step is monitoring and attributing business value to energy usage so that it is accounted for in business terms. The next step is changing data center operations to reduce electricity usage at both a physical and IT level by

Setting up a conflict-free supply chain is one way of increasing the focus on ethically sourced materials. Much of the metals and other materials used in processors, for example, can be referred to as conflict materials. Tantalum, tin, tungsten, and gold are often extracted in locations where militias and rebel groups abuse and kill millions of people. Intel, notably, took comprehensive steps to change its supply chain, applying extra scrutiny in vendor negotiations to ensure its processors are conflict-free. This, too, makes the industry more sustainable.

The concept of circular economy is about eliminating waste and enabling continual use of resources. There are some interesting existing initiatives to reuse and recycle data center gear/components, but there is also room for the industry to improve. A few examples of both are provided below.

Based on the partnership agreements set up by the hyperscale cloud service providers (CSPs) and their vendors, companies like Google, Microsoft, Amazon, and Facebook often have access to components like processors and memory ahead of the rest of the market. Intel’s Skylake CPUs found their way to CSPs between 6 and 12 months ahead of the average enterprise. As a result, servers decommissioned from a hyperscale data center often have either latest or recent generation CPUs in them.

Companies like ITRenew decommission and refresh the IT equipment of hyperscale CSPs and sell it, with warranty, to enterprises and smaller CSPs alike. With a minimum order quantity of just six server nodes and a growing ecosystem of software partners, this reuse and recycle effort should be a serious consideration for IT buyers, who can dramatically lower their capex. As it happens, the OCP gear in question also comes with lower opex costs.

Non-recyclable materials like single use plastics continue to be used in the data center, often as a vanity project. The servers of most OEMs, for example, continue to be shipped with a plastic bezel on the front carrying the vendor’s logo. Since access to a data center is extremely restricted, this marketing effort does little to create brand awareness and pollutes the Earth in the process. Perhaps it is time for data center IT equipment vendors to rethink this practice, in the same way as consumer brands like Apple are rethinking their packaging.

After a year when most of us have had to lead increasingly digital lives, there should be little doubt that the data center industry is a force for good. Apart from saving us time and keeping us connected with loved ones, the data center industry is helping humanity reduce its carbon footprint. However, there is a need for an industrywide conversation on not only the use of clean energy, but also other actions that drive sustainability, like energy efficiency, ethical sourcing, and the principle of a circular economy. There is also work to be done in eliminating the non-recyclable components of the data center equipment. Quick wins can be achieved by addressing non-critical plastic components like the marketing branding bezels on the front of most servers.

Over the course of 2021, Omdia will delve deeper into the topics discussed in this article and will connect the dots with other industries that indirectly or directly influence the sustainability of the cloud and data center industry.

Immersion cooling is heating up (April 2021)

An icy road for Intel amid Grace bombshell (April 2021)