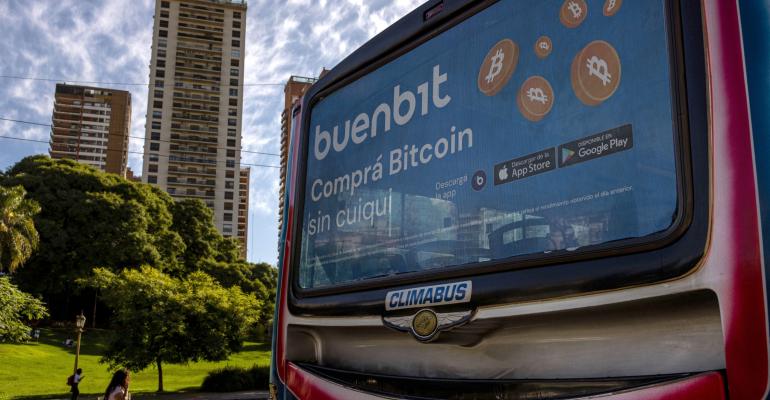 Bloomberg / Sarah Pabst
A bus with an advertisement for the Buenbit cryptocurrency exchange in Buenos Aires, Argentina.
Energy

Crypto mining is expected to consume close to a quarter of all electricity supply in the Tierra del Fuego province.

(Bloomberg) -- Argentina’s crypto frenzy is putting the energy grid of a small province in Patagonia near a breaking point as miners take advantage of generous electricity subsidies to mint Bitcoin.

Crypto mining is expected to consume close to a quarter of all electricity supply in the Tierra del Fuego province, which includes the world’s southernmost city Ushuaia, in the next few months until October, according to a report by Argentina’s state-run electricity wholesaler Cammesa.

Local officials warn that crypto mining, together with an already feeble energy infrastructure, is putting their energy grid at the risk of collapse. The province’s energy secretary, Moises Solorza, told Argentine newspaper Clarin that the province’s main cities including the capital Ushuaia “are at their limit.”

Argentina is among the world’s top 10 countries with the highest adoption of cryptocurrencies, according to specialized website Chainalysis. Buffeted by recurring currency crises and inflation running above 50% annually, two-thirds of Argentines who invest in crypto say they do so to protect their savings from diminishing purchasing power, according to a study by Buenos Aires-based Wunderman Thompson.

Related: China Deals Another Blow to Its Crypto Miners

Crypto-mining firms had flocked to Tierra del Fuego, located closer to Antarctica than the country’s capital Buenos Aires, to take advantage of cheap energy costs and a regulatory environment mostly free of red tape for the industry. They also take advantage of low temperatures that help cool the crypto-mining equipment.

Argentina’s government has subsidized energy consumption for years, at a cost of almost $11 billion just in 2021, as a political strategy to gather popular support. Yet the increasing cost to the country’s fiscal position has led the administration of President Alberto Fernandez to agree to reduce subsidies as part of Argentina’s $44 billion agreement with the International Monetary Fund.

The IMF agreement, signed last month, also calls on the government to “discourage the use of crypto-currencies with a view to preventing money laundering, informality and disintermediation.”