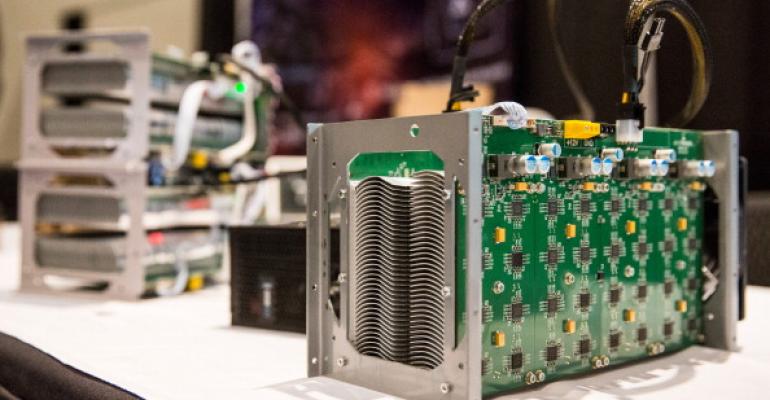 Bitcoin Could End Up Using More Power Than Electric Cars

Cryptocurrency mining could require up to 140 terawatt-hours in 2018, about 0.6 percent of the global total, according to Morgan Stanley analysts. That’s more than expected power demand from electric vehicles in 2025.

Tim Loh and Frederic Tomesco (Bloomberg) -- The global power needed to create cryptocurrencies this year could rival the entire electricity consumption of Argentina and be a growth driver for renewable energy producers from the U.S. to China.

Miners of bitcoin and other cryptocurrencies could require up to 140 terawatt-hours of electricity in 2018, about 0.6 percent of the global total, Morgan Stanley analysts led by Nicholas Ashworth wrote in a note Wednesday. That’s more than expected power demand from electric vehicles in 2025.

“If cryptocurrencies continue to appreciate we expect global mining power consumption to increase,” Ashworth wrote in the note.

While the figure is too small to be a major driver of global utility shares, it represents an important growth story for companies investing in wind and solar power combined with energy storage -- a list that includes NextEra Energy Inc., Iberdrola SA and Enel SpA, according to the note. Other potential beneficiaries include big oil companies that are investing in renewable energy and green-power developers that are backed by initial-coin-offering capital raises.

Miners will probably concentrate in low-cost power regions, including China and the U.S. Midwest and Pacific Northwest, the report said. Miners earn bitcoin-denominated rewards for performing the complex calculations needed to confirm transactions in the cryptocurrency.

One eager entrant is Hydro-Quebec, Canada’s biggest electric utility. It’s in “very advanced” talks with more than 30 cryptocurrency miners -- many of them currently operating in China -- and expects to announce agreements in 2018, Marc-Antoine Pouliot, a spokesman, said Wednesday in a phone interview.

Within four years, Hydro-Quebec envisions miners soaking up about five terawatt-hours of power annually -- equivalent to about 300,000 Quebec homes -- from the surplus created by the region’s hydroelectric dams. “If we have to invest in our transmission network, these investments will be paid for by the miners,” Pouliot said.

Not all analysts, however, expect this sort of power surge from digital currency creation. When bitcoin skyrocketed in 2017, the electricity demand for mining it climbed to about 20.5 terawatt-hours a year, according to a report published Wednesday by Bloomberg New Energy Finance. That figure would have to jump sixfold this year to reach Morgan Stanley’s estimate.

While higher prices let more companies get involved in mining, it’s impossible to know where prices are headed next, said Isabelle Edwards, an analyst at BNEF. If they stay high, energy consumption will remain high, but the electricity needed to mine a single bitcoin could fall if there are improvements in computing technology. Meanwhile, if prices fall, it’s “almost inevitable that some miners will go out of business,” Edwards said.

For its part, the Morgan Stanley report offered some caution, too.

“There are plenty of uncertainties which means energy consumption could inflect in either direction,” Ashworth said. “This is clearly not an exact science.”