EdgeConneX, which burst onto the US data center scene in 2013 and built two dozen facilities in secondary markets over the following two years, is adding a whole new dimension to “edge” in its name.

Those initial data centers were considered edge facilities because they were interconnection points where network carriers and content providers handed off traffic to local ISPs that carried it to their local end users. Since then, however, there’s been growing interest in placing computing infrastructure even closer to those end users – as close as the bases of cell towers, for example. And EdgeConneX is getting in on the action – as quickly as it did when it first surfaced.

The company has already deployed 222 of what it calls MicroEdge data centers, most of them as small as a single server cabinet, EdgeConneX CEO Randy Brouckman told Data Center Knowledge in an exclusive interview. This network of data centers for edge computing may eventually pass 1,000 locations, he said. Most are in urban office-building basements, with about a dozen located at cell-tower sites. Some are at electric-vehicle charging points.

When learning about it, EdgeConneX can often feel like the elephant in the parable about blind men, each of whom touched a different part of the animal and pictured it completely differently. So, let’s explain how all these different parts fit together to make a whole.

Brouckman said he viewed the evolution of EdgeConneX’s data center business as a series of three discrete but overlapping waves.

The first wave of edge data centers focused on caching content closer to consumers (2013-2015). Often, the 2MW modules were built with room for expansion. The company followed that initial buildout with several hyperscale builds in the US, Europe, and more recently in South America. We know that Microsoft is at least one of its hyperscale clients. According to Brouckman, the hyperscale wave was about bringing the cloud closer to the edge (2016-2017). These facilities ranged from 4MW to north of 16MW. The third wave, the MicroEdge sites, can support massively distributed low-latency applications. 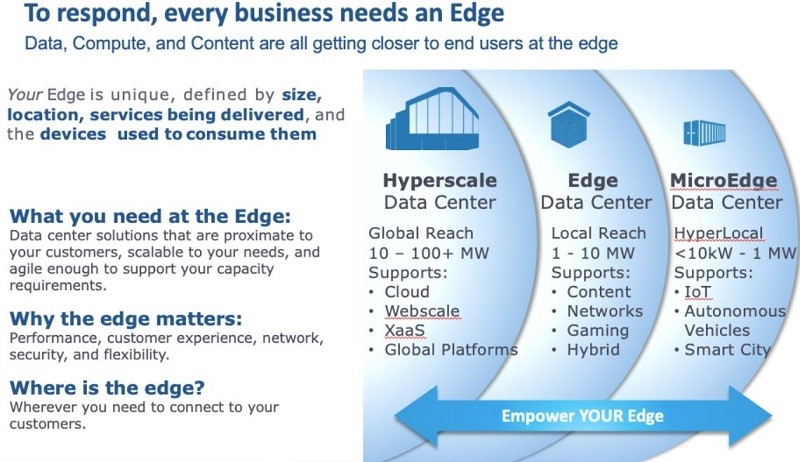 For now, a lot of the MicroEdge data centers provide edge computing support of smart buildings, but many are strategically placed to support the future generation of 5G-enabled applications – the biggest reason behind all the current excitement about edge computing.

One important distinction is that EdgeConneX does not build speculatively. Each new location is anchored by at least one customer, allowing for new data centers to launch EBITDA-positive. According to Brouckman, that rule applies to the current MicroEdge build-out. He said the micro sites don’t generate a meaningful amount of revenue for a company of EdgeConneX’s size today but declined to share the number.

Another important aspect of the nature of its investors. EdgeConneX is a portfolio company of Comcast Ventures. Other investors include Charter Communications, Akamai, Cox Communications, Ciena, and private equity firms Brown Brothers Harriman and Providence Equity Partners. While the chief exec wouldn’t say who his customers were, most of his backers are exactly the types of companies that would be interested in getting infrastructure as far out to the network edges as possible. The same can be said about its hyperscale customer (or customers). Notably, while Akamai, Ciena, and the telcos continue to be investors, Providence is now a major source of expansion capital, Brouckman said. 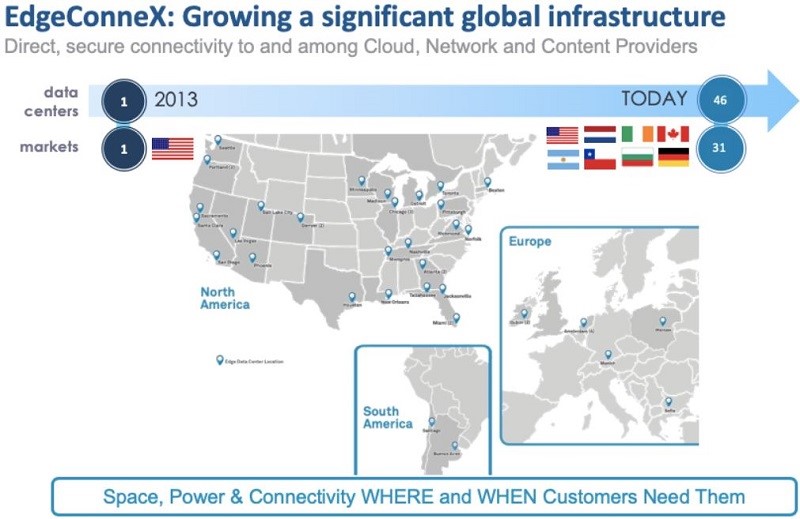 Before it got into data center development, EdgeConneX focused on fiber infrastructure and small cells serving metro areas. The future deployment of 5G wireless is expected to be a game changer, enabling future applications such as near-real-time Internet of Things analytics, autonomous vehicles, augmented reality, and others.

EdgeConneX management sees this as an opportunity to deploy MicroEdge data centers and/or "edge PoPs" in metro areas where the company has negotiated access rights to thousands of office buildings, Brouckman said. On its website the company says it manages a proprietary database of 4 million buildings, 14 million businesses, and 200,000 cell towers, which it uses to determine the most optimal locations for its edge computing sites.

Today, most MicroEdge deployments can be found in Boston, Chicago, Atlanta, Baltimore, Washington, and San Francisco metros. While they aren't yet a source of meaningful revenue, the initiative is in its early phases, and the revenue could become significant when the number of MicroEdge deployments exceeds 1,000.

Until the MicroEdge business takes off, Brouckman expects the company’s primary focus to remain on serving the needs of its wholesale content, cloud, and network customers.

Notably, he shared that EdgeConneX recently struck a deal with TierPoint, one of the largest retail colocation data center operators in secondary US markets. Enabling a customer like privately-held TierPoint to expand its footprint within an EdgeConneX data center could create a tailwind for both firms.

Because EdgeConneX is a venture and private equity-backed company, it can control both the timing and the amount of information it shares publicly. Additionally, some of its largest customers prefer that it remain private to help keep their own expansion activities under wraps. While an IPO is a possibility in the future, Brouckman's preference is to keep the company private for as long as possible.