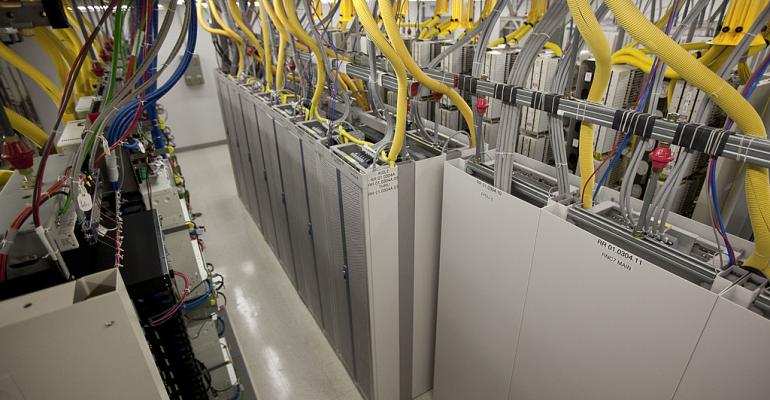 Why Google Cloud and AT&T May Merge their Telco Edges

Multiple use cases for low-latency “5G/edge” applications are being explored, powered by Anthos for Telecom.

Google Cloud recently announced a new collaboration with AT&T on “technologies and capabilities using AT&T network connectivity at the edge, including 5G.” There weren’t many specifics in the announcement, which said the two companies would be jointly developing “use cases” for applications yet to be developed that may one day utilize edge computing resources.

But whose edge were they talking about?  There’s the customer edge, for example, which is physically close to users, theoretically taking up a couple of parking spaces on customers’ corporate campuses. Then there’s the telco edge, which is the space immediately adjacent to cellular radio towers or somewhere in the neighborhood of a tower, like we’ve seen with Vapor IO’s design.

“Broadly speaking, we consider the edge to be ‘distributed,’” Aparna Sinha, a Google Cloud director of product management, explained in an email to Data Center Knowledge. “It can refer to the telecom network edge, Google edge, the customer edge, and more.”

AT&T and Google are working together on several “5G/edge solutions,” she said. “In one of these solutions, the ‘edge’ refers to AT&T’s 5G network edge. As a part of the solution, we have Google hardware deployed inside AT&T’s network edge and running AI/ML models and other software needed to deliver the 5G/edge solution.”

When Amazon Web Services announced its partnership with Verizon in December, it too said it would deploy its cloud infrastructure inside the carrier’s switching facilities to support applications that use Verizon 5G connectivity.

AT&T has also been working on edge computing solutions together with Microsoft Azure.

Google Cloud’s blog post, attributed to its CEO Thomas Kurian, made a hazy suggestion that Google could partner with many telcos worldwide — not just AT&T — “to rapidly enable a global distributed edge by lighting up thousands of edge locations that are already deployed in these telecom networks.” What exactly did he mean by “lighting up?” Are there dormant Google assets in telcos everywhere just waiting to be switched on?

“Currently Google has ‘edges’ which sit inside telecom networks — these are not in use for 5G/edge solutions,” Sinha told us. “We will start productizing and expanding these edge sites in collaboration with telecommunications companies as a part of the 5G/edge solutions we will build with them. Enabling the platform and 5G solutions at those edge locations is what is meant by ‘lighting up the edge.’”

A New Greenfield for Kubernetes?

Google Cloud is building its edge platform today under the Anthos for Telecom brand. Anthos was introduced last April as a software infrastructure so portable and inclusive that it could be deployed not just inside a customer’s own data center but also inside an AWS cluster.

Kurian’s blog post compared the relationship between Anthos and telco infrastructure to that between Android and smartphone functionality. (At the core of Anthos is Kubernetes, the Google-built open source container orchestration system.)

Sinha explained that Kurian was “referring to an Anthos platform that is staged in a telco central office or point of presence.”

Does that mean Google intends to inject containerized network functions, or CNF (an architecture that could supplant network functions virtualization) into those central offices? While Google had multiple ongoing “technical partnerships,” Sinha responded, “yes, the general direction is to support CNFs on Anthos for Telecom.”

That would go miles further than Kurian’s description of the project, which he characterized as opening the telco platform “for network-centric applications.” Enabling a rethinking of the central office using CNF could effectively merge edge and core infrastructures, while at the same time incorporating Google Cloud assets wherever they happen to be located. Conceivably, rather than using “network slices” to permanently partition virtual networks, a CNF platform could enable highly distributed applications over a variety of target deployment zones.

The possibility here is for AT&T — or for someone else using AT&T’s wireless lines and local breakout (more on this lower in the piece) — to launch a pay-as-you-go, low-latency, premium cloud service tier using Google Cloud’s services. Under a CNF scheme, it’s at least feasible that a telco could become a cloud services reseller for its enterprise customers.

But that possibility may have to wait for further stages of the 5G rollout. “Many of the solution use cases introduced here require low latency or high bandwidth,” Sinha admitted to us, “which are available as part of 5G.”

Neither Google Cloud nor AT&T have offered a rollout timetable for its jointly produced use cases.

Local Breakout and Why It Matters

A key technology that enables diversion of incoming data traffic on a wireless tower away from a telco’s own data centers and to, say, a cloud provider’s edge computing cluster is called “local breakout,” or LBO.

The broader purpose of LBO, which was introduced for 4G LTE, is to enable alternate means for handling roaming. When a roaming device enters the coverage zone of a cell tower, it can be served by whatever provider has an antenna on the tower and their network instead of having to set up a longer route that traverses the device user’s home network provider.

But LBO can also enable other services at the telco edge to handle that same roaming traffic, including cloud services. Conceivably, Google Cloud could occupy at least some of that space.

5G expands on 4G LTE’s capability to enable local break outs, which any cloud service provider would need to build a citywide edge computing network — even if it chooses deployment sites other than adjacent to cell towers.

Further development of LBO could act as a compass of sorts, pointing to the direction the telco edge market development will eventually lead. An LBO application that enables deployment of micro-data centers alongside wireless towers could open that market up to the likes of Google Cloud, AWS, and Azure. An open specification for LBO, however, could also conceivably open the doors for other players, probably including startups and even major players outside the telecommunications space — retailers, factory owners, manufacturers, maybe even farm cooperatives — to establish mini-cloud presences with minimal investment.

But if LBO should point the other direction instead — toward existing central offices (like in a recent AT&T drone sensor demonstration) — it could potentially close this market to startup competitors. Telcos like AT&T, Verizon, and T-Mobile could see Anthos as an opportunity to leverage their existing assets without building new ones, and those old assets would become the new edge.