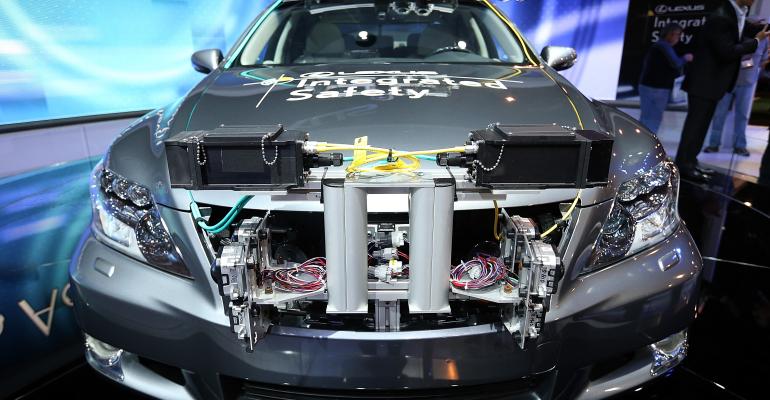 Renovo and EdgeConneX go where cars hang out the most

Data centers are getting both bigger and smaller. The economies of scale that drive hyperscale cloud are creating larger and larger facilities, while at the other end of the spectrum, increasingly smaller sites support growing demands of the data-heavy network edge.

Bandwidth costs and latency make crunching data near its source more efficient, especially in complex systems that can generate terabytes of telemetry data every few hours. This is especially true for autonomous vehicles, which have so much computing hardware, they can be called mobile data centers.

The result is terabytes of data generated every day: a single vehicle running for 14 to 16 hours a day and creating 1TB to 5TB of raw data an hour could produce up to 50TB a day and 20 petabytes a year. A fleet of 5,000 cars in a mid-size city would create over 100 exabytes of data a year.

Some of that data is processed on-board by the self-driving system, but some of it is still useful once the journey is over, Scott explained. “The car needs it to understand the world around it, so we sift through the data in real-time on the vehicle. But we also need additional analysis externally.”

Because a lot of that data is in image files from the cars’ cameras, processing it close to the source reduces the costs and delays associated with uploading to the cloud, but it doesn’t make sense to do the processing on the vehicle itself. “Doing it on the car will drain the power – and our compute is optimised for driving,” he said.

Not all the data is needed instantly. Some will need to be retained to provide historic information for mapping and routing or training data for machine learning algorithms used for preventative maintenance.

Where the Cars Sleep at Night

Working with edge data center operator EdgeConneX, Renovo has come up with a clever way to handle the bandwidth and latency problems, while expecting to find new ways to turn the vehicle data into a new source of revenue.

EdgeConneX is putting computing muscle in places cars regularly visit and stay in for long-enough stretches of time needed to transfer the data: the charging points.

It’s not unlike the way aircraft engine manufacturers download tons of engine data after each flight, while the plane is in the hangar or at the airport gate. While the car is plugged in and charging up, an Ethernet connection dumps data to local storage far faster than it could be uploaded to a cloud service.

Renovo needs a combination of centralized and de-centralized operations based on local geography and road networks. The size of each edge data center will depend on the number of vehicles it supports, and equipment can be scaled up and down as necessary.

Fleet vehicles will be charging in a fleet facility, making it the logical place to put the compute for offboard analysis. “Scale-up is the issue for automated vehicles, and this can help deliver that,” Scott said.

EdgeConneX uses a modular design for its racks and buildings, which it says it will be able to adapt for vehicle-charging facilities. It also has experience running unmanned, or lights-out, data centers, which are going to be key at the edge.

“We are comfortable operating these systems; this model isn’t inconsistent or challenging,” Marangella claims.

Renovo’s car-data analytics is a real use case for the edge: one that doesn’t depend on hypothetical 5G networks with unproven coverage and latency. In practice, autonomous cars will probably use a mix of networks to handle live information like traffic and car-to-car communications, post-drive details like billing, and the longer-term offline analysis these large data transfers can power.

With so much data needing to be processed, the cost of the edge data center could add to the already expensive vehicle costs – adding self-driving hardware to a car can cost more than $100,000 per vehicle, so Renovo is looking at how it can make money beyond simply charging for journeys.

When they plug in, these vehicles dump large amounts of data into what the two companies describe as a “data refinery” which can extract value from the data captured while driving around. To Scott, the cars are mobile sensor platforms.

“You have a lot of additional insight data [collected by the vehicles] that can create an additional data economy,” he points out. Renovo is working with other companies to find ways to use that data, perhaps for city management and street maintenance by reporting rough roads, pot holes, or broken street furniture and graffiti.

The company already has partners like Bestmile, whose software manages “robotaxi” fleets using data from the cars for live services like automated dispatching and route optimization, but also for energy and maintenance management.

Renovo and its partners are starting with a fleet of ten vehicles in the San Jose and Santa Clara area. “We’ll be understanding the robotaxi usage pattern,” Scott says, “And then we’ll look at the partner workloads at the edge to determine sizing and infrastructure.”