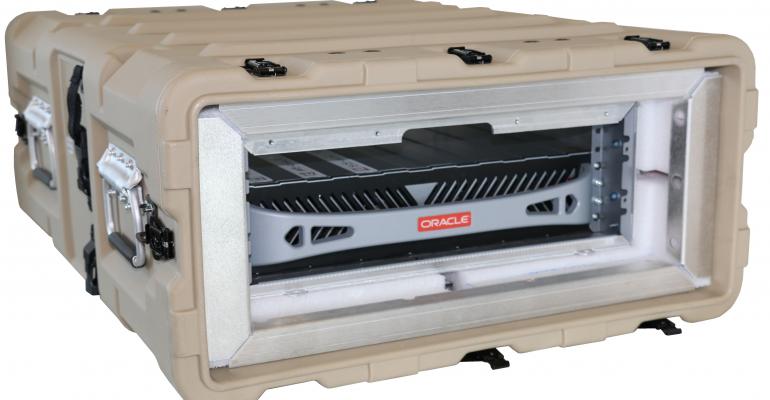 The rugged appliance is offered as a service, shipped in configurations from a single node to a cluster of 15.

Oracle has introduced a new appliance, called Oracle RED, that allows organizations to take advantage of the Oracle Cloud to build and run edge data centers in remote or rugged locations.

The Roving Edge Device allows enterprises and government agencies to take their applications and data in the Oracle Cloud Infrastructure (OCI) and securely deploy them at edge locations, such as military planes, oil tankers, or a polar observatory, the company said.

The edge devices – part of the company’s new Oracle Roving Edge Infrastructure service – are rugged, scalable, and portable servers that work even if they have intermittent internet connections or are disconnected from the internet, said Ross Brown, VP of product marketing for Oracle Cloud Infrastructure.

To order RED devices, customers can use the same interface they use for OCI and request their custom VM images and data to be loaded onto the appliances. Oracle configures the devices, ships them to the customers’ locations, and they are ready for use, Brown told DCK. Customers can also choose to pick up the devices themselves.

Use cases include machine learning workloads, query-intensive data warehouses, and ingestion and processing of IoT sensor data. “You can stand this up with a private network with sensors capturing data,” he said.

Customers can sync and upload the data to the cloud when connectivity is available. When they are done with the edge devices, they can return them to Oracle and the company will wipe them clean, he added.

Analysts say the new edge devices fill a hole in Oracle’s hybrid cloud product portfolio. The market for edge computing is still emerging and is expected to take off in future years, as data analytics and next-generation applications such as autonomous vehicles drive the need to bring computing power and storage closer to end users.

“All the different clouds are pushing toward the edge, so this is Oracle’s version of that,” said IDC analyst Gary Chen. “A lot of the other cloud providers have had various forms of this capability.”

Amazon Web Services has the AWS Snowball Snowball family of edge computing devices. Microsoft has its Azure Stack Edge portfolio, as well as three Edge Zones services, while Google has announced Anthos at the Edge. The cloud providers have also partnered with telecommunications providers on edge computing and 5G solutions.

Oracle RED devices are available to US government agencies starting today and will be available to businesses by summer, Oracle’s Brown said.

The hardware features 40 OCPUs, 1 Nvidia T4 GPU, 512GB of RAM, and 61TB of storage. Users can order a single device or group five to 15 devices into a single cluster. Cost starts at $160 per node per day, the company said.

Oracle says its hybrid cloud portfolio provides customers with more flexibility and control over their cloud deployments than the competition. Through its [email protected] offerings, Oracle installs and manages data center equipment on premises, providing customers a private version of its public cloud services through a subscription model.

Last summer, the company launched Oracle Dedicated Region [email protected], in which Oracle provides organizations a fully managed cloud region on premises. It also introduced Oracle Cloud VMware Solution, which allows customers to easily move their on-premises VMware workloads to the Oracle Cloud without having to modify them.