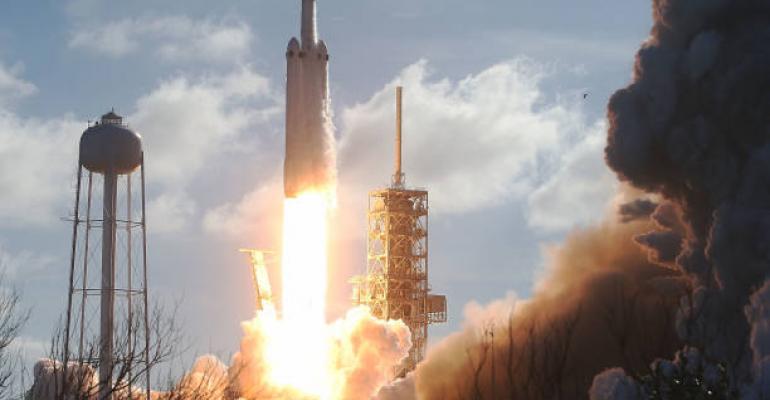 Joe Raedle/Getty Images
The SpaceX Falcon Heavy rocket lifts off from launch pad 39A at Kennedy Space Center on February 6, 2018 in Cape Canaveral, Florida. The rocket is the most powerful rocket in the world and is carrying a Tesla Roadster into orbit.
Design>Edge Computing

Critical Thinking, a weekly column on innovation in data center infrastructure. More about the column and the author here.

Microsoft created waves in the data center industry a few years back with its ambitious underwater data center initiative Project Natick. We have also covered the growing interest in so-called lights-out and self-managing data centers in previous columns. But when it comes to extreme edge of the network and lights-out computing, there is one frontier – a final frontier, if you will – that continues to stir the imagination.

Related: Uptime in Space and Under the Sea

The commercialization of space is nothing new, nor obviously is the use of satellites for telephony, internet connectivity, navigation, or broadcasting. However, the idea of a network of data centers orbiting the Earth – powered by the Sun and cooled by the icy vacuum – still seemed more science fiction that fact until very recently.

Elon Musk is not a man who seems overly concerned with orthodox thinking. This week, his company SpaceX fired yet another rocket – specifically Falcon Heavy, the most powerful rocket in operation today – right through the space exploration rulebook. To emphasize his point, the payload was a cherry-red Tesla roadster that is now headed down a trajectory that will (unlike originally planned) take it beyond the orbit distance of Mars.

Lowering the Cost of Space

SpaceX is obviously not the only launch service provider out there, and its future existence isn’t assured by any means. But if its reusable rocket technology can deliver on its promise to significantly lower the cost of putting infrastructure in space, it will drive competition and open up a whole raft of new possibilities of what can be put into orbit and cost-effectively maintained. That could include data centers one day.

Prices will still need to come down a lot though. As a fun bit of context, based on published SpaceX pricing of $90 million per 8000kgs (approx. $11,000 per kg, but SpaceX has quoted prices as low as $2000/kg), it would cost around $330 million to put a 30,000kg, 96kW, 12-rack container data center (with IT) into geosynchronous transfer orbit. That’s 12 racks for close to the same price as a large data center on earth. However, a single-rack micro data center would be more affordable at around $8 million.

Although the latest SpaceX flight was an incredible achievement, it was also an incredible publicity stunt. Where SpaceX does deserve credit, however, is challenging the boundaries of established thinking. If you combine that with the way that Alphabet, Amazon, Microsoft, and other hypers-calers have challenged the orthodoxy around facility design – from free cooling to renewables – over the last decade, then space-based data centers begin to seem less bonkers.

Elon Musk of course isn’t the only tech billionaire with space-travel ambitions. Jeff Bezos is also committed to space exploration, through Blue Origin, but has the advantage of also being firmly ensconced in the world of data centers and IT. If there is any practical mileage in the use of space-based data centers, Bezos seems well-positioned to make it happen. I’m personally looking forward to the launch of AWS’s lunar region and its Mare Tranquillitatis Availability Zone.

But while SpaceX and others may have answered the question of how to put data centers in orbit, the “why” is a bit more challenging. A number of startups focused specifically on space-based connectivity (to earth) and data storage have developed some potential business models.

These include Laser Light Communications, which recently partnered with Equinix and plans to launch a “constellation” of laser-enabled satellites. Called HALO, the satellites will circle the planet and together with terrestrial networks create a hybrid high-capacity network capable of bringing connectivity literally anywhere in the world.

Another startup, ConnectX, plans to launch a network of small low-earth orbit satellites for data storage. It’s initially targeting crypto-currency and plans to effectively store digital wallets off-planet, but its satellite network could also have other applications.

In Space, No One Can See Your Screen

ConnectX argues that some of the satellites currently in orbit are already analogous to mini-data centers, so the whole notion of space-based compute and storage isn’t that fanciful at all:

This is something that is already being done. Satellites are computers that process information, store, transmit, and receive data to and from earth. Space gives ConnectX an unfair advantage. Economically, we do not have to pay for real estate, electricity, cooling, staff or security. From a security perspective, no one can physically access our system and no government or entity can force the exposure of your information.

ConnectX even has its own plans for providing resiliency in its network that closely resembles the distributed resiliency strategies used by cloud platforms today:

Should a galactic event occur (like a solar flare) or a satellite becomes inoperable… ConnectX has intellectual property on how the system geospatially distributes and replicates information in the satellite constellation to prevent [an outage] from occurring… A secondary group of satellites flying at a higher orbital altitude will provide another data backup. These backup satellite nodes will also fly in to position to replace inoperable satellites in the main constellation.

Another space-based cloud startup is Cloud Constellation, with its SpaceBelt network of satellites for cloud storage that appears to be similar to what ConnectX is doing.

Other data center experts have also postulated that space-bound data centers could be used for non-latency dependent applications, such as cold storage, or to provide IT services in developing markets.

Of course, even putting the huge costs aside, there are still some very significant challenges when it comes to space-based data centers. These range from connectivity issues to maintenance, to protection from debris and radiation. One or more of these may prove insurmountable in the near term at least.

What is clear, however, is if a practical business case can be proved for building and operating data center capacity in orbit – whitespace in space, if you will – then it seems likely that one day there will be companies prepared to boldly go there and make it so.