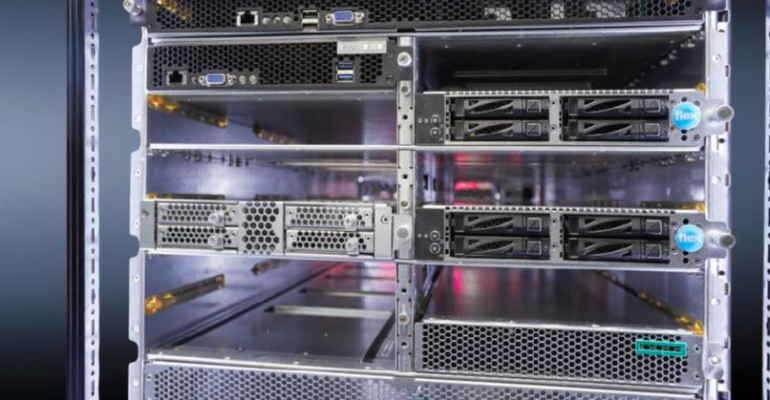 Rittal
Equipment in an Open19 cage, inside a rack by Rittal
Design>Edge Computing

As German Factories Get Smarter, Open19 May Play a Big Role

The “industrial Internet of Things” and the capabilities it’s expected to enable, such as smart factories and “digital twins” of complex physical machinery, promise more efficient manufacturing than ever achieved through automation and machine learning – the so-called fourth industrial revolution, or Industry 4.0 for short.

Because of concerns about data security, data sovereignty, confidentiality, and just the sheer amount of data industrial IoT is expected to handle, much of the computing infrastructure behind it will be deployed “at the edge,” on the factory floors, close to where the data is being generated.

Related: Open19 Says ‘19 Is the ‘Year of Adoption’ for the Data Center Standard

The Open19 Foundation, formed around data center technology developed by LinkedIn infrastructure engineers, is pushing its standard as the ideal solution for edge computing deployments. At the foundation’s recent summit, its president Yuval Bachar, principal engineer of data center architecture at LinkedIn, promised an “extreme focus on the edge” at the recent summit. “The edge is going to be the future; it’s going to be bigger than some of the cloud services,” he claimed.

This builds on the trend of replacing dedicated programmable logic controllers in factories with servers that can virtualize 30 to 40 PLCs much the same way dedicated telecoms switch gear is being replaced with servers running virtual network functions, Jason Rylands, director of data center strategy at German Edge Cloud, told Data Center Knowledge.

Long known for its industrial might, Germany has been slow to develop smart factories because data security and privacy concerns have made it generally reluctant to take advantage of public cloud services, he explained. This makes for an opportunity to provide cloud-like services in the customers’ own locations.

“Industry is the heartbeat of Germany, and they are very uncomfortable putting data into the public cloud,” Rylands said. “In our pilots most customers wanted [the technology] on premises, but they wanted to consume it like cloud, they wanted the benefits of cloud.”

These on-premises private clouds can optionally connect to “leaf” data centers housed in the offices of the Fraunhofer Institute, which are scattered around Germany in much the same way German industrial manufacturing is distributed, offering what Rylands said will be about 1 millisecond latency. They also have APIs to connect to public-cloud services like Grafana and Power BI for visualisation and trend monitoring.

The leaf nodes will enable projects like industrywide supply chain information sharing between suppliers, OEMs, and manufacturers. “With the supply chain, manufacturers want to know where every component came from and when it was made,” he said. “We have a data space where manufacturers that compete are actually sharing data across a supply chain. Track and trace, sharing data, data brokerage; that can really only be done in a private cloud network,” Rylands suggested.

But the real-time workloads stay at the edge, including image analysis to check product quality, routing robots, or real-time analytics for a fully automated production line in a factory of Rittal, German Edge Cloud’s parent company.

“We have one pilot where we’re taking constant video of PCB boards coming down the production line, and we’re able to do analytics in real-time to ascertain whether the boards have a fault and make a decision whether to reject a unit or to take some other action that needs to be done in real-time.”

Automating the delivery robots that shift pallets around the factory will use a private 5G network, which works better than Wi-Fi on a factory floor, where large metal equipment and machinery interfere with wireless signal. “A lot of the processing is done on board the robots,” Rylands explained. “You put in an order and you have a schematic and location beacons and so on, and the system runs an algorithm which says which robot is finishing and will be closest and able to pick that up.”

German Edge Cloud’s parent company Rittal is an industrial cabinet manufacturer, which gives it the necessary expertise in dealing with heat, dust, humidity, and vibration equipment faces on the factory floor. The servers in the racks are Siemens industrial systems designed for the factory environment. And the Open19 design is particularly well-suited to the constrained environment of a factory floor, Rylands explained.

“With a normal rack you need to get to the back for networking and power. The way you interact with Open19 means you don’t ever have to go to the back of the rack again after installation, so you don’t need access. It really limits you if you have to put in a rack that needs access front and back, because you need a meter at the front and between 600mm and a meter at the back. If you’ve got a door on the back of a rack, opening it could block an exit and you can’t do that in a factory; you have to have the path clear in case there’s a fire. You can open the door, slide out the server giving you trouble, and either take it away and work on it or replace it, so you’re not standing there with the door open, letting the dust and heat in.”

Front-only access and the blind-mate connections that enable it are useful in industrial edge locations, Kevin Heslin, chief editor of the Uptime Institute Intelligence report, agreed. “Of course, sometimes there are other considerations, such as plenum space for top of rack discharge,” he said. “The circumstances of the installation will dictate whether Open19 is a good fit or not.”

A recent Uptime Institute survey showed limited but growing awareness of Open19 among senior executives and manufacturers. Heslin suggested that would lead to more vendors developing for Open19, although “it is still early to tell how widely Open19 will be adopted”.

Most of the German Edge Cloud pilot projects only require a half rack with a few servers, rated around 6kW; larger edge sites might need up to ten racks. So far, the installations have used in-row cooling with either chillers or condensers, but a pilot in Rittal’s own factory will be in a 20-foot container with six racks and will use direct-to-chip liquid cooling to put a high density workload into a small footprint. Not only does that provide efficient cooling, it also allows for heat reuse.

So far, Rylands noted, the cooling-liquid temperature hasn’t been high enough for reuse. “Generally, more energy has had to go in to heat the water further,” he said. “It’s been OK for heating a swimming pool or a greenhouse – and how many of those are next to a data center? With the new liquid cooling technology, you can reuse water from a different source that’s already collected heat; you can put it through the system and pump it back out at 70 or 80 degrees. That becomes realistic to use in the factory for, say, heating offices.”