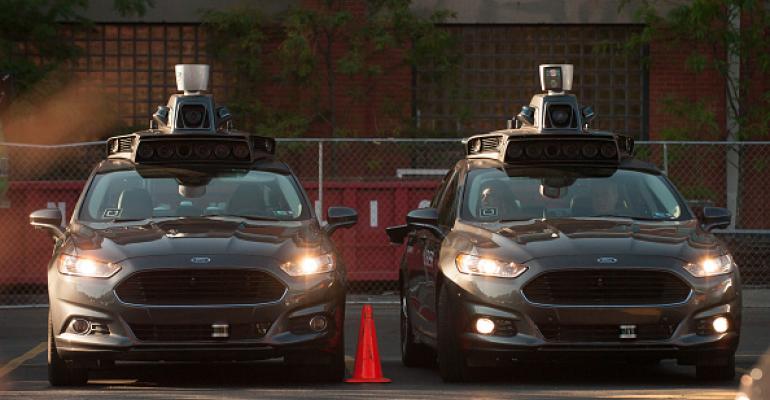 Along with virtual and augmented reality and the Internet of Things, self-driving cars have been one of tech experts’ go-to applications when explaining the utility of edge computing.

Until not too long ago, Dean Nelson, who just left his job as head of computing infrastructure at Uber, also assumed autonomous vehicles, which can generate tens of terabytes of data per day, would shuffle much of that data to and from servers in their vicinity, relying on the processing power at the edge (and ultra-fast wireless networks) to augment their onboard computing muscle.

But, after spending a few years up close and personal with the technology infrastructure that powers one of the front-running companies in the race to make driverless cars viable, he’s no longer sure edge computing will play a big role.

“In the last couple years I changed my mind with autonomous vehicles,” Nelson said Thursday while sitting on a panel at DCD>San Francisco, a data center industry conference. Earlier that day, he had announced in post on LinkedIn that he was leaving Uber to start his own consultancy and devote more time to family and the activities of Infrastructure Masons, the industry group for data center professionals he founded in 2016. (DCK reported his departure from Uber earlier this month.)

Autonomous cars are said to generate terabytes upon terabytes of data per day. According to some estimates, as much as 4 terabytes per hour.  But an operator like Uber doesn’t need to collect and keep all that data, Nelson, who’s built corporate technology infrastructure for three decades, said.

Most of it will get processed onboard the vehicle itself, and only “snippets” of data will need to be ingested by the operator’s infrastructure, he said. “It’s not terabytes of data that’s coming out of this car.”

His view is far from being universally shared. Not only is edge computing often cited by experts as a necessary co-pilot to onboard computers in driverless cars, numerous companies have invested money in the concept and started building out edge infrastructure to make it a reality.

One of them is Renovo, a Silicon Valley startup trying to commercialize an autonomous-vehicle software platform that can be used by multiple carmakers. While the platform leaves the processing necessary to make real-time driving decisions to computers onboard the vehicles, it’s designed to hoover up large volumes of data from the cars’ sensors and cameras at the edge.

The edge in Renovo’s case is at electric-vehicle charging stations, and the startup has tapped data center provider EdgeConneX (among other vendors) to help it deploy the infrastructure. When a car is at a charging point, it uploads all the driving data it’s collected to Renovo’s servers, which then analyze it on the spot, reducing the amount of data that needs to be transported to remote cloud data centers.

AT&T announced it would build a network of edge data centers for autonomous vehicles in 2017. NTT, the Japanese telco and IT services giant, made a similar announcement that year as well.

Whether a dominant architectural approach will emerge in the space remains to be seen. All autonomous-vehicle efforts (including Uber’s) are still in development and pilot stages, so it’s hard to definitively state how big a role edge computing will eventually play in getting a meaningful amount of these vehicles on the road.

Nelson said edge computing will undoubtedly play a big role in other applications, such as virtual and augmented reality or healthcare. “Edge is emerging,” he said. “There’s no doubt about it.”  But when it gets to edge computing in the autonomous-vehicle future, he has his doubts.