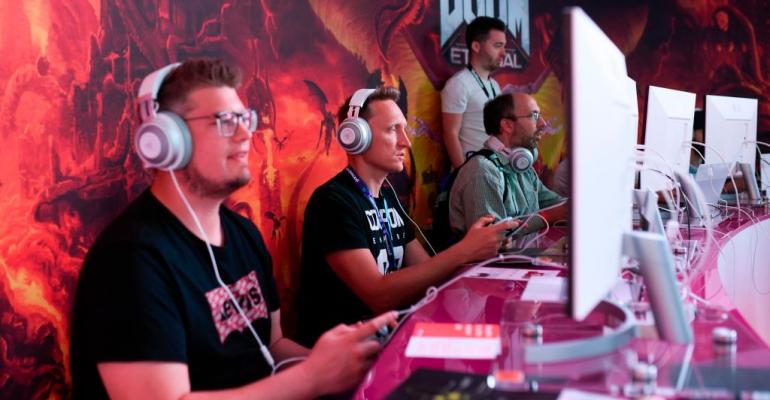 INA FASSBENDER/AFP/Getty Images
Visitors play Doom in the cloud at the Google Stadia stand at Gamescom 2019 in Cologne.
Design>Edge Computing

Deutsche Telekom Fights Google With a Netflix for Gaming

The telco says it has a leg up on tech giants because of its network assets and "experience with edge computing."

Stefan Nicola (Bloomberg) -- Deutsche Telekom AG is betting that building the Netflix of video games can stave off competition from the likes of Alphabet Inc.’s Google and Microsoft Corp. in the burgeoning sector of cloud gaming.

The German phone company said it will open MagentaGaming, which allows users to stream more than 100 titles, to beta testers on Aug. 24. Microsoft and Google plan to start their comparable xCloud and Stadia services in October and November, respectively. Companies are investing heavily in the service because the technology relies on superfast internet access and eliminates the need for expensive hardware, paving the way for millions of additional gamers to become customers.

Related: How Do You Play 'Halo' on a Phone? Stream It From an Azure Data Center Nearby

The field is highly competitive, though.

Google has lined up blockbuster titles for Stadia including basketball game NBA 2K20 and Cyberpunk 2077, a role playing game starring actor Keanu Reeves. Microsoft already owns many studios and popular franchises such as Gears of War. U.S. gaming giant Electronic Arts Inc. has more than 1,000 people working on Project Atlas, a cloud gaming service announced in October. MagentaGaming won’t have quite the same stable of hits to start with.

Finland’s Rovio Entertainment Oyj, the maker of the wildly popular Angry Birds mobile game, has already launched Hatch, a platform it has been rolling out in Germany, the U.K., Spain and Italy with backing from Sprint Corp. and Vodafone Group Plc. Telecom carriers including Deutsche Telekom, Vodafone and Telefonica SA have also invested in e-sports live gaming.

Deutsche Telekom says it can take on the tech giants because its large broadband network and experience with edge computing enables it to reduce latency by shifting data processing closer to the end user. This is key for a smooth online gaming experience, which requires less than 100 milliseconds of latency. Deutsche Telekom board member Claudia Nemat said in a blog post that the service can keep it under 50 milliseconds.

The company is investing billions of euros in 5G, considered ideal for gaming because of its high speeds and low latency. Offering such a service gives it a way to cash in on the surge in data traffic over their networks that the next generation of technology will create. New gamers may want to upgrade their home broadband or mobile contracts to higher speeds, which would boost margins.

While the competition in Silicon Valley has a significant cloud infrastructure and access to a massive catalog of high-profile games, Deutsche Telekom says there’s no reason its MagentaGaming service can’t co-exist with their services.

“Just because someone plays on one cloud gaming service doesn’t mean they might not use a second one, or even a third,” Nemat said. “After all, Netflix isn’t the only streaming service for movies and TV series.”