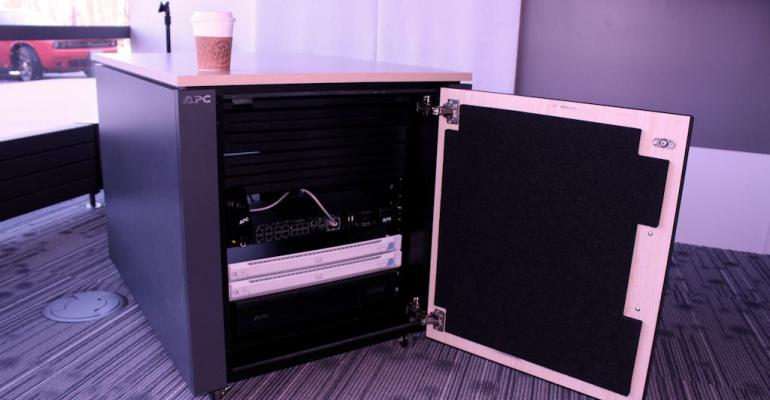 Where the cloud is not an option, maybe the best form factor is one you can rest your feet on.

It’s in the name of this very site, but what is a data center, really? If it’s any amount of IT assets gathered together in a centralized location, then it could be an 880,000 square-foot hyperscale facility in Ashburn – or, it could be a coffee table in the front foyer.

It’s no longer a great surprise that Schneider Electric’s APC division is devoting serious attention to the micro data center (µDC) form factor. The latest is a member of its NetShelter CX Mini series. Model AR4000MV is only a few feet tall, rests on casters, and its wood-tone table top finish is both customizable and spill-resistant. If it sounds like a piece of furniture, that’s because it is. 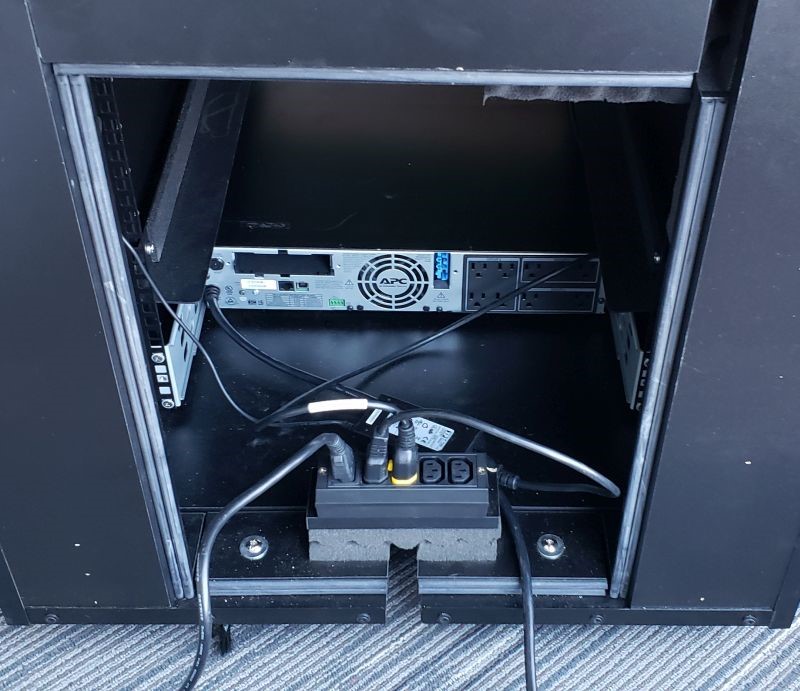 The Schneider NetShelter CX Mini with the back open

Inside is a 12U rack with a fan kit, a power module, sound-proofing, and shielding. During a press tour of Schneider’s Andover, Massachusetts, facility, Data Center Knowledge got its first glimpse of this undistinguished box where, if you’re not careful, some unknowing intern is likely to try and stash some sodas. Its rear entry door is geared to trigger an internal camera, which can be set to record and distribute the image of anyone who unlocks it – to stash sodas or for any other purpose.

CX Mini (which you can buy together with some Cisco HyperFlex hyperconverged infrastructure) is what Schneider engineers are calling their newest form factor for edge computing. Both visually and practically, however, it’s not all that different from the minicomputers of the 1970s. 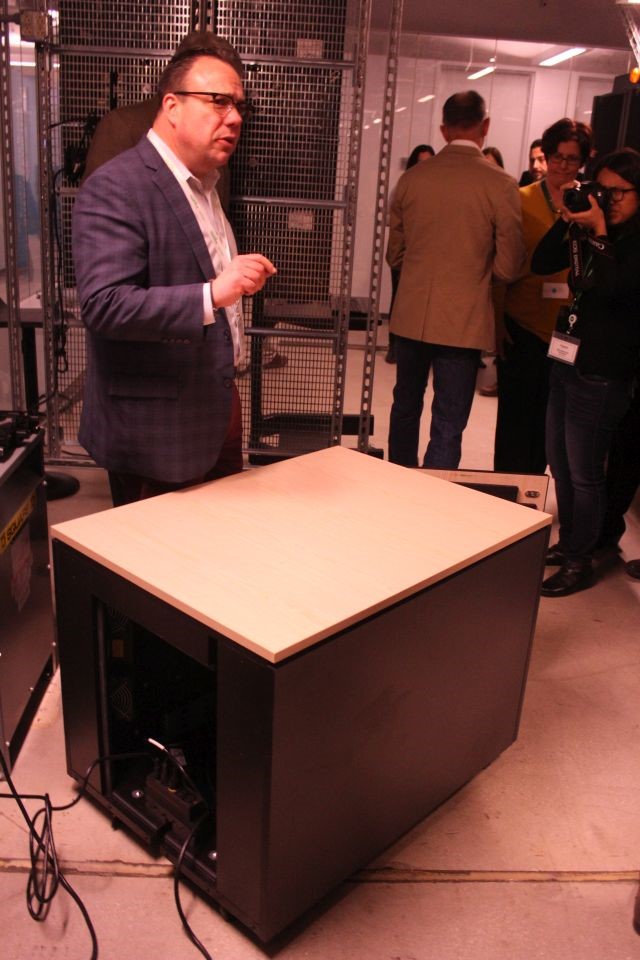 “In edge IT, there are not a lot of IT professionals out there,” explained Scott San Antonio, Schneider’s director of global strategic alliances. “So, with Cisco’s HyperFlex, which is designed to be managed and monitored off-site, coupled together with our solutions, you can picture this in an administrator’s office, or the lobby of a bank, and it sort of blends right in. You can throw a plant on top of this and no-one will even know that it’s your IT.”

Even with a plant on top, those four Ethernet cables will probably give someone a clue that this isn’t some cleverly masked mini-fridge.

Cisco announced this extension of its marketing partnership with Schneider last week. Working together, they’ve been producing reference designs for modular data centers, the form factor close to a standard shipping container. Now they’ll extend that relationship to include CX Mini configurations, along with taller models, in conjunction with Cisco’s HyperFlex HX200 series servers. 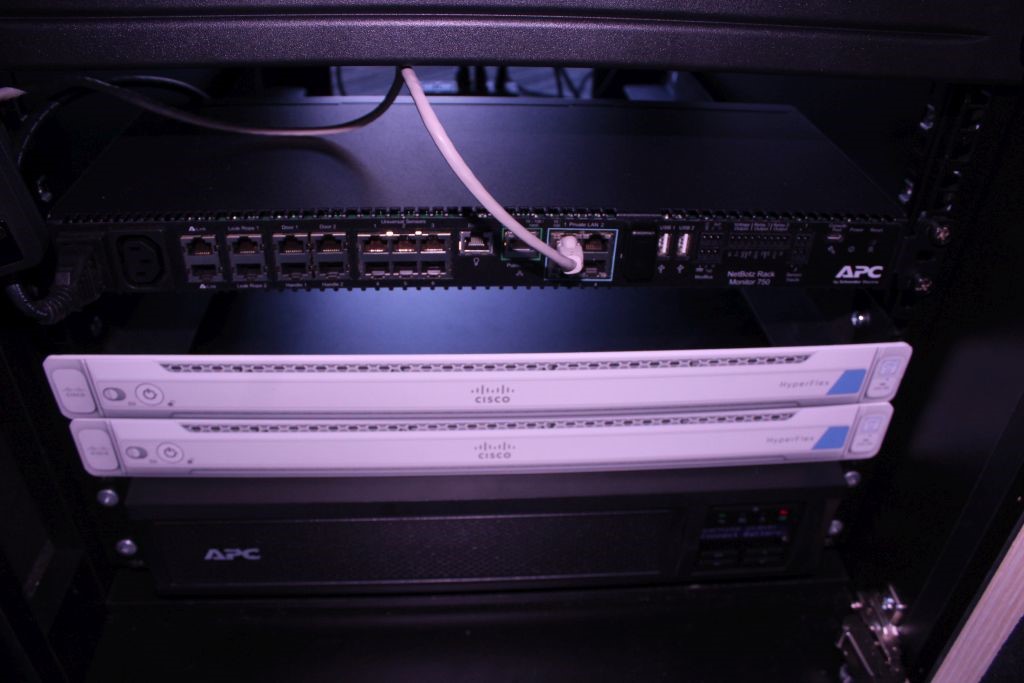 For example, Cisco updated the HyperFlex HX220c M5 (whose faceplates made cameo appearances in a CX Mini at the Schneider event) in March. It’s a 1U chassis that supports 1P or 2P Intel Xeon configurations, using the C620 chipset — which Intel says was intended for remote, Internet of Things installations that can involve up to four 10Gbps network connections. Schneider displayed working deployments of its CX Mini configuration with two HX200 boxes on-board.

“Customers request turnkey solutions. They want to get something quickly, know it’s going to work, roll it out wherever the deployment place is,” explained San Antonio. To prove his point, he rolled out his CX Mini demonstrator through the hallways of Schneider’s Andover R&D facility himself.

The company demonstrated an updated edition of its cloud-based EcoStruxure remote management platform, as a mechanism for monitoring the performance and health of multiple CX Mini deployments, including remotely, from the home office. 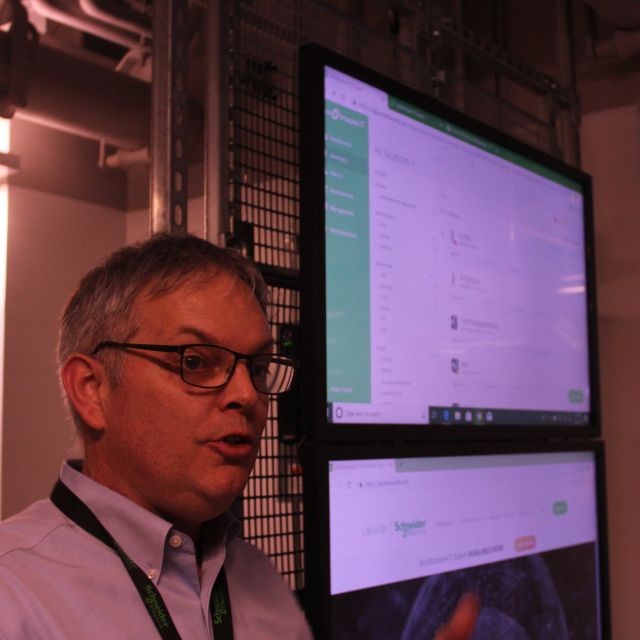 EcoStruxure, explained Schneider engineer Greg Sterling, “is something we’re targeting towards our highly distributed customers who typically have challenges deploying monitoring solutions in a lot of locations: banks, supermarkets, schools, places with needs for monitoring solutions, but that may not have a lot of IT staff on hand.”

At the data egress point of each CX Mini deployment is what Sterling calls a “gateway.” It’s not so much a network gateway as a drop-off point for log data that EcoStruxure, which is hosted by Microsoft Azure, then picks up along a kind of monitoring route. When an EcoStruxure user checks in for a report, that data then comes from Azure. That way, if there’s a power outage in one or more locations (a likely event for edge deployments), EcoStruxure will be able to report that problem through the user’s Web browser or smartphone app. 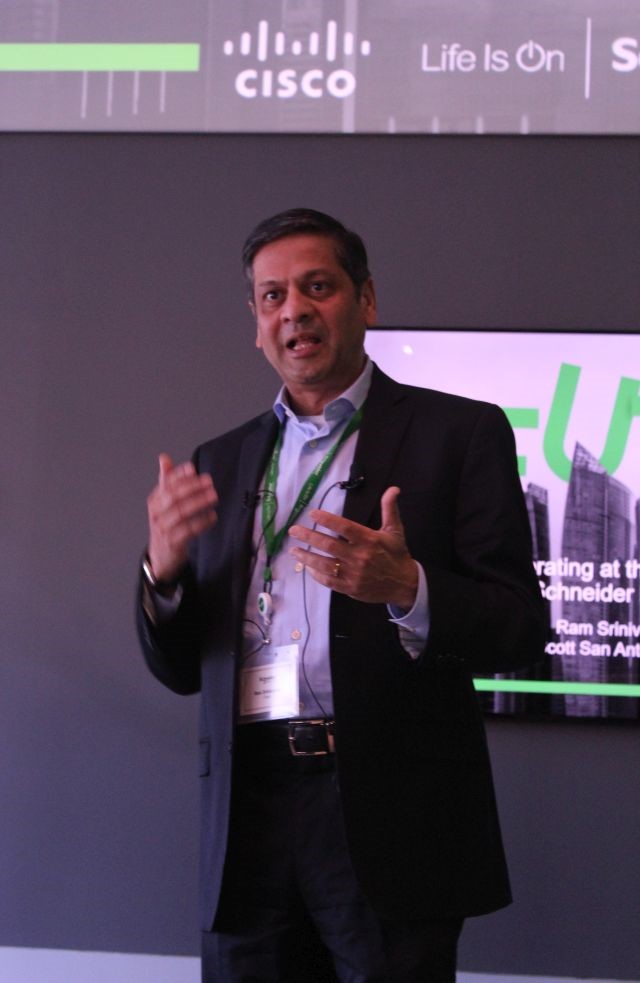 “Edge is our sweet spot,” said Srinivasan. “When we came up with HyperFlex, it was predominantly to make that differentiation.” He cited estimates that as much as half of all data will originate at edge deployment sites, including IoT hubs, by the end of next year.

We asked Schneider and Cisco representatives whether the end result of Srinivasan’s “differentiation” would be that customers will start with under-powered edge deployments and build up, or that they’ll start with over-provisioned systems and use EcoStruxure to scale them back down. 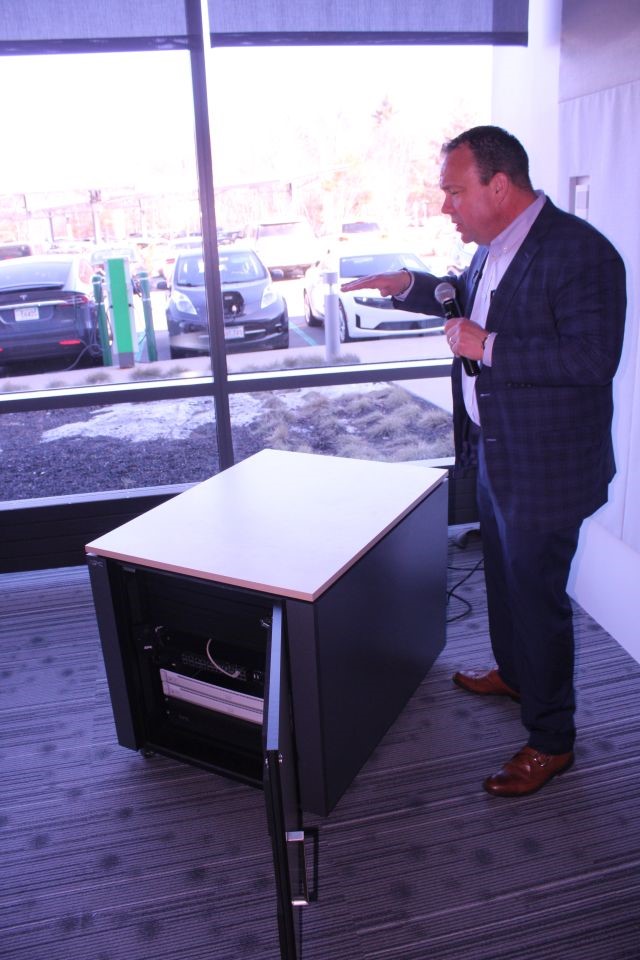 “If you need less power, you want to drive that efficiency,” he finally elaborated. “You want to be able to remotely manage, tune down, and maybe shut off one or two HyperFlex servers. And then if you need more, you want to turn them up. So, it depends on what your needs are. That’s the beauty of remote management: You have that flexibility, that malleability at the edge, depending on when you might need more storage.

“I think what we want to do,” San Antonio continued, “is be able to put our customers in a position where they can make that choice based on what their business needs are.”

So, Schneider’s and Cisco’s reference models, both now and forthcoming, will explicitly specify the frameworks with which customers will themselves specify just what it is they need an edge deployment to be. Meanwhile, some of those customers may be caught perching their feet on top of one.