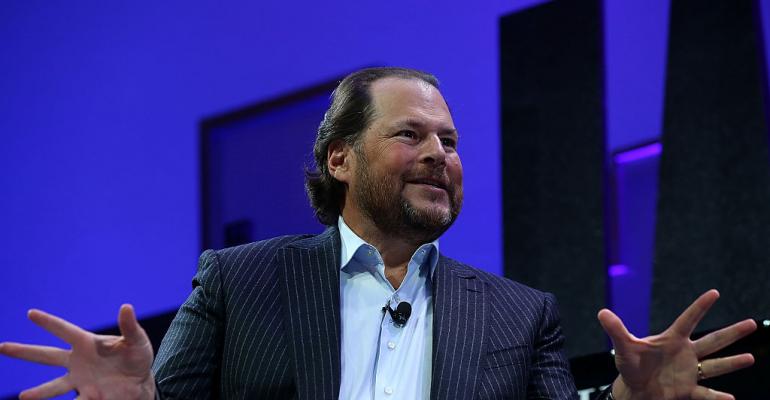 Salesforce’s MuleSoft and Docker are working on a tight integration to help enterprise step into the future.

Turns out one of them was Salesforce, whose recent acquisition MuleSoft is now hard at work tightly integrating its platform with Docker Enterprise, Docker’s flagship platform and main source of revenue.

Scott Johnston, Docker’s chief product officer, confirmed that Salesforce Ventures took part in the round but declined to say how much of it the cloud software giant was responsible for, or how big a stake in Docker it now owned. Docker’s SEC filing lists 31 investors in the round, and even if Salesforce is responsible for most of it, it’s not a huge commitment for a company with $8.4 billion in annual revenue.

Recently, Docker and MuleSoft have been working to help users of both MuleSoft’s API platform and Docker Enterprise to get more value out of the products faster through integration. “The aspiration is ... tight integration between the two,” Johnston said in an interview with Data Center Knowledge.

MuleSoft gives companies a standardized way to interconnect their applications via APIs. Its Anypoint platform has a long list of canned APIs and templates but also provides a way for developers to build their own that fit within its framework. It can be used for applications running in companies’ own data centers together with the ones that run in the cloud.

Salesforce bought MuleSoft for $6.5 billion this year to make it easier for customers to feed their enterprise data into its various cloud services. It’s also been deploying MuleSoft to interconnect its own various clouds to provide more cross-cloud capabilities to clients.

Docker’s current reason for being is helping enterprises give their existing applications the flexibility that comes with running applications in containers with as little friction as possible. Docker Enterprise automates the process of “containerization” of legacy apps, while also providing a software platform for running them and developing new ones.

Today, companies use MuleSoft primarily to interconnect commercial applications or software sold as cloud services (SaaS), tapping into its vast library of premade connectors, Johnston explained. Once MuleSoft is tightly integrated with Docker Enterprise, they’ll be able to easily expose legacy custom applications that already have APIs and have been “Dockerized” to this “API fabric” the same way they do off-the-shelf software, he said.

For applications without APIs, MuleSoft and Docker will provide “resources – including automation tools, blueprints, and starter packs” – to speed up the process of containerization and modernization.

The two companies have already been working with “four or five” joint enterprise customers, Johnston said, declining to name the customers. “The products can interoperate today, and we’re working with those customers and highlighting to them the joint value proposition,” he said.

Johnston expects the first commercial products of the integration to start coming out next year.

Docker and MuleSoft sales teams will align as well. While each individual company’s salespeople won’t be selling a joint solution, they will look for opportunities to bring the other company into the relationship, Johnston explained. “The products will be sold side by side,” he said. “The customer will still be buying two separate products.”

Modernizing legacy enterprise applications has been the core business focus for Docker, whose open source containers are the de facto standard for containerizing applications, but whose container orchestration platform Swarm has largely been eclipsed in the market by Kubernetes, the open source platform that originated at Google. Docker integrated Kubernetes into Docker Enterprise earlier this year.

Docker’s strategy now revolves around helping enterprises switch the way they build and run applications to the way the likes of Google and Facebook have been doing it. Adopting legacy enterprise systems for technologies and processes often referred to as “cloud-native” is a heavy lift, and most enterprises need all the help they can get. Docker and a handful of other software companies, such as Red Hat, Mesosphere, and Pivotal, have managed to get ahead of the pack in this space.