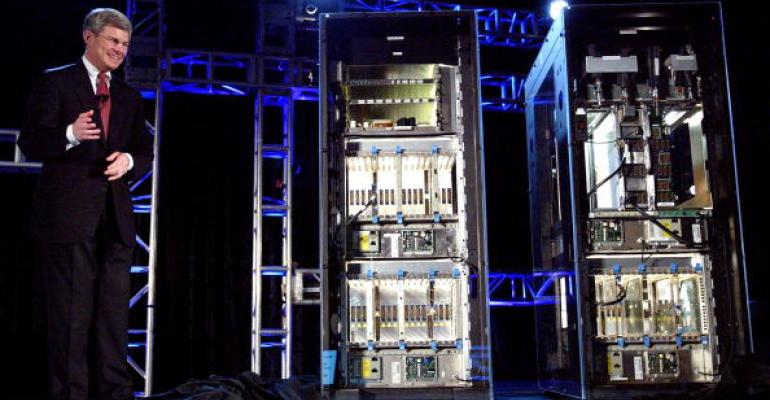 Docker this week announced the first update to its rebranded flagship platform with the release of Docker Enterprise Edition (EE) 17.06. Back in March, Docker rolled out the first Docker EE, built on the backs of what had been known as Docker Commercially Supported and Docker Datacenter.

The new release comes on the heels of a report last week from Bloomberg that the container company has been raising money, which will result in $75 million dollars being added to its coffers by the end of the month, bringing with it a new valuation of $1.3 billion — up $300 million from its previous valuation.

The features added to Docker’s flagship product indicate the company is targeting data centers, DevOps, and of course, the hybrid cloud.

Most important for the data center, perhaps, is Docker EE 17.06’s support for mainframes — specifically support for IBM System Z running Linux. “This means for an enterprise, all under one umbrella, all of your major applications can be containerized and managed by Docker,” David Messina, Docker’s chief marketing officer, told Data Center Knowledge.

See also: Why Docker is So Popular — Explaining the Rise of Containers

This should prove useful for DevOps teams saddled with legacy applications running on System Z. In March, Docker introduced the ability to port legacy apps to containers without the need to modify code, and this now makes that ability available for apps running on the mainframe architecture as well. Containerizing legacy apps had previously been offered by other companies, but had required refactoring.

“Companies that have a lot of old systems of record are not going to go and refactor all these applications,” Jenny Fong, Docker’s director of products, explained to Data Center Knowledge. “Sometimes for regulatory reasons they’re not allowed to touch the actual code, but they’re still looking for some improvements in terms of portability, in terms of how they can maintain and keep those applications secure.” According to Fong, some of the legacy apps that Docker has seen brought to containers are more than 25 years old, which makes security a big issue, since apps of that age are almost certain to be unsecure by design. Not only is it easier to conduct security scans on apps in containers, a containerized app is inherently more secure than an app running on bare metal or in a virtualized environment, due to things like the isolation factor and the added control that containers bring, she said.

‘Bring Your Own Node’

Across all architectures, Docker EE 17.06 has added new security features to the mix as well, mainly with the expansion of RBAC, or Role Based Access Controls. One of these is a feature that Docker calls “bring your own node.”

“New teams that want to join the Docker EE environment can bring their own nodes to the cluster,” Fong said, “and then through these new access control capabilities, the central IT team can grant them access only to those nodes. Basically, as a new team or a new line of business joining the fray, I only see those nodes. I don’t have the ability to leverage or use any of the other nodes.”

Policy-based automation capabilities have been enhanced as well. One example is a feature that allows for automatic image promotion that enables administrators to establish rules a container must meet before it can get “promoted” — such as into production.

“These rules can be based on tags that developers put on the image,” she said, “but they can also be based on the results of a security scan. If you think about an image that is going into a production folder, you can set a rule that says ‘this image has to be clear of any critical or major vulnerabilities before I will move it.'”

Particularly important for admins — as well as security teams — the new Docker EE also offers more granularity when it comes to assigning roles and responsibilities.

“The system now has the high degree of flexibility so it’s not force-fitting you into its roles and responsibilities requirements,” Messina said. “It gives you flexibility in that regard.”

With this release of Docker EE 17.06, coupled with the current round of behind-the-scenes fundraising, it appears that new CEO Steve Singh, who took over the reins in early May, has been busy. According to Bloomberg, he intends for much of the newly raised $75 million in venture capital to be used to build a sales and marketing team to target corporate clients.

That’s a necessity, evidently. In June, Fortune wrote that sources close to Docker estimate the company’s 2016 annual revenue to be somewhere in the neighborhood of $10 million. However, the article went on to quote a Docker spokeswoman saying, “This number is lower than our current revenue number.”