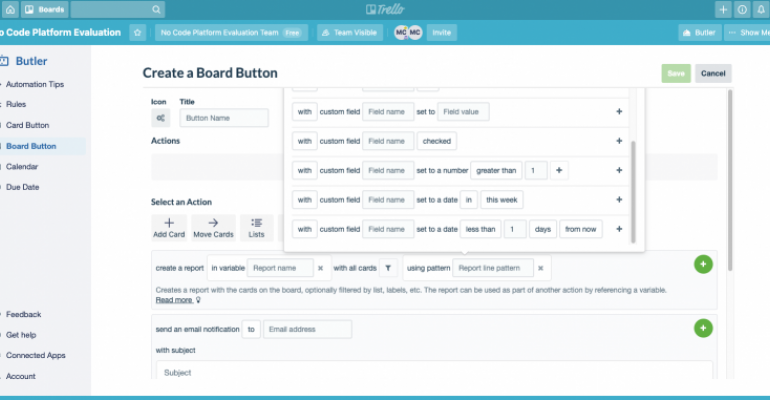 How to Automate Workflow with Trello’s Butler

At a base level, Butler can simplify handling repetitive tasks that are primed for workflow automation, but it can also extend beyond Trello via integration with third-party applications such as Slack and Dropbox. While IT could broadly provide end users with workflow automation capabilities, Trello limits the number of rule commands, button commands and time commands teams can run with its business-class license. The enterprise license doesn’t limit commands, but it does have a limit on operations--the individual action contained within a command. Therefore, administrators should think about using templates as a way of managing the distribution of rules, buttons and commands through boards.

Butler’s no-code rules use the simple syntax of “when this, do that,” making them easy to build without programming language skills. While they don’t support the complex logic of a traditional business rules engine, they allow an organization to automate routine tasks and create a set of best practices within the Trello actions paradigm. As a means to automate workflow, rules can perform tasks such as moving a card between lists within a board. It’s worth automating these kinds of actions because, in addition to saving time, they reduce the risk of error associated with having the user manually drag and drop the card.

Organizations can use rules to define actions that work on any object, so when a user completes a task, a rule could reorder that user’s task list to put the next highest priority task at the top of a list. Rules can address custom fields as well as external applications. The completion of a task in Trello could result in updating a value in Jira, for example.

Buttons essentially allow users to perform the “do that” action with the click of a button, either in a card or at the board level. Board-level buttons have more limitations, but they do provide a simple way to execute manual tasks such as creating and moving cards, creating lists and generating reports. For example, a company can create a best practice for documenting client meetings, using a board button that creates a card that includes the meeting URL and predefined objects for recording notes, action items, attendance and any other useful data.

A card button has greater capabilities because it can act on any card-level object. One particular function, which is also a rule capability, is to use an action button to propagate changes from one card to other cards. For example, a card button could create a new card once the tasks associated with the first card have been completed. This also allows the linking of cards, so that users of a board can see the relationships and task dependencies between cards.

Time commands provide a way to create and manage service-level agreements, escalations and project timelines. From an end user perspective, commands that send reminders and reprioritize tasks would be useful calendar-based commands. For example, a team may want to send a Slack message to a board’s members every morning with a list of items in that day’s queue.

For organizations that want to allow users the freedom to create and manage their own commands, Trello provides good documentation. It might even make sense to have new employees create their own board as part of their on-boarding process.

IT teams that provide training or documentation resources to end users could create short videos showing contextual examples of how to use these tools. In addition, Trello’s Butler monitors user behavior and can create recommendations for users on how to automate their repetitive tasks.

With that said, IT teams should consider educating heavy users of the platform on quota limitations so these users don’t build complex action sequences to fully automate a workflow that might be better managed in a separate low- or no-code platform.