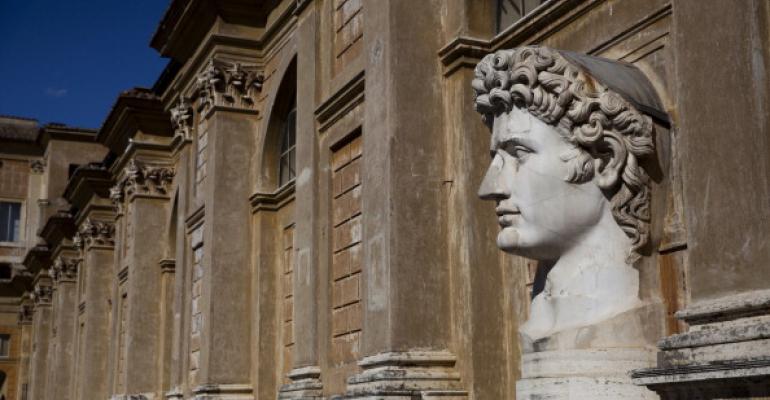 In Vatican, a Data Center for Centuries’ Worth of History

As Vatican digitizes tens of millions of pages of manuscripts, here’s the infrastructure story behind the enormous effort.

Building a compact data center is always challenging; but how about doing it in a historic 15th century library full of priceless antique manuscripts, under the watchful eye of the Pope?

The Vatican Apostolic library was founded in 1451, but its collection includes letters and drawings by artists and scientists dating back to Michelangelo and Galileo, books from Napoleon’s personal library, maps and scrolls and papyri, manuscripts in Latin and Greek, and the earliest known Slavic alphabet dating back to the third century. There are thousands of coins, medals, and photographs. The documents and artefacts cover science, mathematics, and astronomy – not just religion.

The collection represents centuries’ worth of donations to the Vatican library, and naturally, scholars around the world want to study its contents. To make it easier for more of them (beyond the select group of specialist researchers who have permission to visit the library) and to enable scholars to study objects that are simply too old and fragile to handle, Vatican decided to digitize the collection.

In 2012, the library started a scanning project to preserve and record over 80,000 of the manuscripts, some 42 million pages. The process for each manuscript includes a secure transfer from the library to the conservation lab (often in the middle of the night for security reasons), followed by two months of chemical treatments to preserve the pages, a month of conservation and restoration, and another month recoding the pages using Metis document scanners that cradle books, so they don’t have to be opened flat.

The highest-resolution scan produces a 1.7GB image for each page, preserving every detail (and sometimes revealing details that aren’t visible to the naked eye). The full-res images are saved to film as a series of QR codes and stored in a vault in the Arctic World Archive, a data storage facility inside a former mine in Norway built by a company called Piql in collaboration with the state-owned Norwegian mining company Store Norski.

Part of a manuscript scan from the Vatican Apostolic Library

Lower-resolution copies live on two storage systems in Vatican data centers. One is a Dell-EMC Isilon scale-out NAS, with over 4 petabytes of capacity split between two data centers; the other is about 5 petabytes of ECS object storage. Both systems can be expanded as the scanning progresses. About 16,000 manuscripts have been digitized so far, all available on the library website [https:// digi.vatlib.it].

A Design for Posterity

The data center in the basement of the Belvedere Court of the Apostolic library on the Vatican grounds fits into just a quarter of the size of the main data center, which has 40 cabinets (on a network built by Panduit). “It’s really high density,” Gian Piero De Martino, manager of Panduit’s Southern Europe Network Infrastructure unit, told Data Center Knowledge in an interview. “We had to put everything into a very squeezed space.”

The Belvedere Court building was renovated in 2007, adding security cameras and tracking for RFID tags on all the manuscripts. There had been a small data center onsite, but it didn’t have the highly reliable, secure network infrastructure and capacity needed for the project.

Cooling and power monitoring in a historic building takes special expertise, and Panduit had already installed systems in the 14th century buildings of the University of Pisa, so they had the experience. “We were able to start from scratch,” De Martino explained. “They gave us an empty room in the historical facility and said, show us what you can do.”

Using hot-aisle containment with hot/cold air separation inside the cabinets and segregating the cabinets to improve airflow delivered a power savings of nearly 30 percent compared to the previous system, he said. Vatican City State has its own electrical grid, using Rome’s municipal grid as backup. For failover, the data center uses a UPS system by the Italian supplier Borri.

All that adds up to a state of the art data center for a long-term preservation project. The film in (literally) cold storage will last some 500 years, and the Dell-EMC system installed by Panduit has a guaranteed lifetime of 60 years, De Martino said. “In a thousand years you will be able to see something written 700 years ago.”