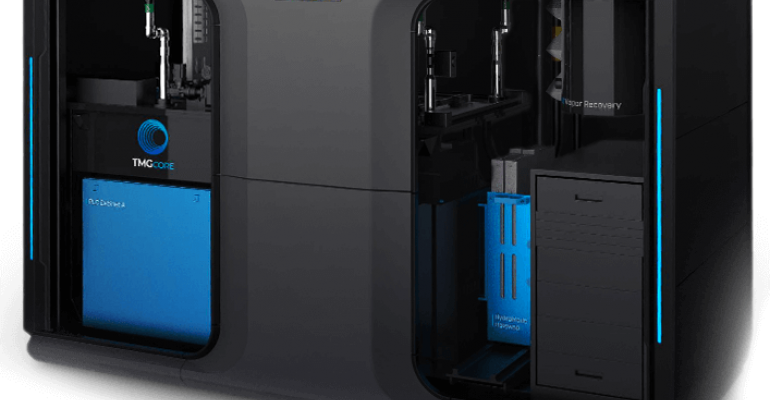 The startup says its plug-and-play design can pack 1MW of data center inside 320 square feet.

TMGcore says it can meet high-performance computing (HPC) needs of any enterprise with its new automated, liquid-cooled data center enclosed in a box about the size of a large sport utility vehicle.

The Plano, Texas-based startup introduced its line of self-contained, energy-efficient, modular data center systems at the SC19 conference in Denver in November. The company unveiled four models of the OTTO data center platform, the largest of which is about the size of a Chevy Suburban and can pack 600kW of compute power within a footprint of 160 square feet.

“We reduce CapEx costs quite a bit, TMGcore COO Taylor Monnig told DCK. “It’s a massive reduction in the size of data centers. A typical one-megawatt data center is 6,000 to 8,000 feet, but we can do it in 320 square feet.”

“We are not using water or air conditioners. We deliver power extremely efficiently,” Monnig said.

At the same time the startup competes with other liquid-cooling companies, such as GRC (formerly Green Revolution Cooling), Asetek, and CoolIT Systems.

Gartner analyst Alan Priestley said TMGcore’s technology was an interesting concept. The company could attract academia or industry customers that need purpose-built data centers for their HPC needs, either as a new installation or as part of an existing data center.

In the HPC market, customers are willing to explore and purchase new innovations from smaller companies or start-ups like a TMGcore, he said. That’s different from the enterprise market, where risk-taker customers are few and far between.

“Data center cooling is a big problem, and when you put GPUs in a data center, it’s massively dense configurations that create a lot of heat. So there may be potential for this type of technology,” Priestley said. GPU accelerators, primarily by Nvidia, are widely used to offload heavy parallel computation workloads from CPUs in both traditional supercomputers and machine-learning clusters.

TMGcore spent the past two years developing OTTO, but it wasn’t exactly in stealth mode during that time. In 2018 it built a 150,000-square foot cryptocurrency mining data center in Texas to generate extra income.

Building its own large data center and using its own equipment allowed the company to perfect the OTTO technology, Monnig said.

“We put our money where our mouths are and bought a data center and deployed our technology to truly understand how to operate at commercial scale,” he said. “Everyone else goes small and builds big. We built big and then went down so that we could understand the hardest hurdles we have to jump through – and the rest is a lot easier.”

OTTO comes in four models, three of which are data centers for edge computing. They all feature lights-out operations, including internal power distribution and built-in networking, so no cables are needed, Monnig said.

Three of the four models, including the large OTTO 600kW version, uses robotics to automatically swap servers. That simplifies management and helps reduce the need for IT staff, which is particularly important for edge data centers, many of which are expected to be deployed in remote, hard-to-reach areas. The robotics also keeps the servers dry and vapors from escaping the data center system, the COO said.

TMGcore sells its own servers for the OTTO system. But it has also partnered with Dell EMC, which is making a version of its PowerEdge C4140 server compatible with the OTTO system.

The OTTO modular data centers also support other vendors’ servers. To make them work, TMGcore engineers would have to remove the fans and do some modifications related to power and networking. “We are happy to work with customers to get their equipment in,” Monnig said.

The company is currently working on a storage solution and expect to have news on it in the coming months, he said.

TMGcore previously announced that it had partnered with Vertiv to develop the OTTO systems and with Jabil to manufacture them.