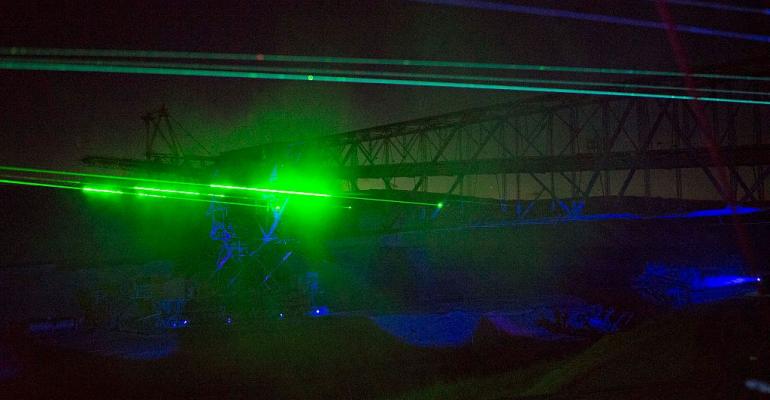 HyperPod for data centers will come with an optional laser-grid feature to secure sensitive equipment.

Some data center rack designs don’t accommodate doors. So what do you do when you have some important equipment in a door-less rack that you can’t just have anybody walk up to and mess with? Schneider Electric says use lasers. Yep, the same kind Tom Cruise likes to hover over.

One of the upcoming features in Schneider’s recently launched HyperPod is what Steven Carlini, a top marketing exec for the company’s data center products, refers to as the “cage-less cage.”  It’s a laser mesh that surrounds racks and generates an alarm when someone comes in contact with it, Carlini said in an interview with Data Center Knowledge.

“If you put in racks that don’t’ have any kind of doors, it’s kind of a laser grid that goes around,” he said.

The company publicly launched the HyperPod about a month ago. It is essentially a standardized unit of data center capacity Schneider now designs data center solutions around. So far, it’s little more than an air-containment system, Carlini said, but as a standard block it opens a lot of possibilities for designing highly optimized power, cooling, and management components.

“There’s a lot of cool stuff [that’s possible] when you standardize on a block,” he said. “We’re looking at it from many different angles, and we’ll see which ones people are most interested in.”

Designed for quick and flexible deployment of data center capacity, the HyperPod can accommodate any kind of racks – standard 19-inch racks and 21-inch Open Compute racks, for instance – and makes it easy to roll them in and install.

It comes in 8-rack to 12-rack configurations, but Schneider also offers a “triple version,” which accommodates 30 racks in a single pod. Unexpectedly, the triple version has become the most popular option with customers, Carlini said.

The company plans to roll out new features for the HyperPod, including the cage-less cage, throughout 2018.