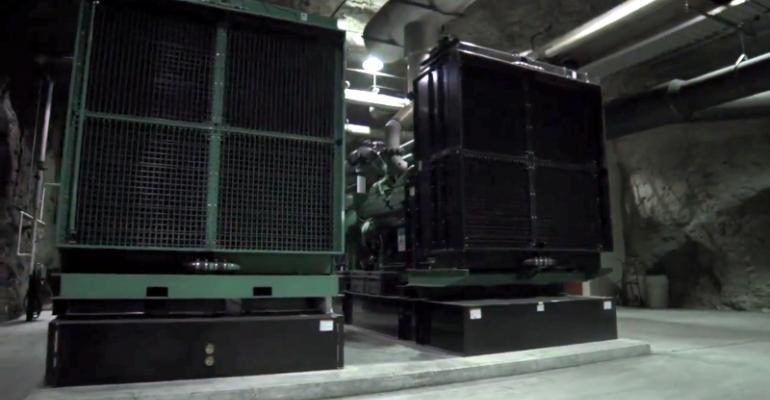 Bluebird Networks
Backup generators of the Bluebird data center inside a former mine in Springfield, Missouri
Design

Safer Underground: Bluebird Expands Its Data Center in a Mine

The benefits of being underground outweigh the challenges of building out its facility for the service provider.

In Springfield, Missouri, 85 feet deep into the Burlington Limestone lies an old mine. More than 5 million square feet of rock has been excavated over the years, leaving a 2-square mile block of limestone honeycombed with passages.

Since you’re not reading a site about geology, or mining, you’ve probably guessed that there’s a data center in that mine. Bluebird Network recently expanded the capacity of its 80,000-square foot facility, carved into the solid lump of rock in a geologically stable part of the world.

You’ve probably also guessed that physical security is a big deal for Bluebird. Look at the location in Google Maps’ Satellite View, and all you see is a track, gently descending into the ground. There are no fans or generators – in fact, there’s no surface infrastructure at all.

“Anything at the surface is at risk, if there’s a tornado or an earthquake; most of the damage is at the surface, but we continue to run,” Todd Murren, data center general manager at Bluebird, told Data Center Knowledge.

Missouri is in a tornado zone; snow storms can be an issue as well. While being underground can be a flood risk, the mine is on higher ground, so water drains away, which is also important to some of Bluebird’s neighbors in the mine, who use it to store everything from documents to cheese.

There’s also minimal earthquake risk, as the site is far away from any known faults. Murren did note that fracking has increased quake risk slightly, but the Burlington Limestone is a single block of rock. “If there was any movement, the entire facility would move,” he said.

Then there’s the obvious benefit of protection from physical intrusion. The data center is in a corner of the mine; it’s got two solid rock walls (the other two sides are the entrance and expansion into the rest of the mine). The only entrance has card access and biometrics, with a security guard for final access control.

“The physical resiliency is beyond anything that can be constructed,” he said. “We're 85 feet underground, with 65 feet of solid rock above us.”

As far as Murren is concerned, keeping infrastructure off Google Maps is a security benefit all its own. When a data center is above ground, he pointed out, “critical elements to making them resilient, like generators, and chillers, and transformers, are all highly visible on Google Earth. On Google Street View, you can literally walk around a data center and take inventory of critical operations. None of that is visible when you're underground; that's subtle, but in today's world, it is a benefit.”

Fitting out an underground data center has its challenges. For one thing, many of the techniques used on the surface don’t work. There’s no GPS to locate hardware, and irregular rock walls require a lot of customization for internal structures.

On the other hand, you don’t have to lay a foundation or build walls. Unlike a salt mine, which is dug vertically, the limestone mine went sideways, creating horizontal galleries that make it an ideal shell for equipment that only needs raised floors and a dropped ceiling for power, networking, and cooling.

Expansion is a matter of adding those and leasing additional space. It’s an operational expense for Bluebird. Also, it means the company can build out in smaller increments than others.

While it was harder to put generators underground -- “Combustion engines need to breathe” – the stable temperature (64-65F all year) gives Bluebird both a source of cool air (drawn in by fans) and a constant operating environment. That means the chillers can be set to run very efficiently, venting excess heat above ground and using the cool air in the mine to chill water. The hot air is vented through a 13-square foot shaft, straight out of the mine to prevent it from mixing with the cool air inside.

“In the Midwest we have four seasons; it will be below zero for maybe a week or two, and in the summer, it will peak above 100 degrees,” Murren said. Such temperature extremes are an above-ground data center challenge that underground data centers don’t have. “A chilling unit in four-degree weather doesn't run at its most efficient; nor when it's 102 degrees.”

In terms of redundancy, you’ll find most of what you’d expect from a resilient data center design in Bluebird’s mine. There are four separate 100GB network links to the above-ground world, all coming into the mine in different places, with space for a fifth one if needed for future expansion. Power is delivered via two different utility providers and two separate paths, each with its own underground transformer vault.

The use of variable-frequency drives in the cooling systems results in a reasonable PUE (between 1.5 and 1.6). “We’re constantly working to tweak and adjust the electrical and mechanical systems to improve things,” he said.

Another advantage of constant year-round temperature is that power usage is consistent. Also, none of the heat is ambient. “The only heat we’re cooling is from the equipment.”

The cost of power is “competitive,” according to Murren – though certainly not as low as in some areas where hyper-scale cloud providers put their facilities – but there is a mix of power sources available, from renewables to coal and gas.

Getting equipment into the mine is surprisingly easy. The floors are built up to a height of 4 feet, the height of a semi-trailer. Trucks can drive into the facility, back up to a loading dock, and roll equipment straight to the cages. That’s an advantage when you’re unloading systems that can weigh up to 2,000 lbs: you don’t need any special equipment for deliveries.

Bluebird has expanded the facility to add more space for customer equipment, and it’s now adding another 4,000 to 4,500 square feet. “There’s three areas we can outgrow, and we’ve outgrown all of them,” Murren said. The current expansion will require additional electrical infrastructure, including a third utility feed, a third backup generator, another UPS, and more fuel-tank capacity. He’s also considering a flywheel for UPS energy storage in the future.

As with the previous expansions, this one won’t require any extra cooling.

Where the geology supports it, keeping data centers underground has many advantages. It’s secure and resilient, and with over 5 million square feet of galleries for expansion, Bluebird has plenty of room to grow.

Finally, “there’s an inherent feeling of security when humans go underground; it is a differentiator.”