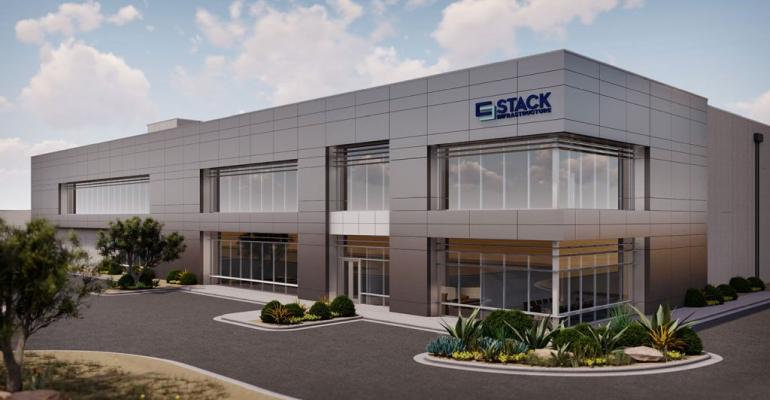 It has cookie-cutter designs for time-sensitive clients but remains open to customization.

The 150MW hyperscale data center Denver-based Stack Infrastructure recently said it would build in the Phoenix suburb Avondale marks just one more venture in what commercial real estate giant CBRE continues to call the nation’s third most active data center market.  There, Stack will be meeting an abundance of competitors, all of whom have plans to take advantage of Arizona’s open space, low humidity, and, according to CBRE, flexible negotiating terms.

But it’s not looking to copy anyone else’s model for hyperscale services, which at one level could be perceived as a cookie-cutter or assembly-line approach.

“What we don’t want to be is Henry Ford,” Matthew VanderZanden, Stack’s chief strategy officer, told DCK. “You know, you can have any color as long as it’s black. We do want to provide them with that option (very available, very standardized). On the other hand, if somebody wants to come in and pick blue or yellow or red, we want to make sure to be able to enable that, as long as they understand the implications of their choices.”

Last January, Stack launched construction of its second Virginia facility, this time in Manassas. In an interview with us this month, VanderZanden noted some attractive aspects of the Phoenix market, namely business-friendly local officials and low risk of natural hazard. Among its incentives, Arizona offers data center builders ten years of tax exemption, with the opportunity to double that exemption period if the builder qualifies for certification as a Sustainable Redevelopment Project.

Related: The Dunk Tank Reconsidered: How OCP May Yet Immerse Your Servers

For Stack to be competitive in Arizona, VanderZanden believes, it needs to offer customers a variety of deployment options — for example, trading off power infrastructure redundancy for cost savings, deploying racks in smaller or larger blocks of space, or a variety of choices for their critical power baselines.

“Different companies have very different views on the optimal approach to a mechanical solution, or a cooling solution,” he told us. “So balancing that potential solution set with the resources available in a fairly arid climate like the Phoenix market is another set of flexibility points we like to keep open.”

Still, said VanderZanden, Stack has pre-determined delivery intervals for the options it does offer and will stop short of offering options when it can’t guarantee quick delivery. Think of a construction project using pre-fabricated components whose architecture has taken place well ahead of time and you get more of the idea.

“If a client wants to move as quickly as possible, we have an existing approach that fits in, carefully balancing between very fast delivery and low cost,” said VanderZanden. “If we stick to that basis of design, then we’re able to scale in a more hyperscale fashion, duplicating, and almost stamping out, data halls.”

Each new client has the option of stepping out of that hyperscale model, trading speed of delivery for customization. But how much flexibility can Stack (or any data center operator for that matter) offer with respect to cooling?  After all, the whole point of building a single facility for multiple tenants is so that they can share resources like climate control and as a result leverage economy of scale.

Here is where Stack made its own curious choice. Rather than adapting a special cooling solution for Arizona’s operating conditions, as one might expect, it chose a single cooling system that it could deploy in multiple markets, including Reston, Virginia; Dallas; Chicago; Atlanta; and San Jose, California. “It’s a good solution across all markets,” said VanderZanden — and one that is less reliant upon water.

That’s convenient enough for Arizona’s arid climate. But it’s not an adiabatic solution, the CSO said, which according to him would consume more water in the evaporation process than Stack’s design. “And therein lies the tension,” he remarked. “It’s a water-scarce region. You just want to be careful to use the appropriate amount of resources, given the thing you’re trying to accomplish.”

VanderZanden’s argument appears to contradict the general observations about adiabatic cooling – specifically, that a closed-loop adiabatic cooling system can be effective and conserve water at the same time. Indeed, a 2015 Imperial College London study [PDF] involving tests with Phoenix-based data centers concluded among other things that air cooling options end up consuming more water anyway, particularly in arid climates. “In particular, while the ‘air cooled condensers/no evaporation’ option has no direct WF [water footprint],” the report reads, “it requires significantly more electricity to achieve the same cooling. The WF of generating this additional electricity more than neutralizes the gains of not having a direct footprint.”

But in recent years, CyrusOne (one of Stack’s largest competitors) has been standardizing around an air-cooled water-based system, which it claims is net-water-positive. VanderZanden said he also has been advocating for air-cooled across the board, with an integrated waterside economizer, which chills water using ambient air without mechanical assistance.

“We certainly wanted to select something that was not incredibly water-intensive,” he told us. “I view water-intensive cooling systems as an area of focus over the next couple of years. [But] we wanted to be as efficient as possible, and we wanted to be able to deploy quickly in a variety of environments. It is not a perfect solution in and of itself, and we continue to look for the best, most scalable, most efficient cooling technology on a more-or-less ongoing basis.”

There’s no word yet as to when Stack expects the Arizona project to be completed, especially during the continuing pandemic.