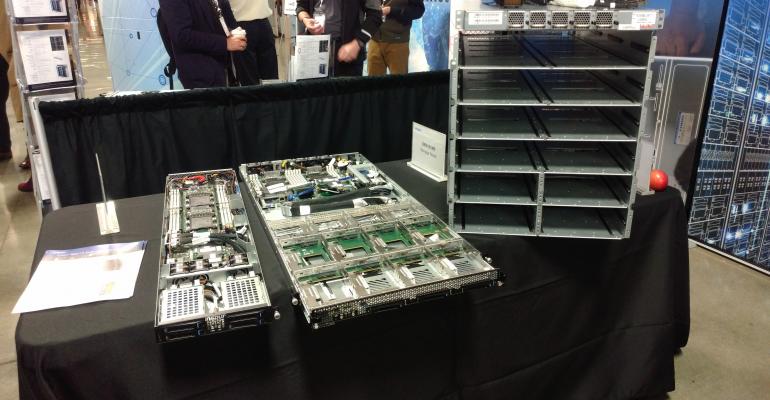 At its second annual summit, the foundation says its open-source tech is getting real market traction.

This year is the year data center hardware designed to the Open19 standard will see broad adoption, Yuval Bachar, president of the Open19 Foundation and principal engineer of data center architecture at LinkedIn, said from stage last week at the young foundation’s second annual summit at Club Auto Sport in San Jose.

Result of an exercise at LinkedIn to rethink the way servers and network switches are installed in mid-size and small data centers, Open19 gear has been deployed at scale in the social network’s facilities in Oregon and Texas. Now, according to Bachar, the technology is starting to see real market traction outside LinkedIn.

He didn’t name the companies, but one of them may be Microsoft, LinkedIn’s parent company. Since last year, LinkedIn has been a member of the Open Compute Project, the open source data center technology community where Microsoft is one of the primary players. LinkedIn contributed the Open19 spec to OCP earlier this year, and Kushagra Vaid, who leads the team that designs hardware for the Azure cloud platform at Microsoft, told us earlier that there were “some good things in Open19.”

In addition to the two hyperscalers, six more companies are either evaluating or already deploying Open19 hardware, according to Bachar.

All the gear covered by the standard is now available from vendors, who showcased Arm, AMD, and Intel servers at the conference. You can buy Open19 servers, power shelves, cables, and cages today, according to Bachar.

“By the end of the year we’ll report where we are, but we expect very high adoption,” he said.

Besides easy and quick installation, the savings come from things like replacing an individual power supply on every server with a shared power shelf, reducing cable costs by 90 percent, improving energy efficiency of the power distribution, and having five hardware vendors compete for every server slot in an Open19 cage.

One of the biggest design goals behind Open19 has been to simplify and accelerate hardware installation in a data center.

According to Bachar, a group of technicians, with a little training, can load 100 servers in a rack in about 40 minutes – an unprecedented timeframe for something that “takes days to do, if not weeks in some cases.”

There’s been so much focus on speed and simplification partly because the standard is being developed to address the difficulties of deploying and managing lots of edge-computing sites, many of which can be in remote, hard-to-access locations.

According to Bachar, the message has been resonating with edge builders. “We are right now the established de facto edge technology of choice,” he said. “Every place that you’re thinking about edge, people directly associate this with Open19 hardware.”

Packet, the bare-metal cloud provider that recently started augmenting its traditional data centers with edge computing sites at wireless towers, has been developing Open19 hardware of its own, betting that the standard will enable it to launch new “edge cloud” locations faster than it’s been able to do so far.

Sharing his deployment experience at the summit, Brian Karstetter, Packet’s senior director of product and strategy, said it took his team about three days to deploy three edge sites in Boston and Chicago using traditional hardware. “If I had Open19 – and when I have Open19 – I’m going to be able to do three sites in three hours,” he said.

A company called German Edge Cloud is testing the concept out as it prepares to roll out an edge data center network in Germany. Owned by the electrical and IT enclosure giant Rittal, the company wants to provide edge computing services to German manufacturers from edge sites located on their own factory floors, Jason Rylands, a VP at German Edge Cloud, said in a presentation at the summit. It’s currently running pilot Open19 deployments for that purpose, he said.

At the show, Bachar announced a new Open19 “self-certification” program.

Essentially, it allows a vendor to certify a solution as compatible with the Open19 specs and put an Open19 logo on the product. There’s no requirement for the foundation to review the design and approve or disapprove the certification.

“We don’t really qualify you,” Bachar said. “We give you the specs, and it’s your responsibility to make sure that you’re compatible with the technology.”

Like the Open19 specs, the certification today is “hardware-centric,” but he expects to see software packages to get integrated into the specs in the future.

Opening another door for innovative ideas to come under the Open19 roof, the foundation recently launched an innovation committee. The idea is to put resources behind interesting technology or research ideas that are a good fit for the foundation, Kamal Deva, director of software engineering at Salesforce, said while introducing the committee at the summit.

“Open19 is ready to help you guys if you have some innovation ideas,” he said.

There weren’t many vendor stands at the event, most of them by server companies. One stand, however, displayed a liquid-cooling solution by ZutaCore, a startup with offices in Israel and Silicon Valley that’s been aligning itself with Open19.

Bachar said a liquid-cooling technology was on its way to becoming part of the Open19 standard, and all indications are that it will be based on the ZutaCore design. The solution brings liquid coolant directly to server chips, where it turns into vapor and travels to a heat-rejection unit at the bottom of the rack to get cooled and turned back to liquid.

Several solutions using this concept, referred to as “two-phase cooling,” are on the market. But the blind-mate server connectors on ZutaCore’s manifolds that deliver coolant to the servers make it especially Open19-friendly. Like the Open19 cabling systems, they are designed for quick connection and disconnection of individual servers from the cooling system.

Liquid cooling is useful in high-density systems, where traditional air-based cooling solutions aren’t as effective. These include servers packed with GPUs or other types of accelerators used for machine learning.

So far, Open19 vendors have shown CPU-powered hardware, but GPU-based Open19 hardware is in the works, according to Bachar. “You will see a GPU-based solution coming,” he said.

One of the core elements of the Open19 design is the cabling system that simplifies and accelerates the process of connecting servers and switches in a rack.

To accommodate users that want to use Open19 servers with non-Open19 network switches, the standard now also includes a version of the data cable that’s compatible with traditional configurations on the switch side.

Bachar conceived the idea to form a foundation to ensure the standard isn’t associated with just one company together with Cole Crawford, founder and CEO of Vapor IO, over a dinner in London about two and a half years ago.

Established in 2017, the foundation would “enable commercial value” and wouldn’t force members to open-source intellectual property that differentiates them to be accepted. That sets it apart from the Open Compute Project, the open source data center and hardware design initiative started by Facebook.

Companies are required to contribute intellectual property in addition to membership fees to participate in OCP at higher-tier membership levels. OCP doesn’t require IP contributions from lower-level members. Rather than giving up their IP entirely, OCP members contribute it by allowing others to use their designs "through a patent non-assert," an OCP spokesman clarified in an email to DCK. An IP non-assert clause is a promise by the IP holder that they will not sue those who use their IP for infringement.

Open19 defines server form factors, rack cages, cabling, and connectors, but doesn’t touch anything inside the servers themselves, where vendors are free to innovate and differentiate without having to give up exclusive rights to that innovation.

It also doesn’t have a tiered membership structure, treating all members equally, although it does expect more from corporate members than from individuals. Each corporate member is expected to drive an Open19-compliant solution to fit their own, their customers’, or their partners’ needs and to take that solution to a second or third generation, since first-gen solutions are rarely mature enough for adoption.

In other words, Open19 doesn’t want any of its member companies to sit on the sidelines without bringing real products to market that are based on the standard.

There are now 27 corporate Open19 members and about 2,200 individuals, according to Bachar. The full specs were published in September and have been downloaded about 400 times so far. Foundation members get access to the full package of design and manufacturing files – a set of blueprints they are free to use to manufacture the entire solution, either exactly reproducing it or altering it in any way they need.

-- Updated with comments about IP contributions by an OCP spokesman