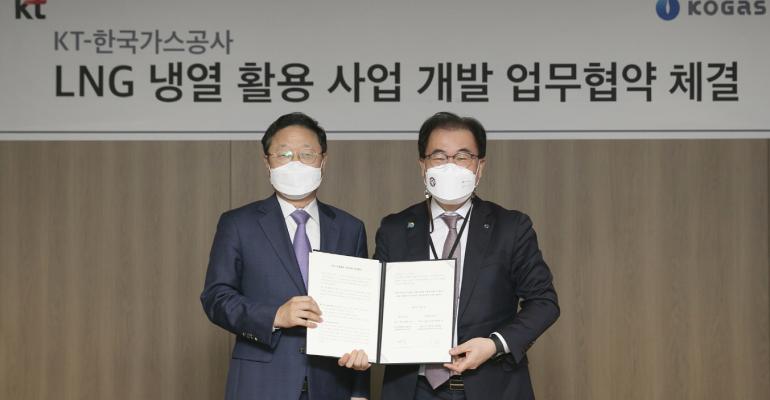 South Korean telecommunications giant KT is planning to build an unusual data center that would be cooled by a nearby liquefied natural gas (LNG) plant.

To this end, the company announced a partnership with Korea Gas Corporation (KOGAS), one of the world’s largest importers of liquefied natural gas.

KT is hoping to considerably reduce electricity consumption – and carbon emissions – of the potential facility by relying on cold energy that is released during regasification processes, when natural gas is converted from a liquid state.

The partners are set to collaborate on feasibility studies, safety, and domestic and foreign business development.

If successful, this would be the first data center of its kind.

KT (formerly Korea Telecom) is the country’s largest fixed-line communications provider, and its second largest wireless operator. On the IT infrastructure side, it runs a global network with 28 Points of Presence across 12 countries.

By partnering with KOGAS, the company hopes to take advantage of the cold energy which is emitted during regasification, the process that involves temperatures as low as -160°C.

KT wants to harness this refrigeration capacity for data center cooling: it said than an LNG-based cooling system could help a mid-sized data center – like its 335-rack Yongsan facility – save 12 megawatt-hours of electricity every month, which is enough to power 30,000 households in Seoul.

A similar approach to data center cooling was proposed in 2019 in Singapore by a consortium involving the National University of Singapore (NUS), Keppel Data Centres, and Singapore LNG Corporation. The vision has since evolved into a ‘floating data center park’ powered by LNG and hydrogen – with Keppel currently exploring the development of such a park at the Loyang Offshore Supply Base.

LNG-based cooling was also explored by Massachusetts startup TeraCool, that wanted to build data centers next to NLG terminals. Lacking data center partners, the company appears to have ceased operations, with its website defunct and no visible updates since 2014.