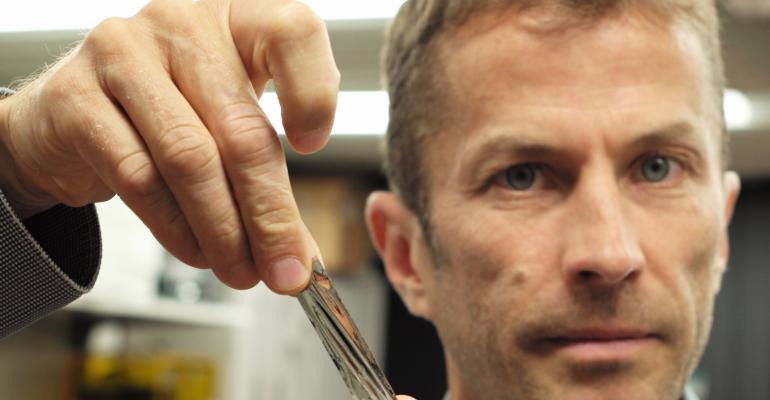 It’s not uncommon to think that tape is dead — or at least on the way out. But this venerable storage medium keeps on going, with periodic jumps every couple of years increasing the amount of data that can be stored on a square inch of the magnetic material. The latest record, set recently by IBM Research, takes it to 201Gb per square inch, on a sputtered tape from Sony.

Sony’s sputtering technique deposits a multilayer structure of magnetic and other particles more densely onto thinner tape with a smoother surface. There are also new signal processing techniques for reading data, at a density of 818,000 bits per inch, significantly improved head positioning, and new read heads that take advantage of the physical improvements to the tape. All that adds up to a track density of 246,200 tracks per inch.

Not Coming Soon to a Data Center Near You

But if you’re hoping to see this new-generation tape arrive in your data center sometime soon, don’t hold your breath. We spoke to Roy Cideciyan, one of the authors of the IBM research paper announcing the breakthrough, who expects a decade or so will pass before basic research like this is turned into a product. Technologies in the currently shipping TS1150 tape series, released in 2014, took eight years to go from the lab to commercial tape drives.

This latest breakthrough does however put tape firmly on the growth roadmap predicted by INSIC, the Information Storage Industry Consortium. It currently predicts areal density growing at 33 percent per year, reaching a predicted density of around 90Gb per square inch by 2025, and 270Gb per square inch in 2028. What seems at first to be a huge improvement in tape technology is actually just the latest step in an ongoing improvement in storage capacity.

Even so, it’s an impressive amount of data; thanks to the thinner tape, you can expect to fit 330TB of raw, uncompressed data into a familiar LTO cartridge. Even with 2.5x compression, the current native capacity of an LTO 7 cartridge is 6TB. The highest-capacity enterprise cartridges store 15TB, a significantly higher storage capacity than spinning disk or flash storage. With backwardly compatible readers, old tape formats will sit alongside newer higher-density tapes, reducing the risk of data loss in a transfer between formats.

Waiting ten years for a new tape technology with a hefty storage upgrade could actually be a good match for the lifecycle of tape drives. Standard disk drives get replaced every three to five years, but tape drives are replaced every seven to ten years. Not only is tape “secure, reliable, energy efficient,” Cideciyan said, it is also significantly more reliable than most people think. “We’re finding it three to four times more reliable than hard drives,” he said.

The Future of Tape in the Data Center

So where does this technology fit into the data center? Cideciyan suggests, “there’s lots of innovation in tape storage; it’s experiencing a renaissance.” It’s not just the hardware that’s being improved, he says; so is the software and the management tooling. Part of that is the move to the Linear Tape File System (LTFS), a standard that uses a metadata partition with information about the files stored on a tape to make it look more like a hard drive and offers transfer rates similar to hard drives, as well as support for high-latency media in OpenStack. “It makes tape invisible to the user,” he says.

Clive Longbottom, Service Director at QuoCirca, is more cautious about the role of tape. “Tape has its place — but that ‘place’ is getting smaller. There are certain heavily regulated verticals where long-term tape storage is still mandated, but for a general business seeking a means of creating a backup-and-restore capability, tape is now too slow and unreliable.” Alternative storage architectures are popular. “Tiered disk with cloud backup is becoming far more affordable, and the RTO-RPO difference is far better than tape,” he said.

IBM’s research on improving how file systems operate – intended to develop ‘cognitive’ storage solutions that model users’ data needs, and store data appropriately – could fit into those architectures, though. This approach dynamically manages hot and cold data, from flash storage all the way down to tape. The research team is also working with massive scientific data sets, one of which will manage data from the world’s largest array of radio telescopes.

Longbottom also has concerns about the amount of data that you’re going to be storing on a single cartridge. “IBM’s announcement sounds good,” he said. “It now means that one-third of a petabyte can be stored on a cartridge. That’s a lot of data. A lot of data that is one full load of eggs in one very fragile basket. Any damage to the cartridge itself or to the tape means that you’d better have multiple copies in different places.”

In fact, IBM suggests that the very highest capacities of tape will be a better match for large-scale cold storage in cloud data centers – holding millions of photos uploaded to social networks like Facebook, or holding off-site backups for personal and business users – than for the economics of corporate on-premises data centers. The market for archive storage isn’t going away, and this new format from IBM and Sony should keep tape viable for quite some time.