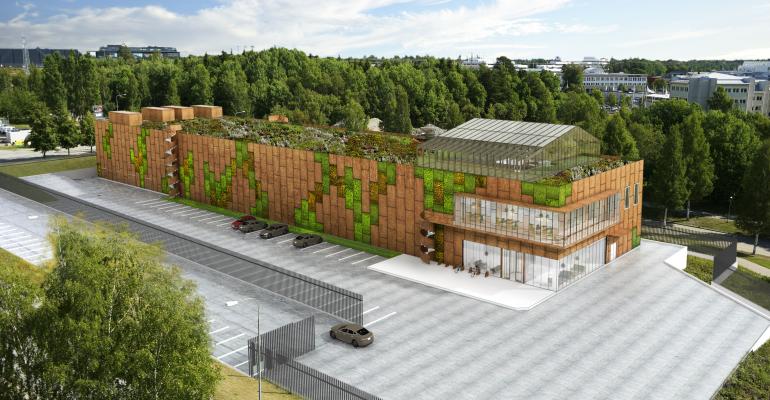 Modern data centers don’t need to be in the middle of nowhere. New approaches to cooling and to building architecture are making urban locations attractive, especially in countries where low-cost renewable energy is plentiful.

That’s the approach Multigrid is taking with its recently announced 5MW site in Stockholm’s new Data Park, in Kista Science City. We spoke to its CEO, Mattias Ganslandt, about the company’s approach to data center design and how it’s taking advantage of the city’s central heat infrastructure to significantly reduce power costs – dropping the cost of running the facility below what the Nordic region’s abundant hydro and wind power already deliver.

Related: How to Reuse Waste Heat from Data Centers Intelligently

The recently completed design uses the typical hot-aisle containment approach and circulates hot air through heat exchangers, but instead of using the cold outside air for cooling (as one would think any data center in the Nordics would), Multigrid wants to take advantage of the demand for comfort heating in homes and offices, using the heat exchangers to warm up water for the city’s district energy system. “The greatest advantage of the Nordics is not that the air is cold but that there is a high value on heating,” Ganslandt said. “That puts a value to something that would otherwise be a cost.”

The water cooling infrastructure is as fault-tolerant as the power system, which is connected to a high-voltage electrical grid delivering renewable energy. “We have four different heat pumps, with separate water systems to maintain availability,” Ganslandt explained. “Even if we lose one of the four, we still have the capacity to cool the data room. They’re connected serially to allow the production of heat, and we have emergency cooling in case the district energy system is not available [to absorb it].”

Related: Servers as Radiators: Can a Data Center Heat Stockholm?

Multigrid’s 5MW capacity for its new data center corresponds directly to its cooling capacity, supporting 7.5kW per rack, with higher capacity in individual cabinets if customers need that. Warm air from each hot aisle is circulated through a wall of heat exchangers, in an array two stories high. This creates very effective heat transfer from the air to the water; at 30C, the water is close to the right temperature for the city’s district heating system. Normally, the district heating system uses central heating plants to deliver heated water to homes and businesses, so adding the heat from Multigrid’s data center will also reduce the need for oil or gas-burning heating plants.

The 30C water coming out of the data center’s heat exchangers goes through large insulated underground pipes into the city central-heating pipes. Small surface area of the pipe, compared to the volume of water, means there’s little heat loss into the ground (Ganslandt estimates only 10 percent). It’s the opposite design to the usual cooling network, where an array of small pipes creates a large surface area to dump heat into the outside world, much like a home refrigerator.

Not every data center will be able to take advantage of an urban heat system; centralized heat systems are relatively rare, and where they are available they often are based on high-pressure steam. But Stockholm happens to be one of the rare places where this setup works. There’s also plenty of capacity in the city for more data centers like the one Multigrid is planning; with heat-sink capability of around 10TWh per year, and with cold winters and cool summers, demand for heat isn’t going to go away.

For Multigrid, this approach makes sense financially. Revenue from selling the heated water is a significant offset to electricity costs, and putting the data center in town gives it connectivity that might be hard to get for a rural site; they have access to five different dark-fiber providers and a direct link south, via Copenhagen, to the rest of Europe. Historical relationships with Germany and the straight road heading south mean the latency to Amsterdam and Frankfurt (both top European network interconnection hubs) is good.

This adds up to impressive savings. Multigrid is “able to reach a cost level for energy that’s quite low and, as far as we can tell, unmatched,” Ganslandt claims. A data center in Ashburn, Virginia, would pay 7c per KWh, he estimates. Multigrid’s total cost for energy is just 3 Euro cents per kWh, or 3.5 to 4c. “We’re almost half the cost of being in Data Center Alley.”

Multigrid expects the new data center to appeal to three types of customer. One will be an enterprise wanting to move much of its baseload compute to a private cloud as part of a hybrid cloud strategy, with capacity to burst into a hyper-scale public cloud. Ganslandt sees that as a good fit for the site’s low energy costs and good connectivity. But he also believes the location will make it attractive to the large cloud provider and other internet services company that wants to set up a local point of presence to extend the edge of its network for services like video streaming and gaming. The third type, in the longer term, may be a government organization looking for a low-cost way to consolidate its in-house data centers.

There’s a lot of data center innovation happening in the Nordic countries; power costs and innovative offset schemes like this are just one reason. “It helps to be in a country that’s built on the export of energy,” Ganslandt noted, suggesting that the data center industry is replacing older energy-intensive industries, in this case paper and steel mills. That heritage means much of the necessary infrastructure is in place, allowing companies like Multigrid to plug in and go – ready to turn data center waste energy into heat for 10,000 homes.