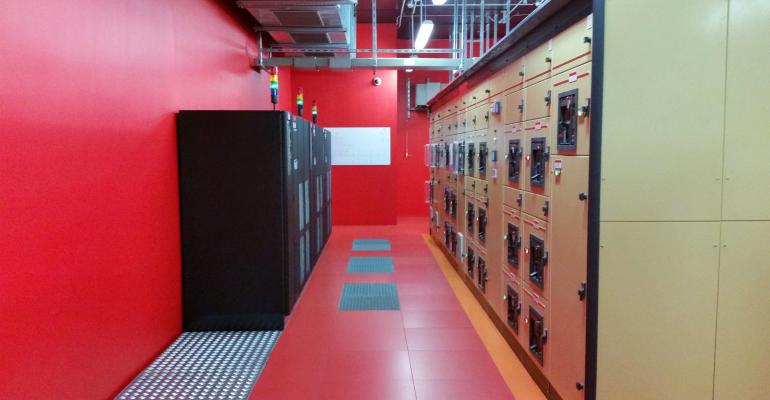 The market has shifted this decade as enterprises consolidate their data centers and move their applications and data to the cloud and colocation facilities, Lucas Beran, IHS Markit senior research analyst, said.

That trend led to decreased global UPS sales from 2011 to 2015, but the market bounced back in 2016, as hyper-scalers and large colocation providers have rapidly expanded their data center footprint to meet increased demand, he said. In fact, global UPS revenue rose 1.6 percent to $7.44 billion in 2016, and, according to preliminary IHS data, revenue increased about 3 percent in 2017.

The new market dynamics has forced UPS vendors to adapt. As customer requirements have changed, vendors have redesigned their UPS products and sped up their manufacturing processes to meet customer demand for faster delivery.

“Because customers are demanding only what they need when they need it and rapid scalability, that has forced us to basically build on-demand,” said Peter Panfil, Vertiv’s VP of global power. “Before, from the time an order was placed and shipped, it was five to eight weeks. Today, it’s as little as three days to as much as three weeks.”

Large cloud and colocation providers are boosting high-end UPS sales as they continue to expand and build gigantic data centers. The installed base of three-phase UPS systems with a power rating of more than 500 kVA grew 5 percent globally from 2016 to 2017, according to IHS.

High-end UPS products for large data centers will continue to be the fastest growing segment of the market, with 5 to 10 percent annual growth in the next few years, Beran said.

In contrast, continued data center consolidation by enterprises has resulted in reduced sales of UPS systems for small and medium-sized data centers. For UPS products in the 10.1 to 100 kVA range, which are used in server rooms, network closets and very small data centers, the global installed base fell 2 percent in 2017.

For UPS systems in the 101 to 500 kVA range, which are used in small and medium-sized data centers, the installed base in the Americas also dropped 2 percent in 2017.

The low end of the market is expected to rebound, however. UPS systems in the 10.1 to 100 kVA range will stabilize and grow in the coming years, as more enterprises adopt the hybrid cloud model and need smaller UPS for their remaining on-premises workloads, Beran said.

This part of the market will also grow as emerging applications that require edge computing capacity, such as autonomous vehicles, augmented reality and virtual reality take off, he said. Organizations will have to build small edge data centers to ensure good network performance for these applications.

“Edge applications are in their infancy, but because of latency, a lot of these applications need to be close to the end user,” he said.

Executives from UPS companies, however, say the low end of the UPS market has already stabilized and is growing. In fact, Schneider Electric is seeing 2 percent growth in North America in the 20 to 100 kVA range, as enterprises make further inroads into hybrid cloud, Steven Carlini, the company’s senior director of data center global solutions, said.

Many enterprises have moved what they can to the cloud and must keep the remaining mission critical applications in-house, such as legacy ERP and manufacturing applications that can’t be easily migrated to the cloud, he said.

With fewer internal workloads, these companies need to downsize to smaller in-house data centers with new IT infrastructure that includes new UPS systems for the smaller space, Carlini said.

Vendors Shake Up Their Strategy

The changes in the market has forced UPS vendors to lower their prices, but they hope to recoup revenue through maintenance contracts and improved service offerings, Beran said.

In fact, during the past four years, Schneider has deployed dedicated teams for hyper-scalers and large colocation providers.

“We have solutions architects and supply chain as part of the team,” Carlini said. “We also have a special service processes – a sort of VIP services – where (customers) have special numbers to call, and we have knowledgeable people who can pull up their accounts, and we can dispatch people right away if needed.”

Schneider collaborates with its large cloud customers to design new UPS products that meet their needs. In the future, Schneider expects cloud providers to increasingly build edge data centers to reduce application latency. As result the company has focused product development on both high- and low-end systems, Carlini said.

During the past three years, Vertiv revamped its entire product family. Historically, customers purchased a bigger UPS than they needed, so they could grow into it over time. Now, they want to incrementally increase capacity as demand increases. Adjusting to the trend, Vertiv has designed modular UPS systems that allow for that kind of scalability, Panfil said.

“(Customers) are squeezing their pennies hard,” he said. “They don’t want to spend their capex until they have to.”