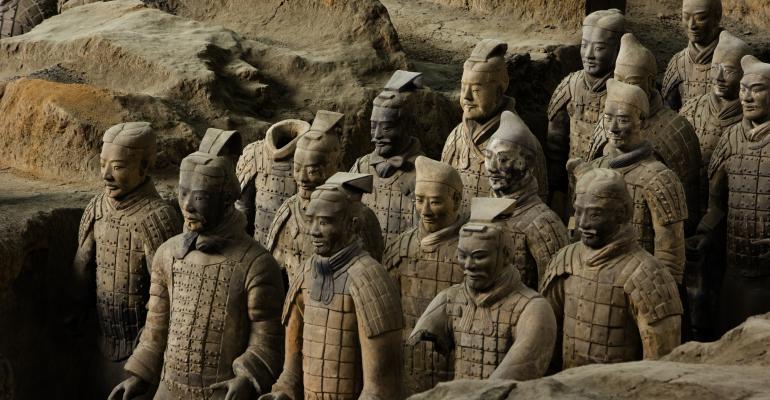 The facility in Xi’an, Northwest China, was divided into 232 modules, with the equipment prefabricated and preinstalled in a factory.

China Mobile has partnered with Huawei to create a modular data center in the historic Chinese city of Xi’an, in order to deal with an influx in mobile data caused by tourists.

Thanks to modular ‘LEGO-like’ construction, Huawei says it delivered a facility consisting of 938 cabinets in just six months.

Xi'an, located in Northwest China, served as the capital for much of ancient China. Sometimes known as Sian outside of China, the city is the starting point for the Silk Road and home to the famous Terracotta Army of Emperor Qin Shi Huang, as well as to the Daming Palace, and the Drum and Bell Tower of Xi'an.

The city is also home to research and manufacturing centers for semiconductors, aerospace and other high-tech industries, including Samsung and U.S. chipmaker Micron, accounting for just under 1% of China’s GDP, according to CNBC.

To help save time and reduce disruption on the new site in Xi'an, China Mobile chose to use modular data center components.

The data center was divided into 232 modules, with the equipment prefabricated and preinstalled in a factory.

After completing the initial preparation, the modules were assembled on location. This allowed engineers to complete the project in six months. Huawei said the modular approach also reduced construction waste and dust by 80%, and resulted in a material recovery rate exceeding 80%.

In comparison, an equivalent data center constructed traditionally would take eight months to construct, and 10 months would be required for equipment installation, commissioning, and acceptance, the company said.

In an attempt to reduce the data center’s carbon footprint, Huawei and China Mobile used indirect evaporative cooling “powered by artificial intelligence.” With a mean temperature of under 75 degrees F from September through May, the air compressor is needed only two months of the year, with the facility relying on natural cooling the rest of the time.

Where Huawei fits in the modular data center market