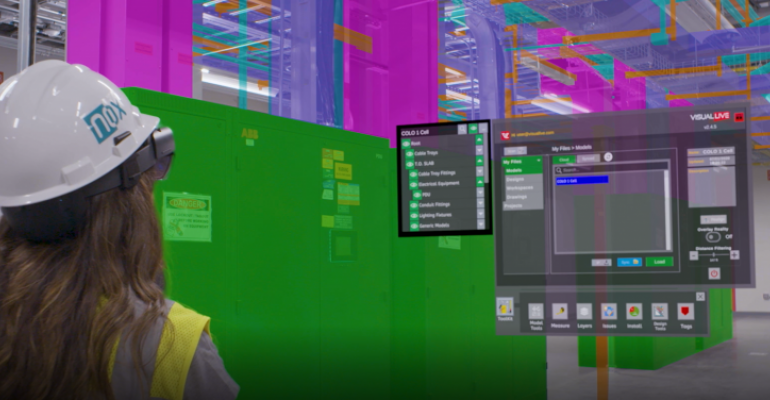 HoloLens-wearing teams can see 3D models of physical infrastructure overlaid as holograms on the physical space.

Microsoft is using its data center construction project in Arizona – to host a new Azure cloud availability region on the US West Coast – as a showcase for both the company’s new focus on water conservation and the power of its HoloLens augmented reality hardware in combination with Azure.

Along with rolling out publicly an aggressive goal to put more fresh water back into the regions where it operates than its operations consume by 2030, the company officially announced the upcoming cloud region. The data centers are being constructed in Goodyear, a Phoenix suburb, as AZ Central reported last year.

The software NOX uses is developed by a company called VisualLive. It enables an engineer to transform their CAD or BIM files into a 3D model. That model can then be overlaid on a physical space and viewed as a hologram through HoloLens glasses.

Based on a Microsoft video, a person can walk through an empty warehouse and see all the IT racks, cooling systems, and electrical equipment comprising the future data center in the context of the real-world, physical building envelope. The model can then be adjusted to fine-tune it to fit the space better.

The result, according to NOX, is a substantial reduction in time and resources spent in the design and construction process.

Even with 3D virtual design, the model may be perfect, but unforeseen hazards at the construction site or errors in fabrication and installation can create rework. “Using traditional construction processes, we had teams go onsite, install something, potentially clash with other trades, and then have to pull it out and redo it,” says Brian Pemberton, Director of Virtual Design and Construction at NOX Innovations. “The cost impact on rework is about three times the original cost to put it in correctly the first time.”

To reduce the massive facilities’ impact on the already strained water supply in the Phoenix metro Microsoft’s data centers will rely on adiabatic cooling. For about half the year, when outside air temperature is below 85F, the adiabatic system will ensure water-free cooling, the company’s engineers have estimated.

The data centers will use evaporative cooling for the rest of the year – similar in concept to residential “swamp coolers.”

Microsoft is also investing in a large solar energy generation project in Arizona. Fossil energy generation consumes a lot of water, and by displacing fossil energy on the local grid, the future Sun Streams 2 photovoltaic power plant is expected to save 356 million liters of water annually, according to Microsoft.

To deliver on its commitment of “water-negative” operations by 2030, Microsoft said it will invest in a wide range of water conservation efforts in the regions where it has offices and data centers.