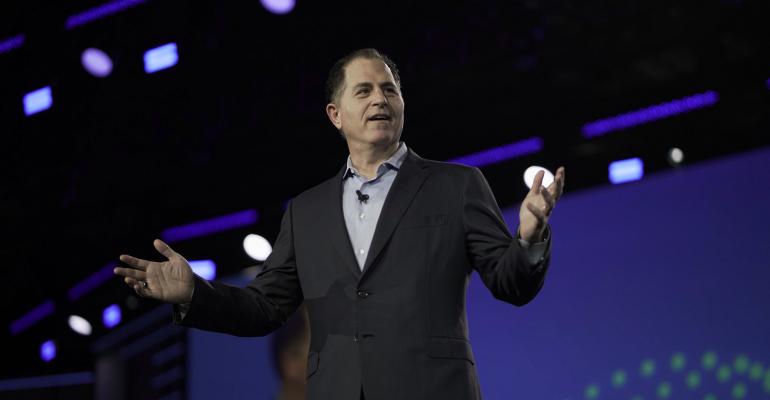 Dell Shares Up on PC-Driven Rosy Forecast, but Data Center Revenue Down

Second-quarter growth in corporate sales of desktops and laptops overcame weakness in the company's server and storage business.

Profit, excluding some items, will be $6.95 to $7.40 a share in the current fiscal year, executives of the Round Rock, Texas-based company said Thursday during a conference call. In February, Dell projected $6.05 to $6.70 a share for fiscal 2020. Analysts on average estimated $6.42 a share, according to data compiled by Bloomberg.

Chief Executive Officer Michael Dell has diversified his technology empire to make it a one-stop shop for large companies upgrading their hardware and software. That broad product lineup helped the company in the most recent period, when growth in corporate sales of desktops and laptops overcame weakness in Dell’s server and storage business. Competitors Hewlett Packard Enterprise Co. and NetApp Inc. both reported disappointing sales because of falling demand for data-center hardware.

“We’ve tried to position the company to be successful in any economic environment,” Tom Sweet, Dell’s chief financial officer, said in an interview. “While we think long technology-spending cycles hold up, what we have seen this year is a softening of demand in the server space.”

Dell reported revenue gained 2% to $23.4 billion in the fiscal second quarter. Earnings, excluding some items, were $2.15 a share in the period ended Aug. 2, the company said in a statement. Analysts, on average, projected profit of $1.50 a share on sales of $23.3 billion.

Shares jumped about 9% in extended trading after closing at $46.77 in New York. Dell’s stock has declined 4.3% this year.

Companies have been upgrading their personal computers to get Microsoft Corp.’s Windows 10 software, bolstering demand for Dell’s PCs. The company’s PC division grew 5.8% in the quarter, with commercial sales rising 12%.

Revenue from Dell’s data-center hardware fell 6.6% to $8.6 billion. While sales of storage hardware were little changed from the period a year earlier, server and networking gear revenue declined 12% -- a turnaround from last year, when the company saw unprecedented demand for the products.

Dell executives said on the call they expected IT spending to be “soft” throughout the rest of the fiscal year, particularly in China. And the company narrowed its annual revenue projection to $92.7 billion to $94.2 billion, from the February forecast of $93 billion to $96 billion.

“There is more macro uncertainty, whether it’s the trade environment, the Brexit environment, GDP growth in Europe, yield curves inverting,” Sweet said. “As a result of that, I think you do have some customers more cautious on capital spending.”