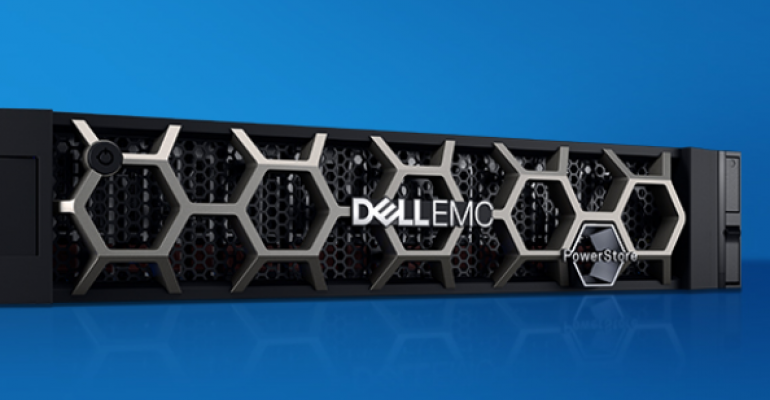 The new Dell EMC PowerStore arrays in some ways catch up technologically to rival solutions but also offer some new features that make them stand out, including the ability to run applications on the storage hardware itself and free upgrades.

The all-Flash array is also more efficient and easier to manage and deploy, according to the company. Through deduplication and compression, Dell said, it has improved data reduction ratio from 3:1 to 4:1, while a machine-learning engine helps enterprises automate labor-intensive processes, such as initial volume placement, data migrations, and load balancing, the company said.

“We wanted to help our customers transform their operations (by) adding more automation, simplicity, and more intelligence and agility into the infrastructure. When we looked at our own portfolio and in the market, there was nothing in the market. It required a brand new architecture and a brand new approach,” said Caitlin Gordon, Dell’s VP of product marketing in a media briefing last week.

Dell EMC Unity continues to be the company’s lead midrange hybrid product. Dell has not discontinued its other midrange storage products and will allow its customers to transition to PowerStore on their own time, she added.

The midrange is the largest and fastest growing segment of the enterprise storage market, said Eric Burgener, IDC’s research VP of infrastructure systems, platforms and technologies.

With the new release, Dell aims to continue its dominance in the storage market.

During the 2019 fourth quarter, Dell captured 27.6 percent of the $7.9 billion worldwide enterprise external OEM storage systems market, according to IDC. Hewlett Packard Enterprise ranks second with 10.1 percent, followed by IBM at 9.1 percent, and NetApp at 8.9 percent.

PowerStore helps Dell strategically in several areas, Burgener told DCK. The company has been in the midst of rebranding all its enterprise storage products with the “Power” moniker. IBM has done something similar by getting rid of its Storwize name and rebranding all its primary storage arrays as “FlashSystem” several months ago, he said.

“As they are doing this, Dell has anointed certain platforms as strategic to their customers and are putting other systems more into maintenance mode,” he said. “This evolution makes their portfolio easier for both customers and channel partners to understand.”

Moreover, with the release of PowerStore, Dell is providing native support of NVMe to the midrange of the market, which improves performance. That’s important competitively for Dell because competitors such as Hitachi, IBM, and Pure Storage have already done that, he said.

Dell has also introduced a capability called “AppsON,” in which a built-in VMware hypervisor will allow enterprises to run applications directly on PowerStore. It allows faster access to data and quicker response times.

Dell sees several use cases for AppsON: IT teams running anti-virus or data protection software or other data-intensive or latency-sensitive applications, such as real-time analytics, Gordon said.

The ability to run apps directly on storage hardware gives Dell a feature its rivals in the mid-range portion of the market don’t have, Burgener said.

“Think of it as an additional area of flexibility that Dell EMC has,” he said. “It’s not a traditional hyperconverged infrastructure system, but it brings some of those same benefits in terms of infrastructure consolidation.”

Another unique feature of PowerStore is a new “Anytime Upgrade” option in its Future-Proof Program, which allows enterprises to upgrade three ways. They can swap out first-generation controllers with second-generation controllers for free, or upgrade to a more high-end PowerStore model from the same generation of products, also for free. The third option is getting a discount toward a second storage appliance, Gordon said.

Major storage vendors offer upgrade and support programs. Pure Storage kicked it off with its Evergreen storage service several years ago – and rivals IBM, HPE, Dell, and Hitachi quickly followed suit with similar programs that offer guarantees, such as money back if customers are not completely satisfied, fixed maintenance, non-disruptive upgrades, and trade-in credits for technology refreshes, Burgener said. The Future-Proof Program was Dell response to Pure’s Evergreen offering.

The Anytime Upgrade option “does something nobody else has done in that area yet. They let you do a technology refresh for free at any time during the life of the array. That option really drives some value. Customers will like this,” Burgener said. “Other programs have a few more restrictions in terms of when you can upgrade and what you might have to pay to do it, depending on when you want to do it.”

Dell EMC PowerStore is available now. Customers can buy the storage array on its own. In the summer, it will be available as part of Dell’s PowerOne, an all-in-one system that allows enterprises to use Dell hardware on-premises through a cloud-like subscription model. For customers that want to deploy software-defined storage, Dell will also make PowerStore software available on standard off-the-shelf servers in the future, Gordon said.