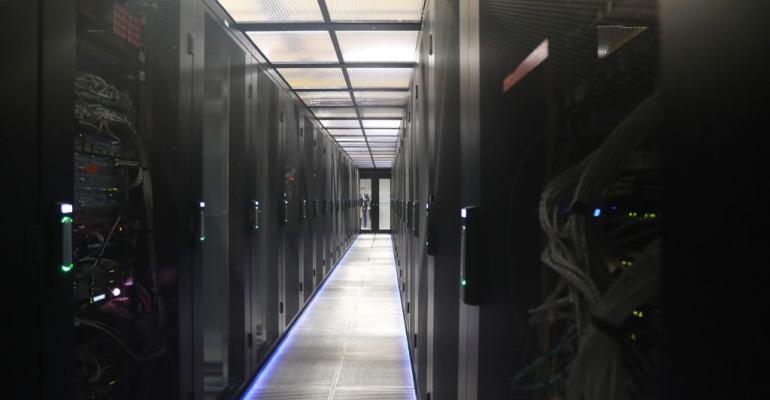 JACQUES DEMARTHON/AFP/Getty Images
A look down an aisle inside Equinix's PA8 data center in Pantin, a Paris suburb.
Business>Deals

Tons of Data Center Businesses on the Market. Not All Will Sell

There’s north of $5 billion worth of ­­data center assets in various stages of the sale process today. Or $25 billion. Or closer to $40 billion.

Which it is depends on how much value the assets get assigned if and when the deals close. A lot of “price discovery” has been taking place recently. Owners are trying to see how much investors are willing to pay for their businesses, and far from every potential deal floating around is certain to end in a hand-shake.

Kelly Morgan, who tracks the market at 451 Research, pegged the total value of deals as of September at $5.4 billion. The number of deals is about the same it was in September of last year, but the deals are much smaller, she said in a presentation at the research firm’s Hosting and Cloud Transformation Summit in Las Vegas last month.

Total deal value this time last year? $12.5 billion, according to Morgan. But one banker who advises buyers and sellers in the space said 451’s total-value estimate was too low. It’s twice Morgan’s estimate for last year, if not three times larger, Horace Zona, a managing director at SunTrust Robinson Humphrey, told DCK. Morgan later admitted that Zona was likely right, considering all the big asset packages currently on the market.

Tracking M&A activity in the data center space – or any space – is not easy. Blind spots abound. Aside from the rare leak to the press, deal discussions take place away from the public eye. Additionally, no company is too big to be approached with an offer, and a single approach can throw any total-market estimate off by a lot. The biggest players in the market are publicly traded data center REITs. If an offer is lobbed at one of them, management is obligated to evaluate it.

Since Morgan presented her numbers in Las Vegas, news of both EdgeConneX and Interxion having been approached leaked, and Equinix announced an agreement to buy three data centers from a Mexican telco. Interxion alone has enterprise value of nearly $6 billion.

CyrusOne was similarly approached earlier this year. “There’s a lot of that going on,” Zona said. “There’s a bunch of stuff happening that’s not necessarily apparent to everybody.”

The deals floating around include every type of a data center services business, from wholesale to retail colocation to managed services. Zona put CyrusOne in the “hybrid wholesale hyperscale” category. The EdgeConneX portfolio consists of a mix of secondary-market content caching colocation data centers, hyperscale facilities housing Microsoft Azure infrastructure, and small edge computing sites. TierPoint, which has been looking for some fresh investment since at least May, is of the managed-services variety. Its competitor Cologix in September raised $500 million from Mubadala Investment Company, the Abu Dhabi sovereign wealth fund.

Multiple trends happening simultaneously explain the recent spike in M&A activity in this high-growth space, Zona said. Some publicly traded giants have been making more frequent strategic acquisitions; many private businesses have grown to a point where their investors are looking to cash out; and growing interest in the space by infrastructure funds, pension funds, and sovereign wealth funds has greatly expanded the pool of capital available to private data center businesses, traditionally funded by private equity firms.

That last one is especially transformative. Institutions that typically look for long-term investments and are willing to accept lower and not immediate returns in exchange for low risk are increasingly realizing that data centers tick all the right boxes. For example, a fund used to investing in toll roads, airports, and power plants now recognizes that a data center housing servers for one of the world’s largest cloud providers is critical infrastructure that’s here to stay – not an esoteric and volatile real estate business.

Morgan’s team at 451 was tracking 128 potential deals as of September, and the number today is likely higher. One reason we haven’t seen many of them close is the inability of owners and buyers to come together on price. “There’s a very big ask there [by owners] at the end of the day,” Zona said.

It’s common nowadays for an owner to base their valuation not only on revenue coming in from customer infrastructure already running in their facilities but also on future revenue from customer contracts they signed but haven’t yet commenced. Some owners have been audacious enough to bake in expected revenue from data center capacity “reserved” by customers without a contractual obligation to ever occupy and pay for it, according to an in­­­­­­­du­stry source who wished to remain anonymous.

Not every owner out there is being overly optimistic about the value of their business, and chances are many of the ongoing processes will end in deals of some sort. Some will be acquisitions; some may end in sales of substantial minority stakes; some will be traditional private equity deals.

The combination of high growth and investor interest in the business, recent high-multiple strategic acquisitions by public players, and an increase in multiples at which many of the public players have been trading has resulted in asset value inching up across the sector. A buyer may not be willing to pay for an asset at an outrageous valuation, but they are willing to pay more than they were three or four years ago.