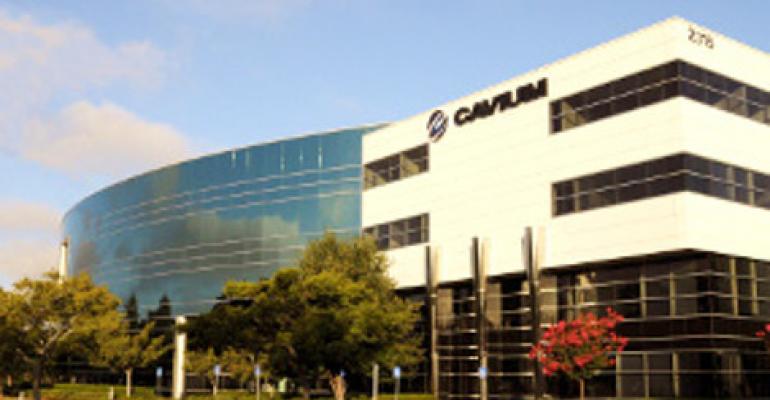 Marvell to Buy Rival Chipmaker Cavium for About $6 Billion

Company is recovering after founders were pushed out; acquisition is latest consolidation in semiconductor market

Ian King and Ed Hammond (Bloomberg) -- Marvell Technology Group Ltd., a chipmaker looking to build itself a future outside of a declining area of the market, has agreed to buy Cavium Inc. for about $6 billion.

The buyer will pay $40 in cash plus 2.1757 Marvell common shares for each Cavium share, according to a statement Monday. Marvell plans to use $1.75 billion in debt financing to fund the transaction. Cavium shares rose to a record Monday, while Marvell also gained.

Marvell’s main business is in chips that control hard disk drives, a market that’s no longer growing as new technology begins to take over data storage. Cavium makes networking processors and is one of several companies trying to use ARM Holdings Plc technology to break into the server microprocessor market. It’s an ambitious move because Intel Corp., the world’s largest chipmaker, dominates the sector with a 99 percent share.

The deal was expensive but necessary to help both companies compete with the giants of the semiconductor industry, including Intel, Qualcomm Inc. and Broadcom Ltd., Kevin Cassidy, an analyst with Stifel Nicolaus & Co., said in a note. Cost savings could add 10 percent to the combined company’s annual profit, he said.

The acquisition of San Jose, California-based Cavium is the biggest deal for Marvell Chief Executive Officer Matthew J. Murphy, who took the role last year after an accounting scandal forced the resignation of his predecessor. “This is an exciting combination of two very complementary companies that together equal more than the sum of their parts,” Murphy said in a statement. Marvell is based in Bermuda and run from Santa Clara, California.

Cavium shareholders are expected to own about 25 percent of the combined company on a pro forma basis. Syed Ali, co-founder and chief executive officer of Cavium, will join the board of Marvell, with fellow co-founder Raghib Hussain and engineering executive Anil Jain rounding out the Marvell leadership team. Marvell’s Murphy will head up the new company.

The deal is yet another move toward consolidating the $300-billion semiconductor industry. Chipmakers have combined at a record pace over the last two years trying to gain scale to better cope with rising costs and a shrinking customer list. In the biggest proposed deal so far, Broadcom Ltd. has offered to buy Qualcomm Inc. for more than $100 billion.

Marvell is trying to remake itself after a corporate scandal. In 2015 the company launched an internal investigation into its accounting practices and concluded that some revenue had been recognized prematurely. The probe also discovered that top management was pressuring sales and financial staff to meet revenue targets and failed to raise concerns about former CEO Sehat Sutardja’s assertion of personal ownership of patents.

During the investigation, Starboard Value LP took a stake in Marvell and pushed for management changes and divestments, and in April 2016 Sutardja and his wife, President Weili Dai, who founded the company in 1995, stepped down.

Starboard still holds a 6.8 percent stake, and shares of Marvell have jumped 46 percent this year through Friday, giving the company a market value of about $10 billion. Cavium shares have gained 21 percent in that time. Marvell’s customers include Western Digital Corp., Toshiba Corp. and Samsung Electronics Co., according to Bloomberg supply chain analysis.

Marvell has obtained a $850 million bridge loan commitment and a $900 million committed term loan from Goldman Sachs Group Inc. and Bank of America Corp. The deal is expected to close in mid-2018.