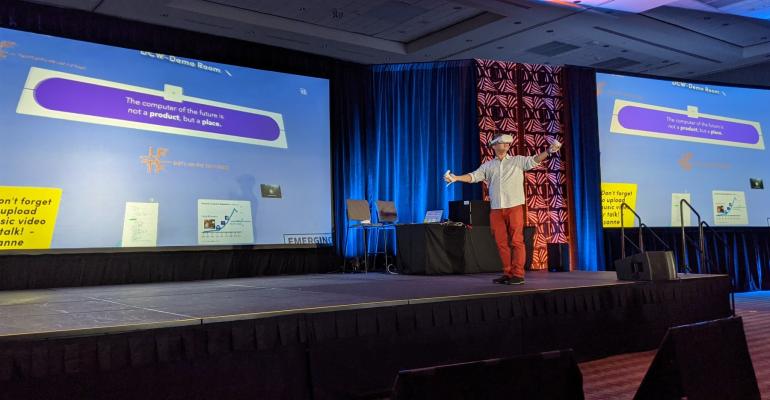 Yevgeniy Sverdlik
Toshi Anders Hoo, director of the Emerging Media Lab at the Institute for the Future, making a live VR demo in a keynote at Data Center World 2021 in Orlando, Florida.
Data Center World

A live demo at the conference offered a peek into what creative and office work may look and feel like in a not-too-distant future.

If the vision of the future that Toshi Hoo presented in his opening Data Center World keynote Tuesday in Orlando becomes reality, there's a massive amount of virtual, augmented, and other reality workloads headed for the world's data centers.

"One of the futures that we're really interested in, where the paradigm shifts are just beginning to happen, is the beginning of what we call 'experiential communication platforms,'" Hoo, director of the Institute for the Future's Emerging Media Lab, said in his presentation, titled The Future of Embodied Computing.

Founded in the 1960s as a spin-off from the RAND Corporation, IFTF is a non-profit think tank that helps government agencies, foundations, and big companies think strategically about the future beyond "beyond the most typical planning horizons." It tries to look anywhere from 10 to 30 years ahead. The lab Hoo leads researches "the future of human connection, collaboration, and communication," he said.

While the concept of VR has been with us for decades, only recently have the market and technology progressed enough to make VR and its close cousins widely accessible. There's now a strong push, including by deep-pocketted giants like Facebook, to create a virtual world anybody can participate in and interact inside of for entertainment, commerce, and work.

Facebook sees so much opportunity in this space that it "recently announced that they're no longer a social media company, they're a metaverse company," Hoo pointed out. "They're making massive billion-dollar, multibillion-dollar investments in this future of the metaverse."

Just this morning, the company unveiled Horizon Workrooms, a virtual space where multiple people can work together, available as an open beta app for its Oculus Quest VR headset.

The gradient between being in the real world and being fully immersed in a virtual world is referred to as "mixed reality spectrum," or XR.

Hoo's lab concerns itself with the potential to use these technologies for more things than gaming -- anything from virtual corporate meetings to training first responders.

Hoo's keynote included live demonstrations of a composer playing otherworldly 3D instruments while inside VR, a visual artist creating an entire world from scratch while on stage, and an entire work meeting between Hoo and several colleagues, located in different parts of the world. As human-looking avatars, they interacted inside a virtual office, held video calls, shared images and videos, and created virtual Post-it notes -- it was easy to see how this might be the Zoom meeting of the future -- before transfering together to a beautiful evening in the woods, where they danced around a fire together with Spider-Man, Groot, and a Storm Trooper.

According to Hoo, there are three major obstacles that need to be overcome before this vision of the future can scale.

They are content creation ("We know content is king [and] we need to be able to make user-generated content."); social connectivity ("We expect our computing systems to be social."); and interoperability ("Is it going to be an open or closed ecosystem?").

Similar to mobile apps, different VR and AR apps are created for specific hardware today and have to be purchased through vendor-specific app stores. "The problem there is that these are siloed experiences. They have siloed worlds," Hoo said. "You can't link from one to another." If metaverse is to become a reality, there will have to be a much more open ecosystem.

-- Yevgeniy Sverdlik contributed to this report.