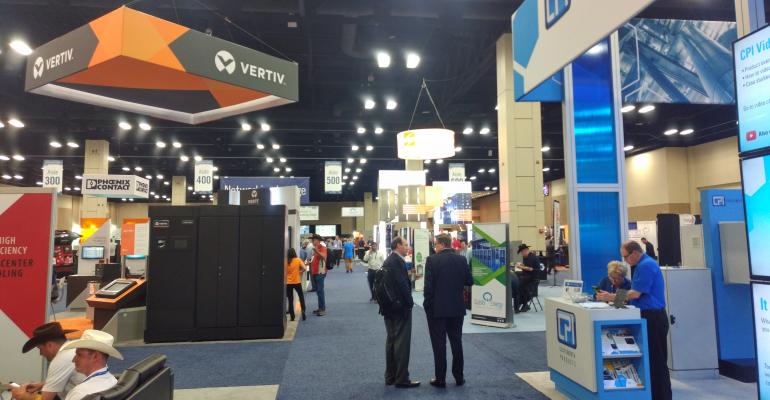 Many companies that exhibited at Data Center World announced new products to the 1,600 attendees of the conference in San Antonio.

The Exhibit Hall opened on Wednesday at Data Center World with many of the 161 industry-leading companies announcing new products, services, or findings. Here they are:

Atlas Oil has unveiled its new Stormproof campaign focused on emergency preparedness as well as an innovative emergency fueling response truck. The Atlas emergency fueling response truck is a byproduct of the lessons learned by Atlas’ emergency fueling team during their 2017 hurricane relief efforts.  Atlas deployed more than 80 trucks to Hurricanes Harvey, Irma, Nate, and Maria relief efforts. To date, Atlas still has assets deployed in Puerto Rico for utility companies working to restore power to the island. The new emergency fueling truck boasts a lift kit and upgraded tires for increased traction and clearance, while heavy-duty bumpers equipped with a winch can clear debris or pull the truck through treacherous conditions. It delivers up to 1,000 gallons of fuel with a split tank design that can carry both gasoline and diesel.

Cable-solutions provider CABLExpress® knows that one major challenge many data center managers face is dealing with polarity, also known as light path. Polarity is the position the fiber strands in the channel to ensure transmitted data is properly received. As a result, the company has developed a new system that data center managers can use to handle multiple cabling light paths with little disruption or added cost. The new multi-path™ system from simplifies the cabling migration process and reduces the need for multiple transition components.

Data center industry veteran Capitol Power Group has rebranded as CPG to better define their role as a cutting-edge data center and cloud solutions partner. Long known as a significant provider of electrical infrastructure covering the Mid-Atlantic, CPG has undergone significant expansion over the past 24 months and has become the innovator responsible for re-defining the standard in Data Center and IT Infrastructure solutions.   And, with projects supported across the United States, CPG has now expanded internationally, including projects in Tokyo, London and Kuwait.

Eltek, Inc., a leader in high-efficiency power electronics and energy conversion announced its Dynamic Pod system, designed to support a 150KW nominal IT rack deployment for data centers. Eltek’s Dynamic Pod is an innovative solution that provides complete environmental infrastructure enabling enterprises and service providers to build out conditioned and unconditioned compute facilities with speed and flexibility. The Eltek Pod features an innovative design and pre-engineered configurations that integrate power, cooling, cabling, software management, containment, and IT racks. The water cooling design in the high-density rack is based on a 99 percent heat exchange efficiency, which offers lower operating costs.

Grace Engineered Products, Inc. is announcing the GraceSense™ Hot Spot Monitor (HSM); a continuous temperature monitoring device intended for locations that are difficult and hazardous to access. The HSM utilizes patented fiber optic technology to provide continuous temperature data from nine or eighteen independent sources (depending on the HSM model). The non-conductive fiber probes can be mounted onto electrical busbars, splices, disconnects, cable connections, or any sources of heat. The HSM provides a unique combination of non-conductive fiber optic technology with advanced algorithms. Simply attach the fiber probes to a ring-style connector that securely bolts onto heat surfaces such as busbars while the other end connects to the HSM. Potential Failure Points (PFPs) may include inaccessible equipment and blind spots to infrared (IR) thermography.

This first-time exhibitor and server and component distributor in Southern California, IT Creations, Creations has made a name for itself by fulfilling the supply holes left by traditional distributors and VARs. With 10 years of experience, $74 million in annual revenue, and over 25,000 clients, they are still little known. According to the company, this is the first step of many to establish themselves as the trusted and most reliable source of both new and refurbished parts and servers. IT Creations supplies customizable servers, workstations, and parts that range from latest gen to EOL. On hand product and same-day shipping makes them the top choice for critical requirements. As a well-respected mission critical hardware asset, IT Creations plans to expand their reach, assisting those who need updated servers and parts, those who find themselves in crisis, and those who require the latest information within the market.

Munters is launching a new cooling technology. SyCool® ITC, Indirect ThermoSyphon Cooling, which provides an efficient cooling solution for new and existing data centers where access to a suitable water supply may be limited, expensive or unreliable. Designed specifically for data centers and driven by industry demand, SyCool ITC (patent pending) uses the waste heat from the data center and a combination of gravity and a syphon effect, to drive a refrigeration cycle capable of operating without pumps or compressors. Initially launched as a packaged Air Handling Unit (AHU) system, subsequent versions of SyCool will include in-room “Split Systems”, such as above-aisle modules and perimeter CRAH units, providing scalable cooling for new build and retrofit applications.  With zero water required, SyCool ITC also eliminates the potential risk of contamination from air pollutants, as there is no outside air gaining access to the data hall.

Also exhibiting for the first time at Data Center World, Wallace Perimeter Security is introducing the PDXT SpeedGate, the most robust and adaptable bi-folding vehicle gate available.The PDXT Series SpeedGate offers maximum security by securing the drive motor inside the column. It can open or close 23’ in 7 seconds. With the capability to customize infill, anti-climb and access control, this gate will optimize your perimeter security. Wallace Perimeter Security is a manufacturer of high-security gate systems and welded wire fencing. The company has over 800 gate systems operating across North America.

Based in Portland, Oregon ZincFive, Inc., a leader in nickel-zinc based energy storage and delivery solutions, introduced the ZincFive UPS for mission critical IT. The latest in its line of proven nickel-zinc battery-based UPS solutions, this UPS represents a shift in power protection deployment through new benchmarks for performance, safety and simplicity in data center operation.

With the ZincFive UPS, performance is redefined through a scalable and modular system offering a 6kW to 48kW, 3 phase, power-dense, lightweight, small footprint building block design with capacity upgrades in 6kW increments. The ZincFive UPS sets a new standard for safety with non-volatile nickel-zinc batteries that are less hazardous and more powerful than lead-acid, safer than lithium-ion, environmentally friendly and, combined with CE+T Power’s inverters, enables the industry’s only touch-safe system design in an industrial grade UPS.

With this UPS, Nickel-zinc battery life equals UPS system life, a huge breakthrough for UPS reliability and simplicity in operation and maintenance. ZincFive’s nickel-zinc batteries eliminate the typical three battery replacement cycles for lead-acid battery-based UPS systems during the system lifespan. It enables a distributed deployment model with a compact, power-dense, lightweight system that empowers customers to place the UPS closer to the load. The scalable and modular system design enables strategic use of capital to purchase power protection only in the amount needed on a just-in-time basis. This provides flexible deployment options and timing for customers to better manage and plan their power protection assets.