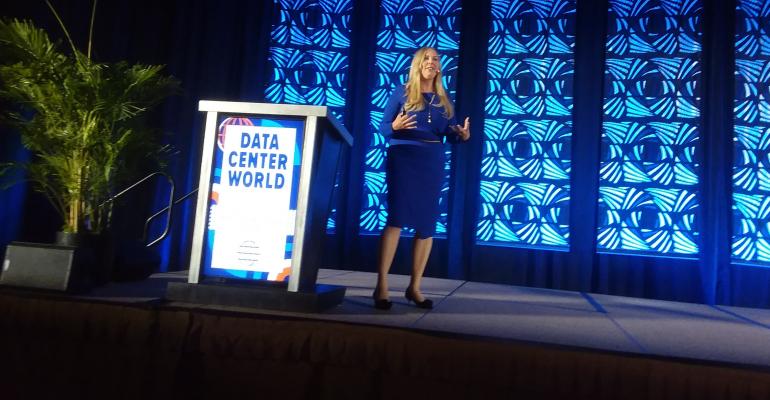 Data Center World: The Unintended Consequences of the Data Revolution

The generations that have grown up never knowing a world without internet are in many ways leaving tradition behind.

Anybody who spends time in data centers, surrounded by hundreds or thousands of servers, understands that data technology has changed the world, with more changes coming daily. Trouble is, according to Julie Albright, a digital sociologist at the University of Southern California who gave Thursday's keynote address at Data Center World in Phoenix, not all of these changes are positive.

In a talk that centered around her soon to be released book, "Left to Their Own Devices: How Digital Natives Are Reshaping the American Dream," Albright reminded the audience that with all of its benefits, the digital revolution comes with some unintended consequences.

"I just want you to know that I'm not trying to be Amish," she said. "I'm not trying to go back to the buggies and things like that, but I think that some of the unintended consequences are starting to show up now, and that's what I've been spending some time looking at."

Her concerns center around the widespread effects that connectivity is having on thirtysomethings and the generations that have followed, who are leaving traditional life choices behind in order to take advantage of the digital age.

"We call those digital natives," she said. "They grew up in a world where there always was an internet. Why does that matter? It matters because it reshapes their orientation to the world. That digital infrastructure is interwoven into their own behaviors, their values, their relationships. What they're doing is they're reorienting their lives to optimize for their devices, for texting, for social media."

In fact, she said, connectivity has become so important that a third of college students say that the internet is as important as food, water, and air.

In other words, these digital natives ("untethered" she calls them) are approaching life with a perspective that's radically different from previous generations. Where "work/life balance" used to mean finding time for family, now it means finding time for "fun."

While most of the differences she mentioned focused on purely social issues, such as online dating and lifestyle choices, there were some that dealt with how these younger generations are approaching work and career in ways that are changing the shape of the work environment. Three out of five of today's students say that people have a right -- not a choice -- to work remotely, for example, and seven out of ten say that an office is unnecessary.

"Companies don't know how to handle this yet," she added, pointing out that tech companies have been inconsistent in their approaches. IBM, a pioneer of remote working, for instance, recently decided that all of its remote employees must now work in company offices or lose their jobs. On the other hand, WordPress recently sold its headquarters building and now has an all-remote policy.

She also noted that as more jobs are being lost to AI and automation, the new jobs that are replacing them require a level of training and education that many entering the workforce don't have.

"The retired president and chief executive of Siemens USA said people on the plant floor need to be much more skilled than they were in the past," she said. "He says there are no jobs for high school graduates at Siemens today."