DCK Investor Edge: No signs of cloud leasing picking back up in second half, but long-term drivers still intact.

If you read DCK on a regular basis – and especially this column – you’re well aware of the “lumpiness” of hyperscale leasing for wholesale data center providers. In the past, a better way to evaluate new bookings versus company annual guidance has been to consider leasing during the trailing four quarters, which tends to smooth out the peaks and valleys. However, the unprecedentedly massive wholesale data center space absorption reported in Northern Virginia during 2017 and 2018 might have altered this rule of thumb.

Back in January, many data center executives predicted a hiatus in US hyperscale leasing for the first six months of the year, with hope there would be a resumption during the second half. Now that the first half is in the books, will large-scale wholesale leasing pick up as predicted?

What's Hot and What's Not

So far, there is little evidence of the prediction coming true.

Speaking with DCK last month, CyrusOne CEO Gary Wojtaszek said there appeared to be a lack of urgency for hyperscale cloud and Software-as-a-Service providers to sign leases for additional space in the top US markets, Northern Virginia being the largest of them all.

Related: Data Center REITs Soar Back After a Bruising 2018

“There had been a lot of discussion that the second half of 2019 would see an uptick in bookings earlier in the year,” he said. “However, it doesn't seem to be panning out after the record leasing in 2018, especially in Northern Virginia."

Wojtaszek said he strongly believes the long-term demand drivers have not changed. For now, the global cloud giants are still digesting the record amount of space they leased last year. Conversely, “there was a lot of demand in Europe – almost all from US hyperscale customers – across Frankfurt, London, Amsterdam, and Dublin.”

In a typical quarter, hyperscale bookings account for just over 60 percent of CyrusOne’s leasing measured by annual revenue, with the balance being a mix of new and existing enterprise logos, interconnection, and services.

Wojtaszek and his team’s decisions to expand into Europe two years ago and invest in GDS Holdings in China and ODATA in Latin America have resulted in some short-term pain necessary to fund long-term gain.

Wojtaszek summed up the situation for analysts on the first-quarter earnings call in May: “I recognize that our strategic decision to organically expand internationally has contributed to a significant level of capital investment over the past two years, which has resulted in muted FFO per share growth.”

The European expansion via acquisition of the Zenium data center platform in London and Frankfurt, as well as greenfield development in Amsterdam and Dublin, has already begun to pay off for shareholders. 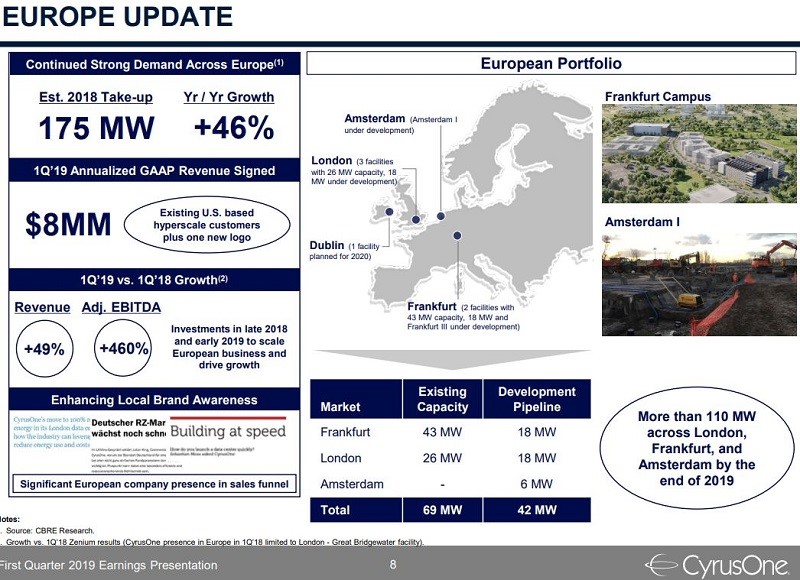 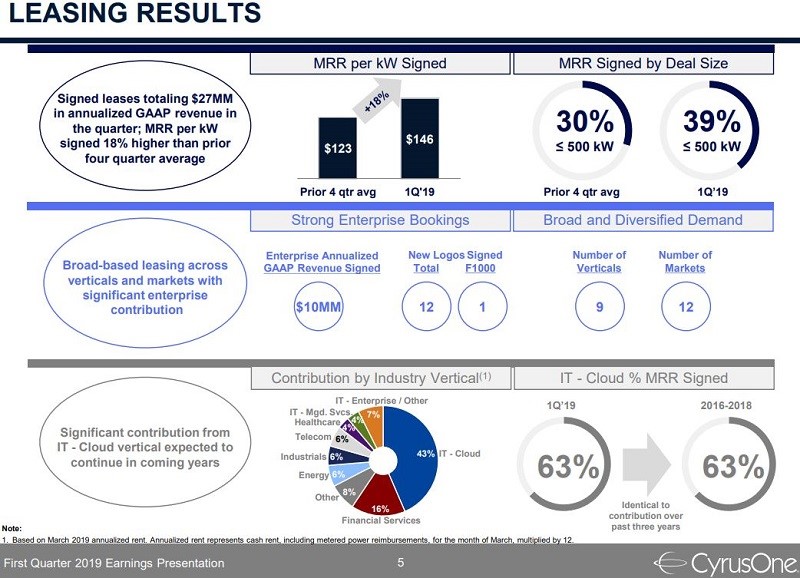 Enterprise deployments accounted for another $10 million, or just under 40 percent of quarterly bookings. Notably, these smaller deals (less than 500kW) generate higher monthly recurring revenue than the large hyperscale leases. The CyrusOne leasing mix last quarter generated 18 percent higher revenues compared to the same period last year. A strong bookings quarter on the enterprise side could help to make up for some of the anticipated hyperscale shortfall.

Historically, CyrusOne has been able to punch above its weight by signing a disproportionately large amount of hyperscale bookings compared to the size of its existing data center portfolio. As of March 31, about 40 percent of its annual revenue had been generated from hyperscale customers, with the balance derived from a diversified mix of industries.

A major concern noted by multiple industry analysts is just how large the hyperscale leasing pie will be this year, especially in the top-tier Northern Virginia, Chicago, and Dallas, but also Phoenix, which has emerged as a primary destination for large deployments near West Coast (a market CyrusOne entered several years ago). Keep in mind that strong demand from one or two hyperscalers can quickly shift the dynamics in any given market. Additionally, a single large lease signed in a quarter can significantly change the narrative for a company of CyrusOne’s size.

Wojtaszek did voice some concerns to us regarding some US tier-one data center market supply-demand fundamentals. Supply in some markets has partly been driven up by nascent private equity and infrastructure fund-backed players deploying large sums of capital in hopes of cashing in on the long-term trends driving the digital economy.

This quarter, however, it is the demand side of the hyperscale leasing equation that’s front and center for data center investors. CyrusOne is reporting its second-quarter results this Thursday. It will be the last of the data center REITs to report, so any weakness in bookings or earnings misses reported by its peers could depress its share price prior to earnings. Short-term price fluctuations can create an opportunity for long-term investors looking for an attractive entry point or to add to an existing position.