DCK Investor Edge: With 2019 development funded, the REIT has a clear pathway to cover builds in 2020 and beyond.

REIT investors normally like to see a steady growth in funds from operations (FFO) per share to fund a growing dividend. FFO is roughly a REIT equivalent of earnings per share.

Last year, CyrusOne management chose a road less traveled, making a conscious decision to pursue an expansion strategy that would result in just the opposite – declining FFO per share and a stagnant dividend for six quarters.

Related: Data Center REITs Soar Back After a Bruising 2018

Here is how this counter-intuitive strategy has now paid off handsomely for investors.

Tale of the Tape

During the past 52 weeks, CyrusOne shares have traded in a range of $48.94 - $69.01 per share. After CyrusOne reported Q4 2018 results, Mr. Market sold off CONE shares in late February on concerns including a slowdown in hyperscale bookings, a decline in earnings (FFO) per share, and a stagnant dividend. 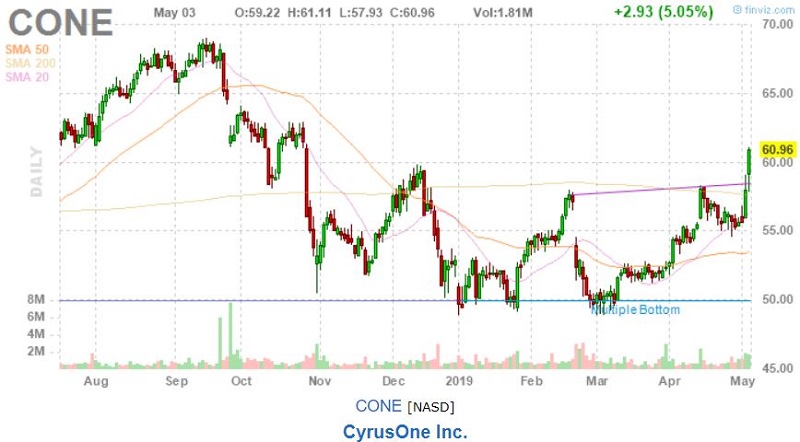 CyrusOne reported first-quarter 2019 earnings after the bell on Wednesday May 1 and hosted its quarterly earnings call the next day. 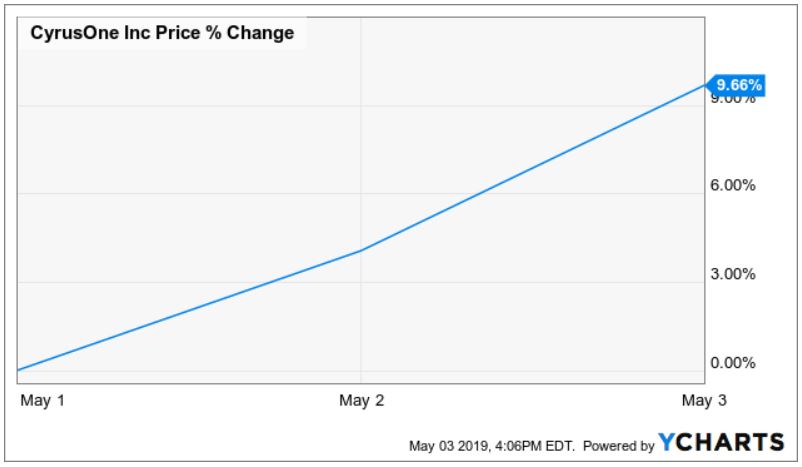 Essentially, CyrusOne has been rewarded for strengthening its balance sheet while fully funding a long-term global vison.

This quarter, CyrusOne revealed it had bolstered its balance sheet by harvesting $200 million of unrealized capital gains in its GDS Holdings shares and utilized its at the market (ATM) shelf offering to raise another $252 million. GDS is the largest data center provider in China, with all major hyperscale cloud providers as its customers. CyrusOne bought a modest, $100 million stake in GDS in 2017.

On last week’s earnings call management explained that the combination had raised sufficient capital to fund full-year 2019 development projects in the US and Europe. No need for an institutional JV partner. No need for asset sales. No need to raise additional equity to fund a budgeted $750 million per year development program in 2020 and beyond.

During the call, CyrusOne CEO Gary Wojtaszek said that monetizing the partial stake in Shanghai-based GDS was bitter-sweet because of future price appreciation expected from the rapid growth of GDS's data center platform located in top-tier Chinese markets.

Approximately 18 months ago, CyrusOne decided to expand into Asia with its GDS investment; expand into Europe by acquiring the Zenium platform (London and Frankfurt), funding ground-up developments in Frankfurt and Dublin; and into Latin America by making a small investment in Brazil-based ODATA – a platform that can serve CyrusOne customers interested in expanding in the region.

Meanwhile, the torrid pace of hyperscale leasing during the first half of 2018 resulted in CyrusOne needing to build powered shells in its core US data center markets to create inventory for hyperscale customer expansions and deliver data halls that had been pre-leased already.

It can take several years before utilization (and operating leverage) of a data center campus to mature and deliver double-digit returns for shareholders. 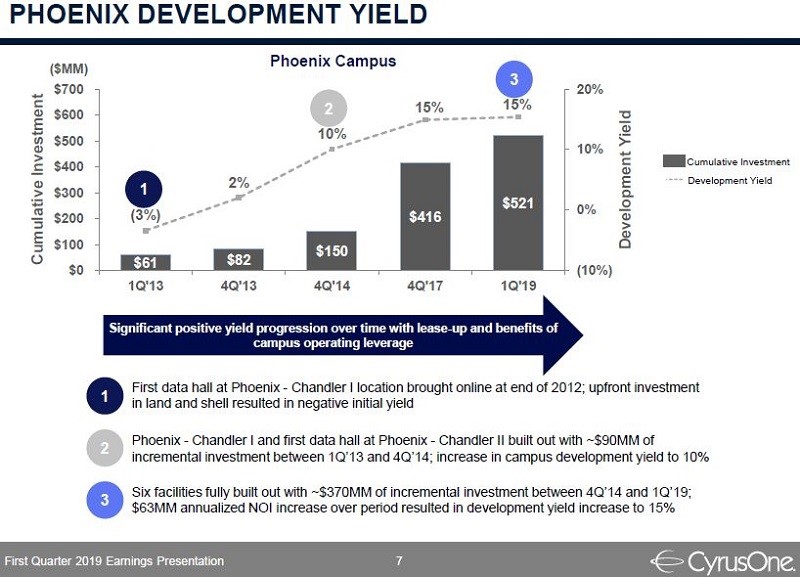 These massive data center investments require a strategic vision and willingness to allocate capital today in order to harvest substantial returns in the future.

Back in February, it was not entirely clear how CyrusOne would fund both initiatives. My Investor Edge takeaways at the time included these observations:

"During the past year CyrusOne has been strategically expanding into four European markets to build wholesale data centers. On the earnings call, management confirmed that $400 million of Capex will be spent on developing new campuses in 2019. Silicon Valley is its latest new market in the US. The company’s plan is to build the largest campus in Santa Clara (144MW). Last year, it also announced Atlanta for a new ground-up development project.”

“I am somewhat puzzled that so many Wall Street analysts thought CyrusOne would be able to invest in GDS Holdings (China) and ODATA (Brazil), purchase the Zenium platform in Europe and additional land, expand into new markets in the US and build massive powered shells in existing Tier I markets in Northern Virginia, Phoenix, and Texas – while growing FFO per share."

Meanwhile, CyrusOne's $100 million investment in GDS has nearly tripled over 18 months. These unrealized gains were the ace-in-the-hole Wojtaszek played this quarter while still retaining over $90 million in GDS shares, and his seat on the GDS board of directors.

Wojtaszek and his team were willing to endure the proverbial "slings and arrows of Wall Street analysts" in order to position $6.4 billion-market cap CyrusOne as the third largest US-based global data center REIT. The company joins an exclusive club alongside industry leaders Digital Realty and Equinix, both S&P 500 members, with market capitalization of $25.4 billion and $39.2 billion, respectively.

CyrusOne shareholders who stayed the course have been rewarded handsomely last week by the announcement that strategic global expansions and domestic data center development programs are now fully funded.