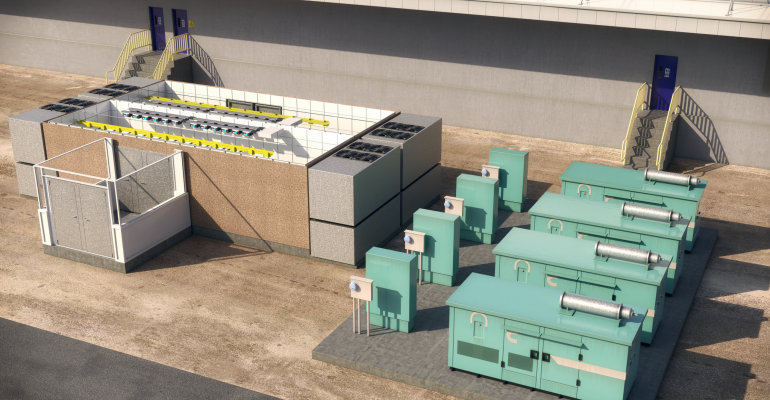 Compass Gets Into the Edge Computing Business With Two Acquisitions

Compass Datacenters is the latest company making a big bet on the prediction that delivering data to end users from large, centralized data centers alone won’t cut it in the future. When applications like the Internet of Things, autonomous vehicles, and virtual and augmented reality take off, the thinking goes, they will require computing infrastructure to be located close to end users to reduce latency and bandwidth costs.

The Dallas-based data center developer announced Tuesday that it has acquired two startups whose technology enables its new product: small data centers that can house edge computing infrastructure on factory floors, at big-box retail locations, at cell towers, or anywhere else a client may need it.

One of the startups, EdgePoint Systems, builds the edge data centers. The other, called BitBox USA, monitors and maintains such edge computing facilities on behalf of customers. EdgePoint was founded last year by Sharif Fotouh, who in his previous job as a network facilities and deployment manager at Google deployed Google Fiber Huts. A Google Fiber Hut is an aggregation and distribution point between a main fiber ring around a city and telecom cabinets from where fiber strands reach individual homes that subscribe to Google’s Gigabit internet service.

In a statement, Fotouh said Jon Trout, founder of BitBox, was also involved in deploying the huts: “Our solution is based on the experience Jon and I have gained from deploying hundreds of Google Fiber huts across the country.”

The same owner sold both companies to Compass, and terms of the deal have not been disclosed. Both founders have joined Compass’s management team and will continue leading their respective companies. EdgePoint Systems has been renamed to Compass EdgePoint.

The deal comes about one year after two investors, RedBird Capital Partners and Ontario Teachers Pension Plan, acquired a majority stake in Compass. Chris Crosby, the company’s co-founder and CEO, said at the time that the investment would fuel its next phase of growth and enable it to “scale by an order of magnitude.”

Compass’s strategy here to is provide customers with a full core-and-edge data center solution, which is a big departure from its traditional focus.

Since the company launched in 2011, it’s been building mid-size single-tenant data centers in second-tier US markets, leasing them to clients on a wholesale basis. Recently, however, it’s gone after hyper-scale cloud platforms like Microsoft and Google. Last year, Compass bought a large plot of land in Northern Virginia’s Loudoun County, where there are more hyper-scale data centers than anywhere on the planet. In January, it received planning approval to build a massive data center campus there and said “some of the major cloud providers” were already interested in data centers on the site.

More Competition than Compass Has Ever Had

A hyper-scale campus in the world’s top data center market, smaller facilities in secondary markets, and edge computing facilities wherever they’re needed make Compass a player in every segment of the market for providing shelter and supporting infrastructure for computing. They also mean more types of rivals to compete with.

Compass didn’t have much competition in secondary markets. While numerous data center colocation providers target those markets, there hasn’t been a pure-play wholesale player that’s gone specifically after locations like Minneapolis, Nashville, or Raleigh. In fact, Compass was launched as a secondary-market player specifically because the founders saw that those markets were underserved by the major providers.

Marketing its future campus in Northern Virginia, Compass is now competing with every major wholesale data center developer in the country: the likes of Digital Realty Trust, CoreSite, CyrusOne, RagingWire, Vantage Data Centers, and others. However, the nature of demand for data center capacity by the cloud giants in Northern Virginia has been such that providers haven’t been able to add inventory there fast enough. The biggest concern in the market recently has not been demand but a shortage of suitable land to build on.

At the extreme edge, Compass is now competing with numerous startups and mature data center providers. One of the startups is Vapor IO, whose vision is to surround a city with a network of edge nodes that together form a single distributed data center. Vapor has developed a lot of hardware and software technology to enable this and has a partnership with Crown Castle, the largest wireless tower operator in the US, to provide colocation services in its edge facilities located at wireless sites.

Another competitor is Digital Bridge, an internet infrastructure investor that operates wireless towers but also owns multiple data center providers, including C7 Data Centers, DataBank, and Vantage. DataBank has announced a plan to sell edge colocation services at cell towers, while its parent intends to package its various subsidiaries’ services as holistic infrastructure solutions that may include everything from core and edge data centers to wireless networks.