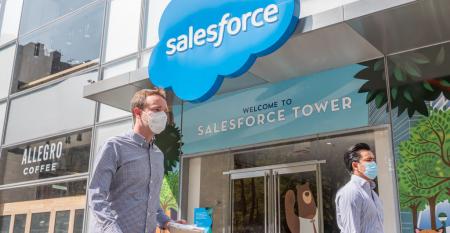 Salesforce-Backed OwnBackup Valued at $1.4 Billion in Funding
Jan 28, 2021
The startup helps clients including Zoom and Boston Dynamics protect their data on Salesforce platforms.

Cloud Database Startup Snowflake Vaults to $12B Valuation, Partners with Salesforce
Feb 10, 2020
Salesforce wants to "invest in the company as a condition of the partnership. They want to benefit from the...

Microsoft and Salesforce Strike Partnership, Helping Thaw Chilly Relations
Nov 15, 2019
Salesforce has agreed to connect some of its software with Teams and use Azure for its Marketing Cloud.

Salesforce to Buy Tableau for $15.3 Billion in Data Push
Jun 10, 2019
The takeover will mark Salesforce’s largest deal to date, according to data compiled by Bloomberg.

Salesforce Joins Blockchain Bandwagon With New Ledger Platform
May 30, 2019
Salesforce.com Inc. unveiled a blockchain service in a bid to boost revenue and keep up with peers in digital ledgers, joining a growing list of companies that have sought to harness the emerging technology.

MuleSoft-Docker Enterprise Integration Afoot, as Salesforce Invests in Docker
Nov 15, 2018
Salesforce’s MuleSoft and Docker are working on a tight integration to help enterprise step into the future.

Amazon, Salesforce Shifting Business Away From Oracle: Report
Jan 02, 2018
A news report says both have made progress to replace Oracle software, which has been widely used in their own data centers, with cheaper open source alternatives.

Zero One: Salesforce Partners Must Step Up Their Game
Nov 10, 2017
It’s no longer enough to develop an app or deliver a service in the Salesforce ecosystem, says a Salesforce channel executive.

Zero One: Are Dreamforce’s Big Dreams Deferred?
Nov 09, 2017
At Dreamforce in San Francisco, all the talk swirled around the so-called “Fourth Industrial Revolution,” but companies have...

You Can Now Plug Directly Into Salesforce Servers at Equinix Data Centers
Feb 15, 2017
Colocation giant has been pursuing connectivity deal with cloud CRM giant since at least 2015
Load More