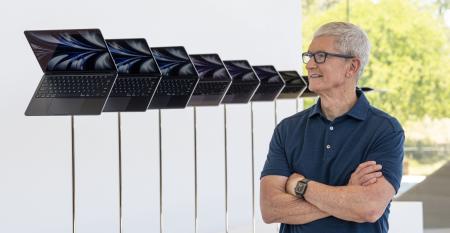 Apple to Source Chips from US Factory by 2024
Nov 16, 2022
Apple is expected to source its semiconductor chips from a factory in Arizona by 2024 according to Bloomberg News. There’s speculation...

Apple Recovers From Massive Outage
Mar 22, 2022
Yet another example of the vulnerability of services that rely heavily on the cloud.

Apple Drops Intel in Biggest MacBook Pro Overhaul in Years
Oct 19, 2021
With its new processors and devices, Apple is aiming squarely at the high-end chips that Intel has provided for the MacBook Pro and other top-end Macs for about 15 years.

The Chip-Crunch Recovery Will Be Rocky, as Apple Can Attest
Jul 29, 2021
The company says shortages will contribute to a lower rate of growth this quarter and get worse. And there’s an ironic wrinkle.

Apple Seeks More Time For Irish Data Center: Business Post
Jun 30, 2021
An extension would give the company until 2026 to construct the facility. It has until September under the current rules.

Apple to Spend $430B On Data Centers, Manufacturing, Offices in the US
Apr 26, 2021
The company is increasing its planned investments in the US by 20 percent over the next five years.

Apple Targeted in $50 Million Ransomware Hack of Supplier Quanta
Apr 21, 2021
The hacker, REvil, has published data it believes to be Apple’s proprietary blueprints for new devices.

AWS Unveils Cloud Service for Apple App Development on Mac Minis
Dec 01, 2020
It is the first cloud compute service from a major vendor that works for Apple’s macOS.

Court Refuses to Toss Apple's Suit Against Data Center Chip Startup Founder
Jan 21, 2020
The judge also dismissed a claim by Apple's ex-employee that the company invaded his privacy by reviewing text messages he wrote to coworkers.

Ex-Apple Exec Who Started Data Center Chip Firm Says He Was Snooped On
Dec 10, 2019
Nuvia founder claims Apple reviewed his confidential text messages before suing him for launching his own startup.
Load More