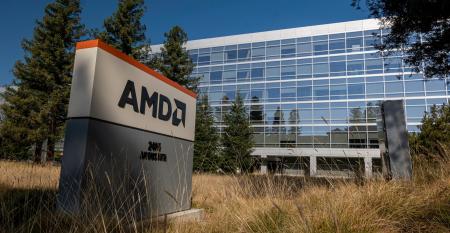 Biden Joins Tim Cook to Hail TSMC’s $40 Billion US Chip Venture
Dec 07, 2022
TSMC is set to boost investment in Arizona with a second facility. Apple and AMD will source advanced chips made...

AMD Beats Profit Estimates as It Pushes Deeper Into Servers
Nov 02, 2022
AMD beat analyst predictions for profits in Q3 by targeting the server market and Q4 is shaping up nicely for the chipmaker as well, beating others in the semiconductor chip space.

AMD Soars After Data Center Chip Sales Fuel Upbeat Forecast
May 04, 2022
AMD is gaining ground at the largest buyers of computer processors, owners of the giant data centers that are the backbone of the Internet.

China Approves AMD’s $35 Billion Acquisition of Xilinx
Jan 27, 2022
Buying Xilinx, a maker of programmable silicon, will take AMD into areas such as automotive and communications networking...

AMD Overhauls Its Epyc Server Processors, Aiming Once Again for the Sweet Spot
Mar 16, 2021
The Milan launch focused on supercomputing, but a chat with engineers shows that the company really wants the mid-range market back.
Load More