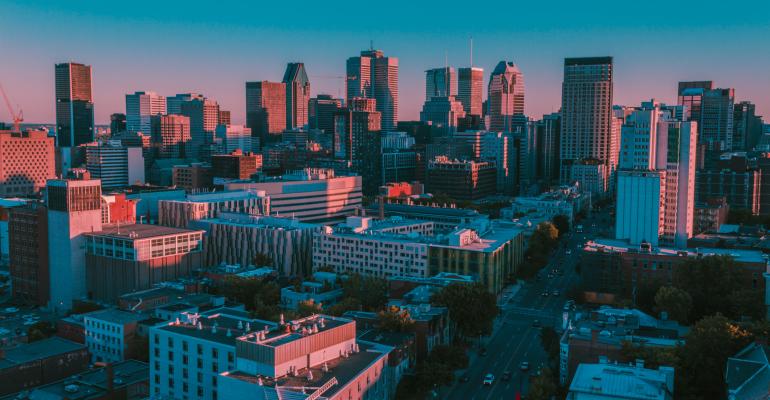 A panoramic view of Montreal
Companies>Cologix

The announcement came the same week Vantage Data Centers announced that it had agreed to buy Cologix’s smaller Canadian competitor 4Degrees, which also has a data center in Montreal, as well as one in Quebec City, marking the Santa Clara, California-based company’s entry into Canada, its first expansion outside of the US.

Both deals appear to be largely about hyperscale – massive data centers aimed primarily at the biggest cloud platforms, such as Amazon Web Services, Microsoft Azure, and Google Cloud Platform, all of whom launched cloud availability regions in Montreal in recent years.

Vantage is a hyperscale specialist, the biggest of its kind in the Silicon Valley market in terms of data center footprint. When it announced its 4Degrees deal, the company said it would immediately start expansion at its two Canadian sites to 31MW of capacity total.

Cologix’s specialization has been in retail colocation and interconnection, primarily in secondary North American markets. Majority-owned by Stonepeak Infrastructure Parners and Lead since earlier this year by CEO Bill Fathers, a former VMware cloud executive, it currently operates 25 data centers in nine markets, including Columbus, Dallas, Toronto, and Vancouver, among others.

Colo-D focuses on wholesale deals, and it’s reportedly had success in winning hyperscale business. In October it announced plans to build a third, 150MW data center campus just outside Montreal. The 22-acre property is included in the Cologix deal, a Cologix spokesperson told us via email.

Colo-D CEO Patrick David said last month that the company was seeing quick revenue growth because of its ability to cater to the needs of hyperscale cloud providers.

The two existing Colo-D facilities Cologix is taking over add 50MW of capacity to its current seven data centers in the Montreal market, the American company said in a statement.

Hyperscale clouds have chosen Montreal as their Canadian port of entry due primarily to availability of low-cost hydroelectric power in the metro. They’ve all committed to powering their platforms with clean energy, and those commitments have played a big role in their data center site selection decisions.

Energy company Hydro-Québec, which has been actively courting data centers, says its electricity rates are about four times lower than in California and 30 percent lower than in Virginia, whose northern region, located about 600 miles south of Montreal, is the world’s largest and fastest-growing data center market.